Lover’s separation is a theme widespread in the english balladry and that of a sailor and a young maid it’s probably originated in the eighteenth century, as we find it in the illustrations of the time.

LOVELY ON THE WATER

The ballad “Lovely on the water”, collected by Ralph Vaughan Williams in the early 1900s, come from a broadside titled “Henry and Nancy, or the Lover’s Separation“. The story begins in the idyll of spring with two lovers walking, but that’s their farewell, the sailor has enlisted in the Royal Navy and wants her to stay home waiting for him. Although he professed to face the war for his country, the need for a wage is certainly the primary cause of his patriotism.

Steeleye Span recorded Lovely on the Water in 1971 for their second album, “Please to See the King” and the sleeve notes commented”Certain folk songs had great popularity, and have been reported over and again, from end to end of the country. Others—including some masterpieces—seem to have had but tiny circulation. So Lovely on the Water, with a gorgeous melody and significant words, has been found only once, by Vaughan Williams at South Walsham, a few miles from Norwich. The song starts idyllically and ends ominously, like a sunny day that clouds over. The singer, a Mr Hilton, had fourteen verses, but Vaughan Williams, often a bit careless about texts, mislaid some. Missing verses probably concerned the familiar situation in which the girl volunteers to disguise herself as a seaman, in order to sail with her lover, but is hurriedly dissuaded.” (from here)
We find those missing verses in the text of the broadside “Henry and Nancy” (here)
Steeleye Span in “Please to See the King” 1971

Ken Wilson in “Not Before Time“

Martha Tilston in The Sea 2014  “For Maggie, thank you, its because of you that I sing at all” album dedicated to Maggie Boyle (in 1988 she and her husband were the pillars of the John Renbourn’s Ship Of Fools) who died in that 2014

LOVELY ON THE WATER *
I
As I walked out one morning
in the springtime of the year
I overheard a sailor boy
likewise a lady fair
They sang a song together
made the valleys for to ring
While the birds on the spray in the meadows gay
Proclaimed the lovely spring
II
Said Willy unto Nancy
“Oh we soon must sail away
For its lovely on the water
to hear the music play.
For our Queen she do want seamen
so I will not stay on shore
I will brave the wars for my country
Where the blund’ring cannons roar“
III
Poor Nancy fell and fainted,
but soon he brought her to,
For it’s there they kissed and they embraced
and took a fond adieu.
“Come change your ring (1) with me my love
For we may meet once more;
but there’s One above that will guard you, love,
Where the blund’ring cannons roar
IV
Four pounds it is our bounty
and that must do for thee
For to help the aged parents
while I am on the sea
For Tower Hill[2] is crowded
with mothers weeping sore (3)
For their sons are gone to face the foe
Where the blundering cannons roar”
Notes
1) the ring will be the proof of identity of the lovers who will sometimes remain separated for long years
2) Tower Hill in in London,London Borough of Tower Hamlets
3) while the men go to fight the enemy, the women greet them weeping because they know that many of them will never return home 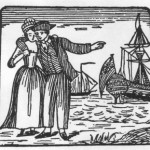 7 Risposte a “Lovely On The Water”

Leggi in italiano Greensleeves is a song coming from the English Renaissance (with undeniable Itali ...