A traditional Scottish song that Jamie sings as he leaves Claire one morning at Leoch to go off to work in the stables.
“.. singing rahter loudly the air from “Up Among the Heather”. The refrain floated back from the stairwell:
Sittin’ wi’ a wee girl holdin’ on my knee
When a bumblebee stung me, weel above the kneeee
Up among the heather, on the head o’ Bendikee

There are a lot of Scottish folk songs that tell of romantic encounters “amang the heather” this one is set over Bennachie Hills, the most famous and well-known of northeastern Scotland.
Located in the Garioch between the Don and the Gadie, Bennachie are a range of hills in Aberdeenshire. A destination for excursions, along many paths and running races like the Bennachie Hill Race. On the Mither Tap (the mother’s breast that takes its name from its shape) you can still visit the ruins of a Pitti fortress. 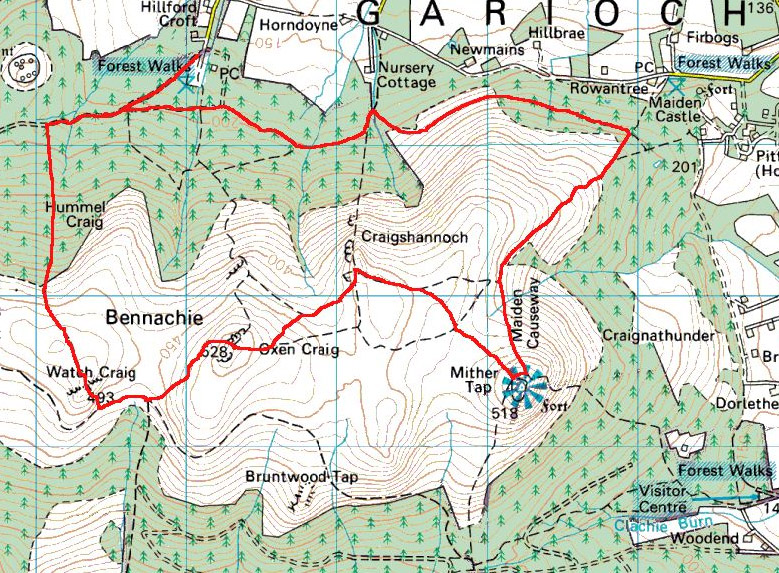 UP AMONG THE HEATHER

“Up Amang The Heather” or “The Hill of Bennachie” shares its melody with another traditional scottish song “Come All Ye Fisher Lasses”.

The song is a classic bothy ballad with bawdy lyrics! The poet talks the talk, but doesn’t walk because first he tells of having had fun (all day long) with a fine girl, but then he advises ladies not to give more than a kiss to a soldier!

From the Highlands of Robert Burns  to the Moorlands of Emily Bronte, and up to the Baraggia of Vercellese (Northern Italy), heather and erica populate the moorlands. “Calluna is differentiated from erica by its corolla and calyx each being in four parts instead of five, Calluna is sometimes referred to as Summer (or Autumn) heather to distinguish it from winter or spring flowering species of Erica.” (from wiki)
A branch of wild white heather is a lucky charm in Scotland and is donated to wish a happy marriage. Once upon a time the Scottish girls who ventured alone on the moor always wore a sprig of heather to protect themselves from rape and robbery (or to make a lucky encounter).

The Irish Rovers  the group has repeatedly recorded the song, this version is taken from “Still Rovin’” 1968

NOTE
1) (Irish Ramblers)
Up among the heather on the hellabenafee
It was there I had a bonny wee lass sitting on my knee
A bungbee stung me well above the knee
We rested down together on the hellabenafee
2) wee lass= tiny girl
3) bonnie lassie= fine girl
4) brae= hill
5)  a midsummer party called Bilberry Sunday (in Scotland “Blaeberry” in Ireland “Fraughan”). It was mostly celebrated in July, when the blueberry berries ripen or in August, often combined with the Lughnasa Celtic festival or on Sunday (or Monday) closest to the party. Once upon a time the youths and the young girls were up the hills on the moor from morning to evening gathering blueberries and making friends, it was therefore a party dedicated to courtship and to combine marriages (under the good offices of Lugh).
6) wee tin can =  female sexual organ
7) (Irish Ramblers)
Said I me bonny wee lassie are ya going to spend the day
Up amongst the heather on the hellabenafee
Where all the lads and lassies they’re having a sobree
Up among the heather on the hellabenafee
8) lads= boys
9) fiddle= male sexual organ
10)  (Irish Ramblers)
Said I me bonny wee lassie please take my advice
Don’t ever let a soldier laddie love you more than twice
For all the time you do, he’s a fixing how to plan
How to get a wee-be rattle at your old tin can
11) ould= old