“Farewell Lovely Nancy” or “Lovely Nancy” is a traditional ballad collected in 1905 by Cecil Sharp from Mrs. Susan Williams, Somerset (England), where the handsome sailor leaving for the South Seas, dissuades his sweetheart who would like to follow him disguising herself as a cabin boy, telling her that working aboard ships is not for females!

AL Lloyd writes in the notes to the LP “A Sailor’s Garland”: To dress in sailor’s clothes and smuggle oneself aboard ship was a pretty notion that often occurred to young girls a century or two ago, if the folk songs are to be believed. This song has been widely found in the south of England, also in Ireland.” 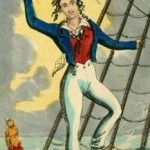 In the sea songs we find sometimes the theme of the girl disguised as a sailor who faces the hard life of the sea for loving and adventure.
The cross-dressing ballads are in fact mostly inherent in women who go to play a male job, such as the sailor or the soldier.

NOTES
1) in Sharp is “salt seas” but becomes “western ocean” in the version of A. L. Lloyd
2) in A. L. Lloyd becomes “My love, I’ll be ready to reef your topsail”.
3) the closing stanza in an Irish version written in Ancient Irish Music (1873 and 1888) by Patrick Weston Joyce says:
So farewell, my dearest Nancy, since I must now leave you;
Unto the salt seas I am bound for to go,
Where the winds do blow high and the seas loud do roar;
So may yourself contented be kind and stay on shore.