“Carrickfergus” comes from a Gaelic song titled Do Bhí Bean Uasal (see) or “There Was a Noblewoman” and is also known by the name of “The Sick Young Lover”, which appeared in a broadside distributed in Cork and dated 1840 and also in the collection of George Petrie “Ancient Music of Ireland” 1855 with the name of “The Young Lady”. Text and melody passed through the oral tradition have spread and changed, without leaving a consistent trace in the collections printed in the nineteenth century. This song has been attributed to the irish bard Cathal “Buí” 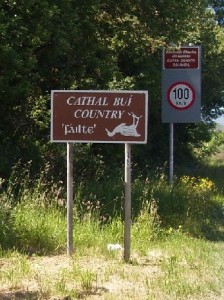 Cathal “Buí” Mac Giolla Ghunna (c1680-c1756) a rake-poet from Co. Cavan.
Curious character nicknamed “Buil” the yellow, a bard vagabond storyteller and composer of poems, which have spread throughout Ireland and are still sung today.
The scholar Breandán Ó Buachalla has published his collection in the book “Cathal Bui: Amhráin” in 1975. In Blacklion County of Cavan there is also a small stele in his memory and it is celebrated the Cathal Bui Festival (month of June).
A incomplete priest able with words and with women, he also had a lot of “irish humor” and was obviously a heavy drinker, he went around Breifne, the Irish name of the area including Cavan, Leitrim, and south of Fermanagh ( one of the many traveler with his caravan or even less).

But it is the version known by Peter O’Toole that was the origin of the version of Dominic Behan recorded in the mid-1960s under the title “The Kerry Boatman“, and also the version recorded by Sean o’Shea always in the same years with the title “Do Bhí Bean Uasal”. Also the Clancy Brothers with Tommy Makem made their own version with the title “Carrickfergus” in the 1964 “The First Hurray” LP.

This version has been attributed musically to Seán Ó Riada (John Reidy 1931-1971) it is not clear if it is only an arrangement or a real writing of the melody. Certainly the text is taken from the poetry of Cathal “Buí” Mac Giolla Ghunna.

THE VERSION OF THE YEARS 60 AND MEANING

And we come to what remains of this song in our day, that is the version of Carrickfergus spread by the major interpreters of Celtic music.
The sweet melancholy of the melody and its uncertain textual interpretation have made the song very popular, some capture the romantic side and also play it at weddings, others at the funeral (for example that of John F. Kennedy Jr -1999).
Certainly it has something magical, sad and nostalgic, the man drowns in alcohol the pain of separation from his beloved (or more likely he drinks because he has a particular predilection for alcohol): a vast ocean divides them (or a stretch of sea) and he would like to be in Ireland, in Carrickfergus: he would like to have wings or to swim across the sea or more realistically find a boatman to take him to her, and finally he can die in her arms ( or at her tombstone) now that he is old and tired.

In my opinion, the general meaning of the text remains clear enough, but if you go into detail then many doubts arise, which I tried to summarize in the notes.

NOTES
1) Carrickfergus (from the Gaelic Carraig Fhearghais, ‘Rocca di Fergus’) is a coastal town in County Antrim, Northern Ireland, one of the oldest settlements in Northern Ireland. Here the protagonist says he wants to be at Carrickfergus (but evidently he is somewhere else) while in other versionssays “I wish I had you in Carrickfergus”: the meaning of the song changes completely.
Some want to set the story in the South of Ireland and they see the name of Fergus,as the river that runs through Ennis County of Clare.
2) Ballygran – Ballygrant – Ballygrand. There are three interpretations: the first that Ballygrant is in Scotland on the Hebrides (Islay island), the second that is the village of Ballygrot (from the Gaelic Baile gCrot means “settlement of hills”), near Helen’s Bay that it is practically in front of Carrickfergus over the stretch of sea that creeps over the north-east coast of Ireland (the Belfast Lough). It seems that the locals call it “Ballygrat” or Ballygrant “and that it is an ancient settlement and that at one time there were some races with the Carrickfergus boats at Ballygrat.The third is a corrupt translation from the Gaelic” baile cuain “of the eighteenth-century version and therefore both a generic quiet location, a small village.
But between the two sentences there is already an incongruity or better there is need of an interpretation, ascertained that Ballygrant is not a particular place of Carrickfergus for which the protagonist feels nostalgia for some specific connection with his love story passed in youth, then it is the place where it is at the moment. So the protagonist could be an Irishman who found himself in the Hebrides, but who would like to return to Carrickfergus from his old love or he is a Scot (who was a young soldier in Ireland) and remembers with regret the Irish woman loved in youth.
The protagonist could be in Helen’s Bay on the opposite side of the inlet that separates it from Carrickfergus: if he were healthy and young nothing would prevent him to go to Carrickfergus even on foot, but he is tired and he is dying and so in his fantasy or delirium he is looking at the sea in the direction of Carrickfergus deaming of flying towards his love of the past or he wants to be ferried by a boatman to be able to die next to her.
3) “and die” tells us that the protagonist who is in Ballygrant (wherever he is) would like to go to Carrickfergus to die in the arms of his love of youth.
In other versions the phrase is written as “To ferry me over my love and I” the protagonist would like to be transported by the boatman, together with his woman, to Carrickfergus. So nostalgia is about the place where the protagonist is supposed to have spent his youth and would like to see again before he died.
4) and 5)
Now on the Kilkenny stone it is written,
on black marble like ink,
with gold and silver I would like to comfort her
Replacing the verb “to transport” used by Loreena with “to support” more used in other versions. That is: on the black stone of Kilkenny (in the sense that it is usually a type of stone such as Carrara marble,  the black stone extracted from Kilkenny but also used in Ballygrant, wherever it is) that will be my tombstone where I have recorded my epitaph, I also wrote a sentence of comfort for my love
4) Kilkenny = Kilmeny some see a typo and note that Kilmeny is the parish church of Ballygrant (Islay Island) formerly a medieval church, also here there is a stone quarry, which was the main industry of Ballygrant in the eighteenth century and XIX. Now I ask myself: but with all these references to the Islay Island, (where at least there should be the tomb of the protagonist) how is it that the song is not known in the local tradition of the Hebrides and instead is it in Belfast?
6) the protagonist urges his friends to bury him

Jim McCann live (with the second stanza written by Dominic Behan for his version recorded in the mid-1960s under the title “The Kerry Boatman”.