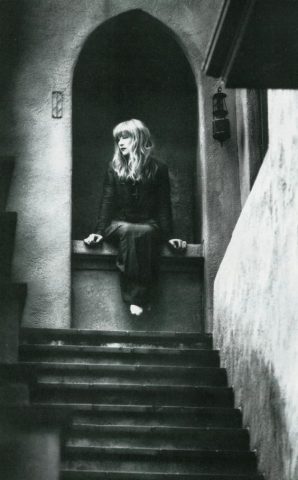 Loreena McKennitt (Morden, 1957) has often been called a goddess of Harmony for her beautifull voice (lyrical singing with the Celtic technique of the “old style” Sean-nós) combined with the charming amber-haired figure.
A clever multi-instrumentalist (piano, Celtic harp, dulcimer, accordion) and composer, as well as a tenacious supporter of her musical project defined by herself as “eclectic Celtism“.
Her activity as a musician began in the corners of the Canadian streets where she played and sang the traditional Irish music with her harp and she self-produced her CD: Elemental, Parallel Dreams and The visit are essential musical projects, practically filmed live; the breakthrough comes with “The Mask and the Mirror” (1994), a concept album immersed in world music along the path of Santiago that welds the spirituality (and music-prayer) of Islam, Christianity and Judaism.
Loreena usually picks some musicians proficient in instruments related to each album to record with, but her core members are: guitarist Brian Hughes & percussionist Rick Lazar (both 1989), and violinist Hugh Marsh (1991). Cellist Caroline Lavelle & keyboardist/percussionist Donald Quan joined in 1995.

The debut album of the Canadian singer (Irish father and Scottish mother) when she was still playing on the street with her celtic harp and the offer box, it was recorded in a Stratford barn with almost all of the traditional Irish songs.
Blacksmith
She Moved Through the Fair
Stolen Child
The Lark
Carrighfergus
Kellswater
Banks of Claudy
Come by the Hills
Lullaby

To Drive the Cold Winter Away 1987

The album consists of winter and Christmas songs, recorded in part at Annaghmakerrig, in County Monaghan (Ireland), in the Benedictine Abbey of Glenstal in Limerick (Ireland) and in the Church of Our Lady in Guelph, Ontario, in Canada. Essential and sparse it is centered on the angelic vocalism of the artist, so the author writes in the notese “As a child my most vivid impression of music for the winter season came from songs and carols recorded in churches or great halls, rich with their own unique ambience and tradition. In that spirit, I have ventured into several similar locations that I have come to cherish in my travels.”
In Praise of Christmas
The Seasons
The king (Hunting the Wren)
Banquet Hall
Snow ( lyric by Archibald Lampman)
Balulalow
Let Us the Infant Greet
The Wexford Carol
The Stockford Carol

Let all that are to Mirth Inclined

“I have long considered the creative impulse to be a visit – a thing of grace, perhaps, not commanded or owned so much as awaited, prepared for. A thing, also, of mystery. This recording endeavours to explore some of that mystery.
It looks as well into the earlier eastern influences of the Celts and the likelihood that they started from as far away as Eastern Europe before being driven to the western margins of Europe, particularly in the British Isles. With their musical influences came rituals around birth and death which treated the land as holy and haunted; this life itself as a visit. Afterwards, one’s soul might move to another plane, or another form – perhaps a tree. The Celts knew then, as we are re-learning now, a deep respect for all the life around them. This recording aspires to be nothing as much as a reflection into the weave of these things.” – L.M. (from here)

The Lady of Shalott
Greensleeves
Tango to Evora: Loreena wrote the music on commission, for the soundtrack of the documentary “The Burning Times” by the Canadian director Donna Read, on witchcraft and the bonfires ( (a feminist re-interpretation of the witchcraft trials). A few years later Haris Alexiou writes a text that is a small fairy tale wrapped in the Greek myth and titled “Nefelis Tango”

Loreena McKennitt reads the book of Idries Shah “The Sufi” (1964) and composes an album “The Mask and Mirror” (1994) in which she asks herself about spirituality and religion: “… Who was God? And what is religion, spirituality? What was revealed and what was hidden … what was the mask and what was the mirror? ”
And she does so by exploring mysticism, the violent, sudden, irruption of God in the soul.

Live in Paris and Toronto 1999

In the Bleak Midwinter

It is the cd that decrees the worldwide success of Loreena and leads her to face a world tour in spring 1998; in the summer of that year, near the wedding, the fiancé drowns during a boat crossing in Lake Huron, to his memory the artist dedicates the double “Live in Paris and Toronto” (1999): a magnificent live, sublime, a perfect performances and a wealth of sounds, a magical fusion between the expressiveness of each individual musician, with little gems of pure beauty in the note-for-note.

The Highwayman
La Serenissima dedicated to Venice and the Venetian Baroque

Seven years of silence followed (with the exception of the collaboration with the Chieftains for the track YOU RAMBLING BOYS OF PLEASURE in Tears of Stone 1999) and of travels for the Mediterranean between 2000 and 2005, in particular Greece. A wanderer who wins the nickname of Irish gypsy

Some of the songs on this album were premiered at the Alhambra in Granada (Spain) on the dates 14, 15 and 16 September 2006 to inaugurate the return to the artist’s stage; of the concerts was released a memorable live album entitled “Nights from the Alhambra”.
The publication of the album An Ancient Muse was followed by a tour (in 2007)
Incantation
The Gates of Istanbul
Caravanserai
The English Ladye and the Knight ( lyric by Sir Walter Scott)
Kecharitomene

The Wind That Shakes the Barley 2010

Breaking of the Sword
Lost Souls

King Herod and the cock