The phrase “The Wind that Shakes the Barley” can cause some confusion as it has been used to indicate several things. More recently as a movie title, in ancient times as a dance music title, a reel with probable Scottish origins, and not least as an Irish song title.

Directed by Ken Loach on the most recent Irish War of Independence (1919-1921), the film is inspired by the title of the Irish song: a young Irishman named Micheail, in the rural village of County Cork- has been brutally and futilly murdered by an English gang of ‘Black and Tans’ and his body is ready to be buried. His family and friends gather around the body and sing softly “The Wind that Shakes the Barley”
‘Twas harder still to bear the shame
of foreign chains around us
So the protagonist of the film (2006), Damien joins his brother Teddy in a “flying column” of the Irish republican army. 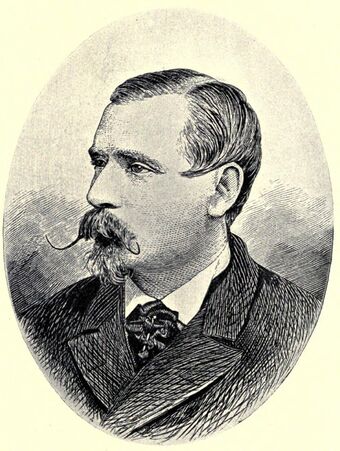 The song is a perfect combination of love and rebel song taken from the poem of the same name published in “Ballads, Romances and Song” by Robert Dwyer Joyce in 1861 and combined with the melody “The old love and the new love. ” In 1872 Robert Dwyer emigrated to Boston, where he reprinted his Irish poems with some new texts in “Ballads of Irish Chivalry”.Robert Dwyer Joyce (1836–1883) originally from Limerick, an Irish poet, physician and professor of English literature at the Catholic University of Dublin (brother of Patrick Weston Joyce famous collector of Irish folk songs), was a political activist in the Fenian movement, and to avoid arrest, he left Ireland in 1866 to return to Dublin only in 1883, shortly before his death. 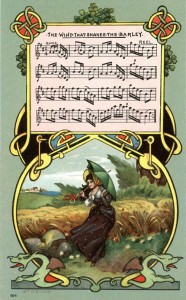 “The Wind that Shakes the Barley” has become the symbol of the Irish rebels of 1798, it seems that on the mass graves where the “croppy boys” were buried, barley grew, sprouted from the food rations they carried in their pockets; thus the spirit of Irish nationalism reborn and could not be destroyed. Therefore, it does not indicate only one season, summer, it is also the image that evokes pain in the protagonist: the moment of choice between love for the family and the homeland, the death of the beloved and the hard revenge.The young man, having made the difficult decision to fight alongside the rebels, is forced to abandon his girlfriend, perhaps forever. The uncertainties and doubts that beset him vanish when the British kill the girl: he, clutching his beloved’s dying body, decides to embrace the fight and seek revenge, with no more doubts or remorseIn fact, the love for the ideal, when fully embraced, is increasingly burning and totalizing than sensual love, but revenge, the “blood for blood” is not enough to appease the soul of the protagonist, who has become inconsolable, and his thoughts will go to her grave where he soon hopes (or fears) to be reunited.

There are some textual variations of the poem, the most used text in the songs is the one appeared in print in 1962 in “Irish Songs of Resistance” written by Patrick Galvin which however reports only 4 of the 5 original stanzas (the fourth verse is omitted), a version identical is published in Martin Walton‘s “New Treasury of Irish Songs and Ballads” (Part 1, 1968), in which the same melody is reported with the title of Royal Charlie (previously paired by Alfred Percival Graves in ‘The Irish Song Book’ , 1894) (here)

REEL
The reel, unrelated to the text of Robert Dwyer Joyce’s poem, is found in Scotland in “The Athole Collection”, James Stewart Robertson, 1884 and in “The Skye Collection”, Keith Norman MacDonald, 1887

The Chieftains The Wind That Shakes The Barley/The Reel With The Beryl, 1978

There are also excellent versions of Amanda Palmer or Declan de Barra, etc, etc .. but my favorite version is
Loreena McKennitt in Troubadours On The Rhine (2012)

JIG
Accelerated rhythm that clashes with the sad and desperate tone of the text to which the first melody befits better.
Solas in Sunny Spells and Scattered Showers, 1997 the fourth stanza is skipped, the text follows more the original draft of Robert Dwyer Joyce as reported however in the variant of Patrick Galvin

Robert Dwyer Joyce
I
I sat within the valley green,
I sat me with my true love,
My sad heart strove the two between,
The old love and the new love,—
The old for her, the new that made
Me think on Ireland dearly,
While soft the wind blew down the glade
And shook the golden barley.
II
‘Twas hard the woeful words to frame
To break the ties that bound us,—
‘Twas harder still to bear the shame
Of foreign chains around us;
And so I said, “The mountain glen
I’ll seek next morning early,
And join the brave United men!”
While soft winds shook the barley.
III
While sad I kissed away her tears,
My fond arms round her flinging (3),
The foeman’s shot burst on our ears,
From out the wildwood ringing, (4)—
The bullet pierced my true love’s side,
In life’s young spring so early,
And on my breast in blood she died
While soft winds shook the barley!
IV
I bore her to the wildwood screen,
And many a summer blossom
I placed with branches thick and green
Above her gore-stain’d bosom:—
I wept and kissed her pale, pale cheek,
Then rushed o’er vale and far lea,
My vengeance on the foe to wreak,
While soft winds shook the barley!
V
And blood for blood without remorse
I’ve ta’en at Oulart Hollow,—
I’ve placed my true-love’s clay-cold corse
Where I full soon will follow;
And round her grave I wander drear,
Noon, night, and morning early,
With breaking heart whene’er I hear
The wind that shakes the barley!

Harry Hibbs in Between Two Trees 1976

I
I sat within the valley green
I sat with my true love
My poor heart had to choose between
Old Ireland and my love
I looked at her and then I thought
How Ireland was torn
While soft the wind blew down the glen
And shook the golden corn
II
T’was hard the woeful words to bring
To break the ties that bound
But harder still to bear the shame
Of English chains around
And so I said, the mountain glen
I’ll seek in early morn
And join the brave united men
While soft winds shook the corn

Una risposta a “The Wind that Shakes the Barley”

Leggi in italiano Under the title Hieland laddie (Highland lassie) a series of texts are grouped wit ...