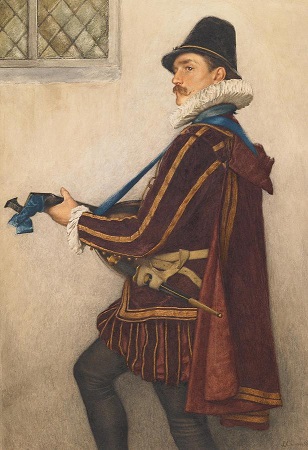 Davide Rizzio (Rizzo) known in Scotland as David Riccio (around 1533-1566), probably born in Pancalieri in the province of Turin, was court musician and chief favourite of Queen Mary Stuart.

The handsome Davide (although the detractors describe him as ugly, small and hunchbacked) was at the service of the House of Savoy and went to Scotland in 1561 following the Turin delegation; he liked it so much (some insinuate that he was a Catholic spy), that he managed to enter the service of the Queen, for his talents as a musician and an excellent singer. Four years later he was appointed chief favourite of the Queen, who meanwhile married Lord Darnley – that is Henry Stewart or Stuart, grandson of Henry VIII – but soon the friendship with the king broke (see another scandal related to the ballad “The four Maries“) and Riccio was accused of high treason (as alleged lover of the Queen as well as presumed father of the unborn child): but the conspirators did not bother to prove the accusation and went directly to the murder (with the favorite weapon of the time : the stiletto).
A death that cried revenge and Lord Darnley was assassinated just the year after the death of his rival. Evidently the Queen was not very attached to her king, if she named Giuseppe Riccio (brother of David) as her new secretary (who obviously was tried – then acquitted – on the charge of being among the agents of the king’s murder , if not one of the material executors)!
The gossip behind all this murky affair is that James VI (the future king of Scotland and England) could be of Piedmontese blood!

Among the seven tunes attributed to Riccio by William Thompson in “Orpheus Caledonius”, one is Auld Rob Morris (or Auld Bob Morrice) even if in the second edition of “Orpheus Caledonius” this attribution was omitted.
“This tune can be found in the Leyden manuscript, written in Lyra-viol tablature, which probably dates from the 1690s. It can also be found in one of the Blaikie manuscripts in Viol de Gamba tablature dated 1692, under the name “Jock the Laird’s Brother”.
Later it was published in The Orpheus Caledonius (1725), Watt’s Musical Miscellany (1730) and Craig’s Select Scottish Tunes (1730). Words existed to the tune, published in Allan Ramsay’s Tea Table Miscellany (1724)”(from here)
The original text version reported by Allan Ramsay and attributed to David Riccio is a contrast between a mother and her daughter about a too old suitor!

Mother:
There’s auld rob Morris that win’s in yon glen,
He’s the king of good fellows and wyle of auld men.
Has fourscore of black sheep, and fourscore too,
Auld rob Morris is the man you maun loo.
Daughter:
Oh had your tongue, mother, and let that abee,
For his eild and my eild will never agree:
Thei’ll never agree, and that will be seen
For he is fourscore, and I’m but fifteen.
Mother:
Then had your tongue, daughter, and lay by your pride,
For he’s be the bridegroom, and ye’s be the bride;
He shall lye your side, and kiss you too,
And auld rob Morris is the man you may loo.
Daughter:
But auld rob Morris I never will hae,
His back is so stiff, and his beard is grown gray;
I had rather die than live with him a year,
Sae mair of rob Morris I never will hear.

We find the arrangement of the melody made by another “Italian” composer Francesco Geminiani (Lucca 1687 – Dublin 1762).

Robert Burns  rewrites the text in 1792 starting from the first verses reported in Tea Table Miscellany and attributed to David Riccio; the song had a fair fortune with the German title of “Der alte Rob Morris”, Max Bruch arranged a classic version in “Zwölf schottische Volkslieder” (Twelve Scottish folk songs, 1863).

The situation imagined by Burns is a love affair between an old man (auld is actually an adjective that is used indiscriminately in the Scottish dialect, without necessarily corresponding to an advanced age), but wealthy local lord – Auld Rob Morris- and a young man beautiful, but without substances; they vie for the heart of a lady of the upper class (there is no hope for the young man!)

"Billy Boy, Where are you been all the day?"