May traditions have been preserved in various parts of Europe until the twentieth century: in England it was drastically interrupted at the outbreak of the First World War, it was taken sporadically and kept alive by many Mummers and Morris Dancers, until today.
Generally, as was the ancient tradition, the youngsters of the village went to the woods to pick up the branches of May, (“going a-Maying“), and to bring the May to the country (“the bringing home the May“), mostly dressed up or with costumes extravagant: there were a couple of newlyweds and other figures even more picturesque with special names depending on the place and tradition.

In the nineteenth century the Mummers in Ireland and Brittany took part in the May festival both in the begging songs and to bring May and dance around the May Pole.

Loreena McKennitt from “The Book of Secrets” 1997

Also in Italy the chronicles of the time in Romagna (italian region)
“… In the springtime of the year on the night electrifying the youth, young people rush for to sing May under the windows of their favorites.At the same time, you can hear a lot of young girls singing songs by placing on their windows and their doors tree branches with flowers, that is they have planted the May “(Placucci – 1818).
“on the first day of May lovers take a branch of acacia in bloom and go early in the morning to plant it or near the door, or near a window of the beloved: sometimes they attach to this branch gifts such as brooches, handkerchiefs or other, then they sing ” (Bagli – 1885) –translated from here

In England throughout the nineteenth century, various may songs dating back to popular tradition are documented: the Mayers began their itinerant beggin in mid-April singing the May, and ended on the evening of April 30th. They was in small groups of five or six men who accompanied themselves in singing with the violin or flute.
These Mayers are the echo of the cheerful brigades that since the Middle Ages brought the May into the houses: a “Queen of the May” was elected among the most beautiful girls in the village and they danced and singed together around the May Pole.

The Mayers wandered both during the night and during the day and had songs for the night and songs for the day often on the same melody. The Night songs were sung on April 30 to leave the May branches at the doors of their neighbors with the request for food and drink. The Day songs were the songs of the 1st of May those more properly of begging in which they asked for coins in exchange for good luck songs. 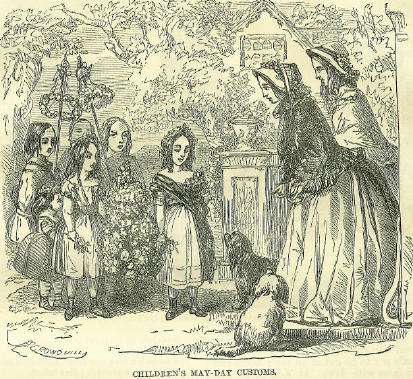 Also the children were wandering the streets, as for the Wassaling and the Christmas caroling even in spring the children went from house to house for begging, singing a series of verses (learned from the mother): they carried in procession the May garland with a little doll placed between a wreath of flowers and ribbons hanging from a pole (see) and receiving coins and some food-drinks in exchange for the auspicious verses.

Martin Carthy writes  in his album “Holy Heathens and the Old Green Man”, 2006: “There must be dozens of May Day songs from all over the country and the collector Fred Hamer had his own extensive collection, a selection of which was printed in the EFDSS journal* of 1961 along with an article on the subject. He says that a part of the ritual saw Mayers making their feelings known about particular individuals while they were doing their rounds. It was important for people to have the branch of May placed at their doors because a lack of it would certainly be seen as more than just a slight: but indeed it went further. A briar might be left to indicate a liar, and either elder or hemlock and stinging nettles for people of bad moral character; in all probability there were other examples as well.” (* Journal of The English Folk Dance & Song Society)

MAY DAY SONG  (May Day Carol) IN ENGLAND