The text of “Follow me up to Carlow” was written in the nineteenth century by the Irish poet Patrick Joseph McCall (1861 – 1919) and published in 1899 in the “Erinn Songs” with the title “Marching Song of Feagh MacHugh”.
Referring to the Fiach McHugh O’Byrne clan chief, the song is full of characters and events that span a period of 20 years from 1572 to 1592.

McCall’s intent is to light the minds of the nationalists of his time with even too detailed historical references on a distant epoch, full of fierce opposition to English domination. 16th century Ireland was only partly under English control (the Pale around Dublin) and the power of the clans was still very strong. They were however clans of local importance who changed their covenants according to convenience by fighting each other, against or together with the British. In the Tudor era Ireland was considered a frontier land, still inhabited by exotic barbarians.

The land of the O’Byrne clan was in a strategic position in the county of Wicklow and in particular between the mountains barricaded in strongholds and control posts from which rapid and lethal raids started in the Pale. The clan managed to survive through raids of cattle, rivalries and alliances with the other clans and acts of submission to the British crown, until Fiach assumed the command and took a close opposition to the British government with the open rebellion of 1580 that broke out throughout the Leinster . In the same period the rebellion was reignited also in the South of Munster (known as the second rebellion of Desmond)

The new Lieutenant Arthur Gray baron of Wilton that was sent to quell the rebellion with a large contingent, certainly gave no proof of intelligence: totally unprepared to face the guerrilla tactics, he decided to draw out the O’Byrne clan, marching in the heart of the county of Wicklow, the mountains! Fiach had retired to Ballinacor, in the Glenmalure valley, (the land of the Ranelaghs), and managed to ambush Gray, forcing him to a disastrous retreat to the Pale. 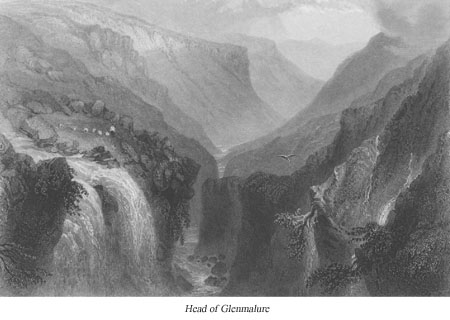 The melody was taken from McCall himself by “The Firebrand of the Mountains,” a march from the O’Byrne clan heard in 1887 during a musical evening in Wexford County. It is not clear, however, if this historical memory was a reconstruction in retrospect to give a touch of color! It is very similar to the jig “Sweets of May” (first two parts) and also it is a dance codified by the Gaelic League.

“Follow me up to Carlow” (also sung as “Follow me down to Carlow”) was taken over by Christy Moore in the 1960s and re-proposed and popularized with the Irish group Planxty; recently he is played by many celtic-rock bands or “barbarian” formations with bagpipes and drums.

NOTES
1) Brian MacCahir Cavanagh married Elinor sister of Feagh MacHugh. In 1572 Fiach and Brian were implicated in the murder of a landowner related to Sir Nicholas White Seneschal (military governor) of the Queen at Wexford.
2) William Fitzwilliam “Lord Deputy” of Ireland, the representative of the English Crown who left office in 1575
3) In 1572 Brian MacCahir and his family were deprived of their properties donated to supporters of the British crown
4) Arthur Gray de Wilton became in 1580 new Lieutenant of Ireland
5) appellation with which he was called Feach MacHugh O’Byrne
6) Glenmalure Valley: valley in the Wicklow mountains about twenty kilometers east of the town of Wicklow, where the battle of 1580 occurred that saw the defeat of the English: the Irish clans ambushed the English army commanded by Arthur Wilton Gray made up of 3000 men
7) In 1594 the sons of Feach attacked and burned the house of Pierce Fitzgerald sheriff of Kildare, as a result Feach was proclaimed a traitor and he become a wanted crimunal
8) Feach in Irish means Raven
9) William Fitzwilliam returned to Ireland in 1588 once again with the title of Lieutenant, but in 1592 he was accused of corruption
10) Carlow is both a city and a county: the town was chosen more to rhyme than to recall a battle that actually took place: it is more generally an exhortation to take up arms against the British. Undoubtedly, the song made her famous.
11) Glen Imael, Tassagart and Clonmore are strongholds in Wicklow County
12) English Pale are the counties around Dublin controlled by the British. The phrase “Beyond the Pale” meant a dangerous place
13) Rory the young son of Rory O’More, brother of Feagh MacHugh, killed in 1578
14) Sir Nicholas White Seneschal of Wexford fell seriously ill in the early 1590s, shortly thereafter fell into disgrace with the Queen and was executed.
15) in the original version the character referred to is Sir Ralph Lane but is more commonly replaced by Arthur Gray who had left the country in 1582
16) Elizabeth I. Actually it was Feach’s head to be sent to the queen!
The new viceroy Sir William Russell managed to capture Fiach McHugh O’Byrne in May 1597, Feach’s head remained impaled on the gates of Dublin Castle.