When the great oak of Portmore was break down in 1760, someone wrote a song known as “The Highlander’s Farewell to Bonny Portmore“; in 1796 Edward Bunting picked it up from Daniel Black, an old harpist from Glenoak (Antrim, Northern Ireland), and published it in “Ancient Music of Ireland” – 1840.
The age-old oak was located on the estate of Portmore’s Castle on the banks of Lugh Bege and it was knocked down by a great wind; the tree was already famous for its posture and was nicknamed “the ornament tree“. The oak was cut and the wood sold, from the measurements made we know that the trunk was 13 meters wide. 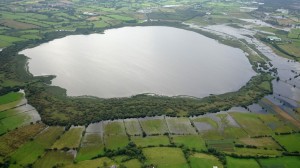 Loch un Phoirt Mhóir (lake with a large landing place) is an almost circular lake in the South-West of Antrim County, Northern Ireland, today a nature reserve for bird protection.
The property formerly belonged to the O’Neill clan of Ballinderry, while the castle was built in 1661 or 1664 by Lord Conway (on the foundations of an ancient fortress) between Lough Beg and Lough Neagh; the estate was rich in centenarian trees and beautiful woods; however, the count fell into ruin and lost the property when he decided to drain Lake Ber to cultivate the land (the drainage system called “Tunny cut” is still existing); the ambitious project failed and the land passed into the hands of English nobles.
In other versions more simply the Count’s dynasty became extinct and the new owners left the estate in a state of neglect, since they did not intend to reside in Ireland. Almost all the trees were cut down and sold as timber for shipbuilding and the castle fell into disrepair.

Bonny Portmore could be understood symbolically as the decline of the Irish Gaelic lords: pain and nostalgia mixed in a lament of a twilight beauty; the dutiful tribute goes to Loreena McKennitt who brought this traditional iris  song to the international attention.
Loreena McKennitt in The Visit 1991
Nights from the Alhambra: live

CHORUS
O bonny Portmore,
you shine where you stand
And the more I think on you the more I think long
If I had you now as I had once before
All the lords in Old England would not purchase Portmore.
I
O bonny Portmore, I am sorry to see
Such a woeful destruction of your ornament tree
For it stood on your shore for many’s the long day
Till the long boats from Antrim came to float it away.
II
All the birds in the forest they bitterly weep
Saying, “Where will we shelter or where will we sleep?”
For the Oak and the Ash (1), they are all cutten down
And the walls of bonny Portmore are all down to the ground.
NOTE
1) coded phrase to indicate the decline of the Gaelic lineage clans

Dan Gibson & Michael Maxwell in Emerald Forest instrumental version
And here I open a small parenthesis recalling a personal episode of a long time ago in which I met an ancient tree: at the time I lived in Florence and I had the opportunity to turn a bit for Tuscany, now I can not remember the location, but I know that I was in the Colli Senesi and it was summer; someone advised us to go and see an old holm oak, explaining roughly to the road; in the distance it seemed we were approaching a grove, in reality it was a single tree whose foliage was so leafy and vast, the old branches so bent, that to get closer to the trunk we had to bow. I still remember after many years the feeling of a presence, a deep and vital breath, and the discomfort that I tried to disturb the place. I do not exaggerate speaking of fear at all, and I think that feeling was the same feeling experienced by the ancient man, who felt in the centenarian trees the presence of a spirit.
SOURCE
http://www.angelfire.com/ca/immie/bonny.html
http://www.sentryjournal.com/2010/10/11/the-fate-of-bonny-portmore/
http://mudcat.org/thread.cfm?threadid=15567
http://www.rspb.org.uk/reserves/guide/p/portmorelough/about.aspx