Amhrán Na Craoibhe (in englishThe Garland Song)  is the processional song in Irish Gaelic of the women who carry the May branch (May garland) in the ritual celebrations for the festival of Beltane, still widespread at the beginning of the twentieth century in Northern Ireland (Oriel region).

The song comes from Mrs. Sarah Humphreys who lived in the county of Armagh and was collected in the early twentieth century, erroneously called ‘Lá Fhéile Blinne‘ (The Feast of St Blinne) because it was singed in Killeavy for the Feast of St Moninne, affectionately called “Blinne“, a clear graft of pre-Christian traditions in the Catholic rituals.
“The song is unique to the south-east Ulster area and was collected from Sarah Humphreys who lived in Lislea in the vacinity of Mullaghban in Co. Armagh. The air of the song from Cooley in Co. Louth survived in the oral tradition from my father Pádraig. It was mistakenly called ‘Lá Fhéile Blinne’ (The Feast of St Blinne) by one collector. Though it was sung as part of the celebrations of Killeavy Pattern it had no connection with Blinne or Moninne, a native saint of South Armagh, but rather the old surviving pre-Christian traditions had been incorporated into Christian celebrations. The district of ‘Bealtaine’ is to be found within a few miles of Killeavy where this song was traditionally sung, though the placename has been forgotten since Irish ceased to be the vernacular of the community within this last century. Other place names nearby associated with May festivities are: Gróbh na Carraibhe; The Grove of the Branch/Garland (now Carrive Grove) Cnoc a’ Damhsa; The Hill of Dancing (now Crockadownsa).” (Pádraigín Ní Uallacháin, 2002, A Hidden Ulster)
St Moninna of Killeavy died in 517-518, follower of St Brigid of Kildare, her names “Blinne” or “Moblinne” mean “little” or “sister” (“Mo-ninne” could be a version of Niniane, the “Lady of the Lake” of the Arthurian cycle); according to scholars her name was Darerca and her (alleged) tomb is located in the cemetery of Killeavy on the slopes of Slieve Gullion where it was originally located her monastery of nuns, become a place of pilgrimage throughout the Middle Ages along with her sacred well, St Bline’s Well.

It seems that the name of Baptism of this virgin, commemorated in the Irish martyrologists on July 6th, was Darerca, and that Moninna is instead a term of endearment of obscure origin. We have her Acta, but her life was confused with the English saint Modwenna, venerated at Burton-on-Trent. Darerca was the foundress and first abbess of one of Ireland’s oldest and most important female monasteries, built in Killeavy (county of Armagh), where the ruins of a church dedicated to her are still visible. He died in 517. Killeavy remained an important center of religious life, until it was destroyed by the Scandinavian marauders in 923; Darerca continued to be widely revered especially in the northern region of Ireland (translated from  here)

Slieve Gullion ( Sliabh gCuillinn ) is a place of worship in prehistoric times on the top of which a chamber tomb was built with the sunlit entrance at the winter solstice. (see).
According to legend, the “Old Witch” lives on its top, the Cailleach Biorar (‘Old woman of the waters’) and the ‘South Cairn’ is her home also called ‘Cailleach Beara’s House‘.
the site with virtual reality
On the top of the mountain a small lake and the second smaller burial mound built in the Bronze Age. In the lake, according to local evidence, lives a kelpie or a sea monster and it’s hid the passage to the King’s Stables. (Navan, Co. Armagh)

The Hunt of Slieve Cuilinn 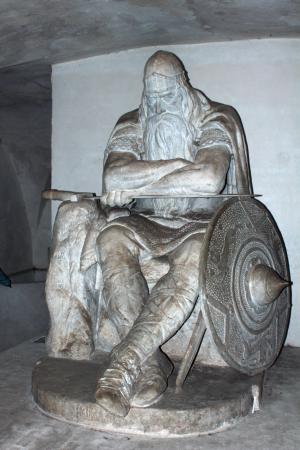 The goddess, a Great Mother of Ireland, Cailleach Biorar (Bhearra) -the Veiled is called Milucradh / Miluchradh, described as the sister of the goddess Aine in the story of “Fionn mac Cumhaill and the Old Witch“, we discover that the nickname of Fionn (Finn MacColl) “the blond”, “the white” comes from a tale of the cycle of the Fianna: everything begins with a bet between two sisters Aine (the goddess of love) and Moninne (the old goddess), Aine boasted that he would never have slept with a gray-haired man, so the first sister brought Fionn to the Slieve Gullion (in the form of a gray fawn she made Fionn pursue her in the heat of hunting by separating himself from the rest of his warriors), then turned into a beautiful girl in tears sitting by the lake to convince Fionn to dive and retrieve her ring. But the waters of the lake had been enchanted by the goddess to bring old age to those who immersed themselves (working in reverse of the sacred wells), so Fionn came out of the lake old and decrepit,and obviously with white hair. His companions, after having reached and recognized him, succeed in getting Cailleach to give him a magic potion that restores vigor to Fionn but leaves him with white hair! (see)

The Cailleach and Bride are probably the same goddess or the different manifestations of the same goddess, the old woman of the Winter and the Spring Maid in the cycle of death-rebirth-life of the ancient religion.

On the occasion of the patronal feast (pattern celebrations) of the Holy Moninna (July 6) a procession was held in Killeavy that started from St Blinne grave, headed to the sacred well along an ancient path, and then returned to the cemetery. A competition was held between teams of young people from various villages to make the most beautiful effigy of the Goddess, a faded memory of Beltane’s festivities to elect their own May Queen. During the procession the young people sang Amhrán Na Craoibhe accompanied by a dance, whose choreography was lost, each sentence is sung by the soloist to whom the choir responds. The melody is a variant of Cuacha Lán de Bhuí on the structure of an ancient carola (see)

One of the most spectacular high-level views in Ireland.
On a clear day, it’s possible to see from the peak (573 mt) as far as Lough Neagh, west of Belfast, and the Wicklow Mountains, south of Dublin.


Notes
1) it is the May doll, but also the Queen of May personification of the female principle of fertility
2) the may garland made by women
3) heads of cattle in dowry that is the animals of the village that will be smashed by the fires of Beltane
4) after the procession the feast ended with a dance
5) derogatory sentences against other garlands carried by rival teams “a pig in a poke” is a careless purchase, instead of a pig in the bag could be a cat!
6) Lough Carlingford The name is derived from the Old Norse and in irsih is “Lough Cailleach” 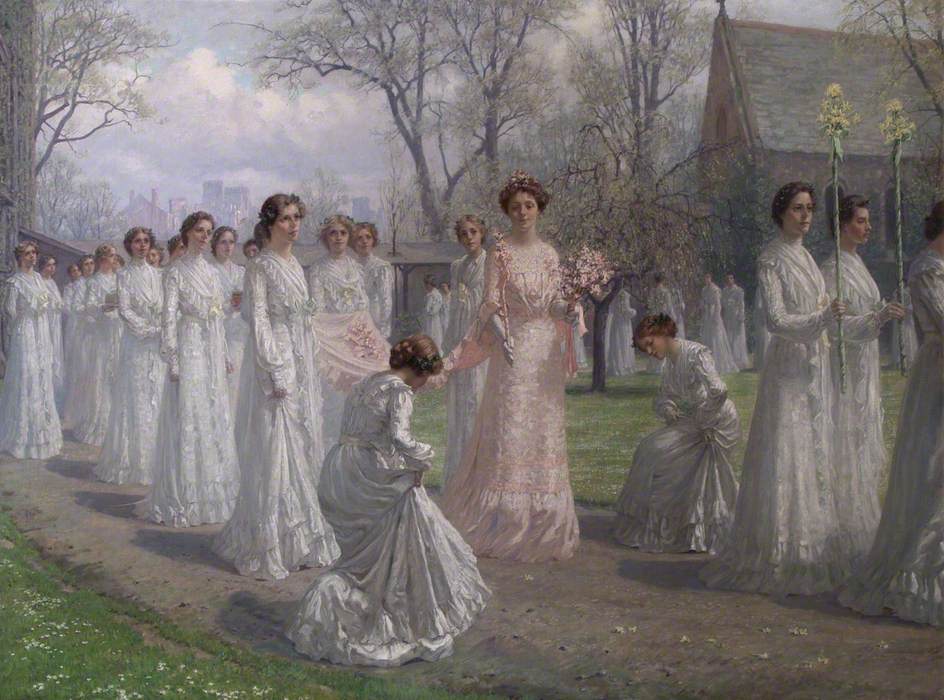 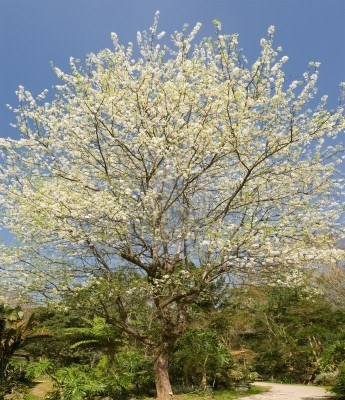 The hawthorn is the tree of Beltane, beloved to Belisama, grows as a shrub or as a tree of small size (only reaches 7 meters in height) widening the branches in all the directions, in search of the light upwards.
The branch of hawthorn and its flowers were used in the Celtic wedding rituals and in the ancient Greece and also for the ancient Romans it was the flower of marriage, a wish for happiness and prosperity.
The healing virtues of hawthorn were known since the Middle Ages: it is called the “valerian of the heart” because it acts on the blood flow improving its circulation and it is also used to counteract insomnia and states of anguish. see 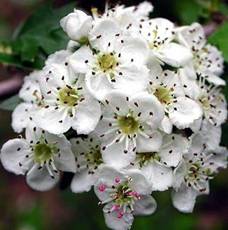 The flowers are small, white and with delicate pinkish hues, sweetly scented. In areas with late blooms for Beltane the “mayers” use the branch of blackthorn,same family as the Rosaceae but with flowering already in March-April.