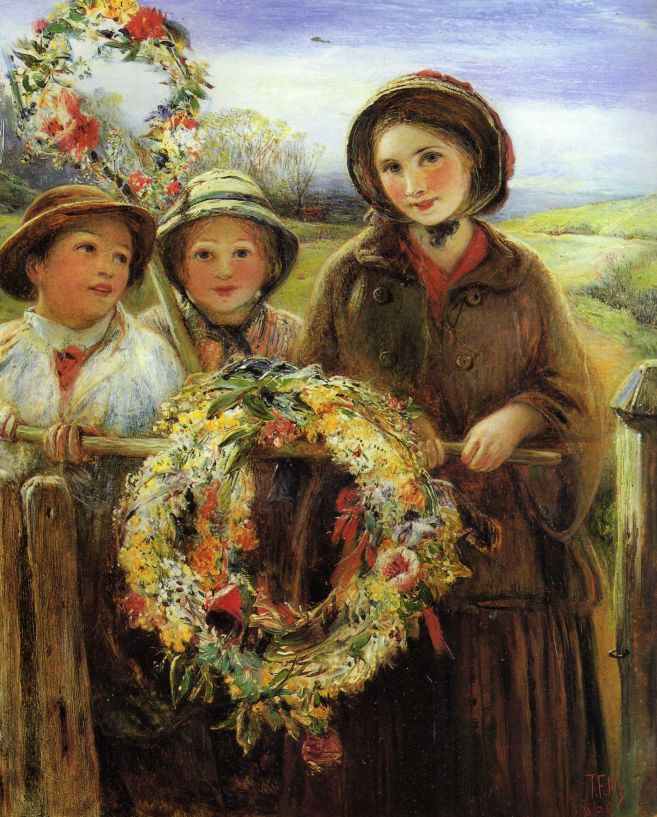 On 1st May several customs were observed. Children would go garlanding, a garland being, typically, a wooden hoop over which a white cloth was stretched. A looser piece of cloth was fastened at the top which was used to cover the finished garland. Two dolls were fastened in the middle, one large and one small. Ribbons were sewn around the front edge and the rest of the space was filled with flowers. The dolls were supposed to represent the Virgin Mary and the Christ child. The children would stop at each house and ask for money to view the garland.

Another custom, prevalent throughout the county if not the country, was maying. It was done regularly until the outbreak of the First World War and, sporadically, afterwards. Young men would go around at night with may bushes singing May carols. In the morning a may bush was attached to the school flag pole, another would decorate the inn sign at the Crown and others rested against doors, designed to fall in when they were opened. Those maying included a Lord and a Lady, the latter the smallest of the young men with a veil and bonnet. The party also included Moggers or Moggies, a man and a woman with black faces, ragged clothes and carrying besom brushes. (from here)

VIDEO Here is a very significant testimony of Margery “Mum” Johnstone from  Bedforshide collected by Pete Caslte, with two May songs

The carol is known as “The May Day Carol” or “Bedford May Carol” but also “The Kentucky May Carol” (as preserved in the May tradition in the Appalachian Mountains) and was collected in Bedfordshire.
A first version comes from  Hinwick as collected by Lucy Broadwood  (1858 – 1929) and transcribed into “English Traditional Songs and Carols” (London: Boosey & Co., 1908).

NOTES
1) the hands become those of God and no more than Our Lady, as in Cambridgshire, the contaminations with the creed of the dominant religion are inevitable
2) this sweet and fresh cream in a glass is a typically Elizabethan vintage-style drink-dessert still popular in the Victorian era, the Syllabub. The Mayers once offered “a syllabub of hot milk directly from the cow, sweet cakes and wine” (The James Frazer Gold Branch). And so I went to browse to find the historical recipe: it is a milk shake, wine (or cider or beer) sweetened and perfumed with lemon juice. The lemon juice served to curdle the milk so that it would form a cream on the surface, over time the recipe has become more solid, ie a cream with the whipped cream flavored with liqueur or sweet wine (see recipes)

3) the reference to the dew is not accidental, the tradition of May provides a bath in the dew and in the wild waters full of rain. The night is the magic of April 30 and the dew was collected by the girls and kept as a panacea able to awaken the beauty of women!! (see Beltane)

NOTES
1) the hands become those of God and no more than Our Lady..
2) Syllabub (see above)
3) the stanza derives from “The Moon Shine Bright” version published by William Sandys in Christmas Carols Ancient and Modern (1833) see

Magpie Lane from “Jack-in-the-Green” 1998 ( I, II, III e IX) with The Cuckoo’s Nest hornpipe (vedi)  ♪
The song is reproposed in the Blog “A Folk song a Week”  ♪ edited by Andy Turner himself in which Andy tells us he had learned the song from the collection of Fred Hamer “Garners Gay”
Fred collected it from “Chris Marsom and others” – Mr Marsom had by that time emigrated to Canada, but Fred met him on a visit to his native Northill, Bedfordshire. Fred’s notes say “The Day Song is much too long for inclusion here and the Night Song has the same tune. It was used by Vaughan Williams as the tune for No. 638 of the English Hymnal, but he gave it the name of “Southill” because it was sent to him by a Southill man. Chris Marsom who sang this to me had many tales to tell of the reception the Mayers had from some of the ladies who were strangers to the village and became apprehensive at the approach of a body of men to their cottage after midnight on May Eve.”

Martin Carthy & Dave Swarbrick from “Because It’s There” 1995, ♪ (track 2 May Song)
Martin Carthy writes in the sleeve notes “May Song came from a Cynthia Gooding record which I lost 16 years ago, words stuck in my head.” (from II to VIII)

NOTES
1) according to the previous religion, water received more power from the Beltane sun. Celts made pilgrimages to the sacred springs and with the spring water they sprinkled the fields to favor the rain. 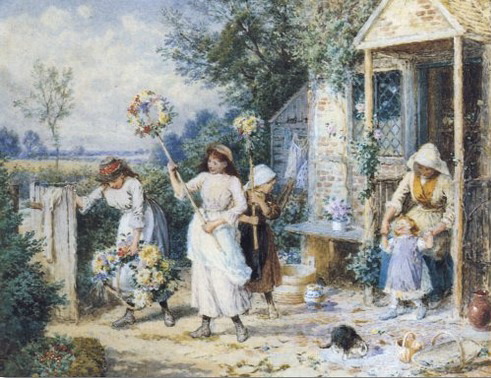