“You Seamen Bold” or “The Ship in Distress” is a sea song that tries to describe the horrors suffered on a ship adrift in the ocean and without more food on board. Probably the origin begins with a Portuguese ballad of the sixteenth century (in the golden age of the Portuguese vessels), taken from the French tradition with the title La Corte Paille. 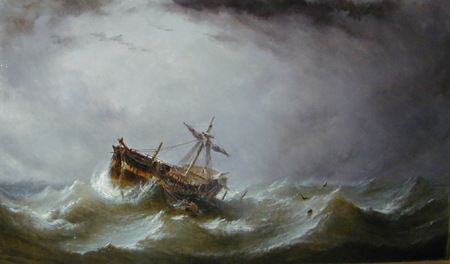 This further version was very popular in the south of England
A. L. Lloyd writes ‘The story of the ship adrift, with its crew reduced to cannibalism but rescued in the nick of time, has a fascination for makers of sea legends. Cecil Sharp, who collected more than a thousand songs from Somerset, considered The Ship in Distress to be the grandest tune he had found in that country.’ (from here)

Martin Carhty & Dave Swarbrick from But Two Came By 1968

NOTES
1) Marc say  headgear
2) extremity: bring to the extremes to be intended also in a moral sense
3 )the one who pulled the shorter straw was the “winner”, and sacrificed himself for the benefit of the survivors, this practice was called  ”the custom of the sea”: to leave the choice of the sacrificial victim to fate, it excluded the murder by necessity from being a premeditated murder
4) the juxtaposition between the two verses with the man ready for the sacrifice and sighting at dawn of the ship that will rescue them, it wants to mitigate the harsh reality of cannibalism, a horrible practice to say but that is always lurking in the moments of desperation and as an extreme resource for survival. In reality we do not know if the ship was only dreamed of by the sacrificial victim.
5) surviving sailors rarely resume the sea after the cases of cannibalism (see for example the Essex whaling story). In 1884 an English court condemned two of the three sailors of the “Mignonette” yacht who had killed Richard Parker, the 17-year-old cabin boy (the third had immunity because he agreed to testify); the death sentence was commuted at a later time in six months in prison. A curious case is that Edgar Allan Poe in 1838 in “The Narrative of Arthur Gordon Pym of Nantucket ” tells of four survivors forced into a lifeboat who decide to rely on the “law of the sea”, the cabin boy that pulled the shorter straw was called Richard Parker!