A sea song with caustic humorism also entitled “Three Sailors from Bristol City” or “Little Boy Billee”, which deals with a disturbing subject for our civilization, but always around the corner: cannibalism!
The sea is a place of pitfalls and jokes of fate, a storm can take you off course, on a boat or raft, without food and water, it’s a subject also treated in great painting (Theodore Gericault, The raft of the Medusa see): human life poised between hope and despair. 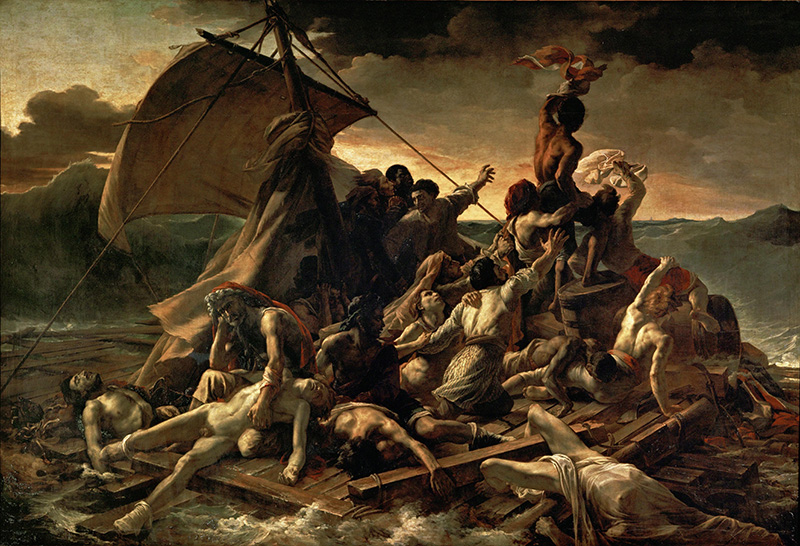 The maritime songs can express the biggest fears with a good laugh! This song was born in 1863 with the title “The three sailors” written by William Makepeace Thackeray as a parody of “La Courte Paille” (= short straw) – that later became “Le Petit Navire” (The Little Corvette) as a nursery rhyme.(see first part): cases of cannibalism at sea as an extreme resource for survival were much debated by public opinion and the courts themselves were inclined to commute death sentences in detention.
The murder by necessity (or the sacrifice of one for the good of others) finds a justification in the terrible experience of death by starvation that pushes the human mind to despair and madness, but in 1884 the case of the sinking of Mignonette broke public opinion and the same home secretary Sir William Harcourt had to say “if these men are not condemned for the murder, we are giving carte blanche to the captain of any ship to eat the cabin boy every time the food is scarce “. (translated from here).
The ruling stands as a leading case and puts life as a supreme good by not admitting murder for necessity as self-defense

From notes of “Penguin Book” (1959):
“The Portugese Ballad  A Nau Caterineta  and the French ballad  La Courte Paille  tell much the same story.  The ship has been long at sea, and food has given out.  Lots are drawn to see who shall be eaten, and the captain is left with the shortest straw.  The cabin boy offers to be sacrificed in his stead, but begs first to be allowed to keep lookout till the next day.  In the nick of time he sees land (“Je vois la tour de Babylone, Barbarie de l’autre côté”) and the men are saved.  Thackeray burlesqued this song in his  Little Billee.  It is likely that the French ballad gave rise to The Ship in Distress, which appeared on 19th. century broadsides.  George Butterworth obtained four versions in Sussex (FSJ vol.IV [issue 17] pp.320-2) and Sharp printed one from James Bishop of Priddy, Somerset (Folk Songs from Somerset, vol.III, p.64) with “in many respects the grandest air” which he had found in that county.  The text comes partly from Mr. Bishop’s version, and partly from a broadside.”  -R.V.W./A.L.L.

NOTES
Thackeray lyrics here
1) from french chemise
2) or top fore-gallant
2) his companions did not have to be very attached to the Bible (and probably Billy would have invented new ones to save time!)
4)  “Knight Commander of the Bath”, the chivalrous military order founded by George I in 1725

According to Stan Hugill “Little Billee” was a sea shanty for pump work, a boring and monotonous job that could certainly be “cheered up” by this little song! Hugill only reports the text saying that the melody is like the French “The était a Petit Navire”, so the adaptation of Hulton Clint  has the performance of a lullaby.

NOTES
1)  It’s a mispronunciation of “vittles,” which is a corrupted form of “victuals,” which means “food.”
2) a particularly lethal big knife used as a weapon
3)in some versions the degree of guilt between the two sailors is distinguished, so only one is hanged
4) 73 cannon war vessel

And for corollary here is the French version “Un Petit Navire”