The dwarves of folklore are small bearded old men with ruddy cheeks and a lumberjack appearance, in the fantasy world they are instead a small and proud race of warriors with a prodigious strength.
The world of fairy tales unites dwarfs and elves, giving the elves a more joking spirit and the dwarves a fixation for gem mines.
In the fairy tales dwarf and gnome are equivalent terms. 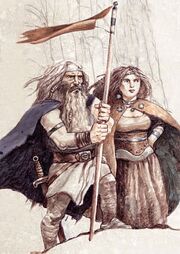 Spirits of the earth and the subsoil, the dwarves are called gnomes in 1500 by the alchemist Paracelsus (in  Liber de nymphis, sylphis, pygmaeis et salamandris et de caeteris spiritibus)which might have coined the term “gnomus” to describe these little elementary, who very much share with the dwarves of Norse mythology.
They are massive, compact and with great strength, they are the ones that set the mineral element of the earth in motion to nourish the roots of plants.
Rudolf Steiner tells us that when in autumn the plant wilts, and disperses all its physical matter in the environment, the ideal shape of the plant penetrates into the soil. The gnomes perceive the shapes of this ideal plant and keep them in themselves. When the seeds also penetrate the ground, the gnomes, during the winter, make this feminine structure of the ideal plant meet the male seeds. From this meeting, from this embrace of the feminine and the masculine under the warm, welcoming underground world, the fertilization of a new plant takes place that will sprout up to the surface in spring, to give us life, beauty, refreshment. (translated from qui)

In the Norse and Germanic mythology dvergar is the lineage of the dwarves born from the petrified flesh of the giant Ymir. The Newly borns seem like worms and the gods give them human form, consciousness and intelligence.
In the Edda in prose four dwarfs are placed to hold the firmament one for each cardinal point, the others live in Svartálfaheimr, (the world of black elves) or underground. The sagas never describe them to us and so we see them with the eyes of the Middle Ages, rough, deformed and of small stature (as well as with demonic traits).

Guardians of mines and keepers of jewelry and gold coins, jewels and precious stones are partakers of the secrets of plants and minerals, they are the guardians of primordial fire and know the art of forging metals to shape the weapons of gods, the most famous magic swords are their work. They are also the guardians of the treasures deposited in the burial mounds and more generally of the hidden treasures underground and their wisdom is proverbial ; the dwarves are experts in spells and runes.

In Brittany the dwarves are called korrigans and from this Breton tradition comes this lullaby.
Bin, Ban, Korriganan – Jean-Luc Lenoir in  “Old Celtic & Nordic Ballads”

Now after the saga released on the big screen, the whole world knows the story of the Dwarves of Durin and the Hobbits, so I dwell only on the song “I see fire” by Ed Sheeran in the credits of the film “The Desolation of Smaug” of the 2013. According to the indications of the director Sheeran tells the last moments of the film with the song.

SUCH A PARCEL OF ROGUES IN A NATION