”The Bold Grenader”, “A bold brave bonair” or “The Soldier and the Lady” but also “To Hear the Nightingale Sing”, “The Nightingale Sings” and “One Morning in May” are different titles of a same traditional song collected in England, Ireland, America and Canada.

The story belongs to some stereotypical love adventures in which a soldier (or a nobleman, sometimes a sailor) for his attractiveness and gallantry, manages to obtain the virtue of a young girl. The girls are always naive peasant women or shepherdesses who believe in the sweet words of love sighed by man, and they expect to marry him after sex, but they are inevitably abandoned.

NURSERY RHYME: WHERE ARE YOU GOING MY PRETTY MAID 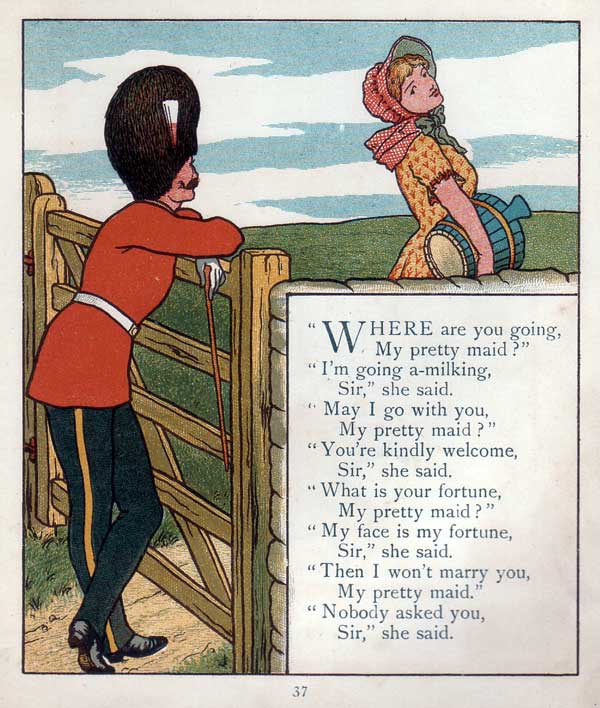 In the nursery rhyme above “Where are you going my pretty maid” this seductive situation is sweetly reproduced and the illustrator portrays the man in the role of the soldier. Walter Craine (in “A Baby’s Opera”, 1877) represents him as a dapper gentleman, but in reality he is the archetype of the predator , the wolf with the fur inside and the woman of the nursery rhyme with his blow-answer seems to be a good girl who has treasured the maternal teachings

In other versions is the girl (bad girl !!) to take the initiative and to bring the young soldier in her house (see more), only the season is always the same because it is in the spring that blood boils in the veins; as early as 1600 there was a ballad called “The Nightingale’s Song: The Soldier’s Rare Musick, and Maid’s Recreation”, so for a song that has been around for so long, we can expect a great deal of textual versions and different melodies. An accurate overview of texts and melodic variations starting from 1689 here

This is the version almost at the same time diffused by the Dubliners and the Clancy Brothers, the most popular version in the 60’s Folk clubs.

Clancy Brothers & Tommy Maker, from Live in Ireland, 1965
The Nightingale 1) soldier becomes sometimes a volunteer, but the grenadier is a soldier particularly gifted for his prestige and courage, the strongest and tallest man of the average, distinguished by a showy uniform, with the characteristic miter headgear, which in America was replaced by a bear fur hat.
2) it is the code phrase that distinguishes this style of courting songs. The nightingale is the bird that sings only at night and in the popular tradition it is the symbol of lovers and their love conventions (vedi)
3) perhaps the instrument was initially a flute but more often it was a small violin or portable violin called the kit violiner (pocket fiddle): it was the popular instrument par excellence in the Renaissance. It is curious to note how in this type of gallant encounters the soldier has been replaced by the itinerant violinist, mostly a dance teacher, so it is explained how any reference to the violin, to its bow or strings could have some sexual connotations in the folk tradition

John Jacob Niles – One Morning In May

THIRD MELODY: THE MOST ANCIENT VERSION, THE GRENADIER AND THE LADY

The melody spread in Dorsetshire, so vibrant and passionate but with a hint of melancholy, a version more suited to the Romeo and Juliet’s love night and to the nightingale chant in its version of medieval aubade, also closer to the nursery rhyme “Where are you going my pretty maid” of which takes up the call and response structure.

To savor its ancient charm, here is a series of instrumental arrangements

Isla Cameron The Bold Grenadier from “Far from The Madding Crowd”