December 13 marks the beginning of Christmas in Sweden and Norway, the day on which Saint Lucy is celebrated: a messenger of light just like its name (lux, lucis). In Italy it is said “Saint Lucy the shortest day there is” but in reality it was once, with the old Julian calendar, when the feast fell at the Winter Solstice. The confusion arose with the introduction of the Gregorian calendar which restored time, but eliminated a number of days from the old calendar.

THE SAINT OF LIGHT

Lucy was a Sicilian Christian girl lived in the last twenty years of the years of 200 BC and rather than marrying a pagan she preferred the martyrdom. In fact, a Lucy was martyred in Syracuse during the persecution of Diocletian, but no one knows how or why.

The popular fantasy has then grafted onto the pseudo-historical narrative the legend that Lucy took her eyes out, qualifying her as a protector of sight; so she is portrayed with the cup that contains her eyes.
The saint is one of the many variants of Demeter the Greek goddess who in the Eleusinian rites was connected to the myth of death and rebirth of Mother Nature (Demeter and Core or Persephone): so at the winter solstice anciently in Sicily (or Magna Graecia) Demeter, the goddess of light, was invoked to bring back the light and abundance of the crops.

St Lucy and the Donky

Before Santa became the international dispenser of gifts for children, it was Saint Lucy who flew over snow-covered fields with a crown of light over her hair, and still today in some regions of Italy (for example in western Trentino, in the Veneto, in the Bergamasco and in the Brianza) Saint Lucy is expected, who passes in the night between 12 and 13 December riding her donkey to bring gifts to the children. To send the impatient children to bed, who wanted to stay awake to see the Saint, they were frightened by saying that she would blind them with the ashes of the fireplace without leaving the gifts. So the saint performs the same functions of the Italian Befana: she rewards good children with small gifts, sweets and nougats, but also dried fruits and oranges, instead she only brings coal for the bad children.
The veneration of the Saint from the South to the North of Italy is linked to the tortuous path of her relics especially in the Middle Ages under the Republic of Venice. The body of the saint, taken in ancient times by the Byzantines in Syracuse, was subsequently stolen by the Venetians when, having left for the Crusades, they sacked Constantinople instead. Today the body is preserved and venerated in the church of San Geremia in Venice.

In the Scandinavian land also the Lutheran Church celebrates the Saint: in Sweden in her honor, the eldest daughters of the family rise before dawn, dressed in a white nightgown and crowned with branches of holly or ivy and 7 or 12 lighted candles. They bring, helped by the little ones (who represent the stars), the breakfast for the adults of the house, that is black coffee and a special sweet called in Swedish Lussekatt. In theory, sweets should be prepared the same morning, but more often they are only baked those prepared the day before are served. The children line up behind Lucy, the only one with the crown of candles, in procession (luciatåget or Lucy’s train), they sing traditional songs and the inevitable Luciasången.

The custom was born in the 1700s among the upper-middle class families of the area around Lake Vänern, and now it has become the occasion of the election of Miss Lucy, so the cities of Sweden on 12 and 13 December swarm with beautiful girls, in white dressing gowns with a red belt at the waist, who singing the song of Saint Lucy and waving in supermarkets and churches, offering smiles and cookies. So even if the day is not considered a holiday it is as if it were because in schools and offices everything is a luciatåget, traditional choirs and sweets.

Over time so many meanings linked to the solstitial day have been stratified, so the day has remained essentially a feast of light: large bonfires, parades with torches and many ceremonies full of lit candles to symbolize the victory of light over darkness; Lucy is the guardian of the shortest day of the year (and therefore she is blind) but at the same time she is the witnesses the passage of darkness to light, because after the solstice the hours of light gradually begin to increase, thus lengthening the duration of the day !

The song of Saint Lucy (Luciasången), that the Swedes sing with so much fervor, is none other than the very Italian “Santa Lucia” or the Neapolitan song written by Teodoro Cottrau (Neapolitan of French origins if we really want to quibble); the original song has nothing to do with the Saint, but with a popular neighborhood of Naples, watched by the boatman who enjoys the beautiful view from the Gulf of Naples and is moved to see his “Santa Lucia“.

On the song, however, a dispute arose, other sources report that the text was written by Baron Michele Zezza and published by Cottrau as publisher and composer for the musical part, subsequently translated into Italian by Cottrau himself to celebrate the unity of Italy. However, the version that made the song famous worldwide was that of the poet and journalist Enrico Cossovich (1822-1911)

Elvis Presley from “Elvis for Everyone” 1965

The text of the Swedish Saint Lucy is obviously different from the Neapolitan barcarola, all focused on the solstice day: it is the invocation of a heavenly goddess of light so that it descends to earth to make it reborn.

The Scandinavian tradition seems to have begun in 1764, when a priest in Vestergotland said he was awakened, in the middle of the night, by a mysterious song. Upon awakening he saw two young girls dressed in white, one with a silver candelabra lit and the tall woman who was preparing breakfast on the table. Gradually the procession of children from the first homes of the aristocratic families of Skane spread throughout Sweden in churches, schools, hospitals, senior centers and in various workplaces where Lucy and her bridesmaids bring gifts and sing songs .
At the windows there are candle which, with the heat of the flame, make the paper music boxes rotate higher up. Another very common decoration is the crown of wheat decorated with red berries and lighted candles (so as not to forget the bond with Demetra). 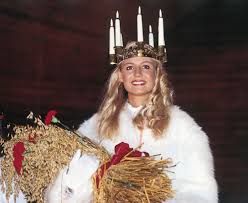 The tradition had become so popular that in 1927 a Stockholm newspaper had the idea of ​​inaugurating the first competition among readers to vote for the most beautiful Lucy. Since then, every year a Lucy is elected in each city and the “Lucy” of the Year is crowned in Stockholm by a Nobel Prize for literature. Not only that, the Lucy who wins the Miss contest flies to Syracuse to participate in the Sicilian celebrations.

But the celebration of St. Lucia in the Scandinavian countries has deep roots: in addition to the memory of the saint, they celebrate the light that decreases until the next winter solstice; the flames of the crown candles on Lucia’s head are the light that dies and then returns; the white tunics are the symbol of virginity as the sacred vestals guardians of the fire; the processions are a ritual omen of the nativity and of the expectation for the nascent life, in the new seasonal cycle. So 12 are the days that separate Saint Lucy from Christmas as twelve are the days of Christmas until the feast of the Epiphany. 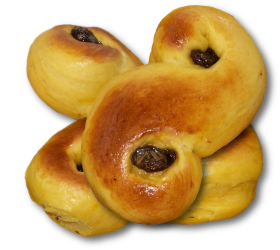 The Lussekatters (Saint Lucy cats) are saffron brioches with the characteristic “S” shape. They are very yellow but not very sweet. It seems that the origin of the recipe is German, dating back at least to the Renaissance: the original shape of the sandwiches was the swastika, a well-known solar archetypal symbol, but after the disastrous associations of the symbol with the Nazis even the scones changed shape, they are become half-crosses with the ends rolled in a spiral and with a raisin in the middle of the two ends (perhaps representing the eyes torn from the saint). 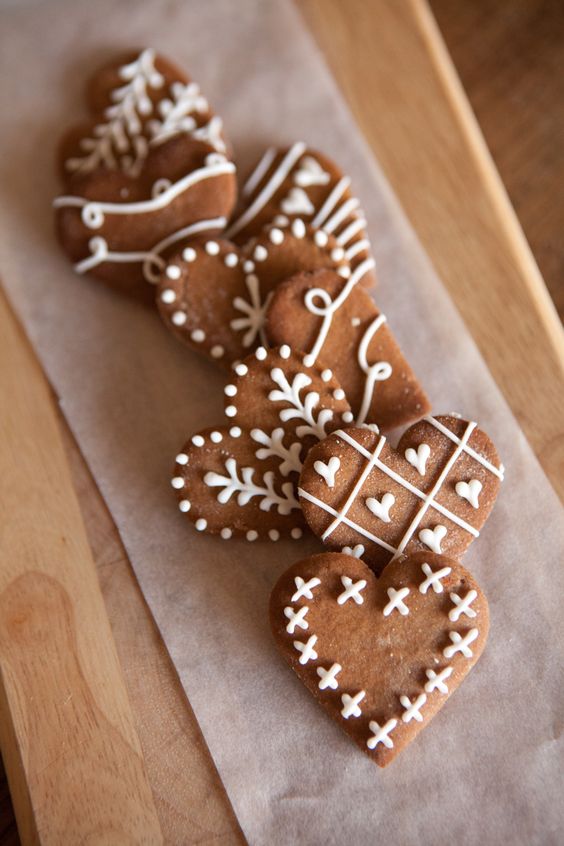 Obviously the confectionery specialties do not end there, there are also the Lucy-pepparkakor, gingerbread cookies decorated with sugar icing: they are spicy biscuits with cinnamon, cloves, nutmeg, cardamom and ginger with a strong taste. a little bitter. They are more generally called ginger snaps or gingerbreads. In general, the dough is rolled thin to give more crunchiness to the biscuit and cropped into the classic heart and star shapes but also of the little man, reindeer, moose, horse, fir and squirrel.