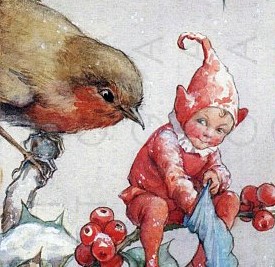 Jack Frost is the symbolic counterpart of Jack of the Green, he is the ice elf, who is responsible for the arrival of the frost: at the beginning of the Anglo-American tradition Jack is a vigorous old man, but soon he becomes more like one fairytale spirit, assistant to Mastro Gelo.

It was with the nursery rhyme entitled “Little Jack Frost” by Charles Sangster (1875) that Jack became a prankster elf, the one who brings the magic of winter, its rigor but also its beauty of ice, and spreads his magic silver-colored powder on the leaves, among the branches of the trees and on the windows of the houses!

I
Little Jack Frost went up the hill.
Watching the stars so cold and chill,
Watching the stars and the moon so bright.
And laughing aloud like a crazy wight.
II
Little Jack Frost ran down the hill,
Late in the night, when the winds were still,
Late in the fall, when the leaves fell down,
Red, and yellow, and faded brown.
III
Little Jack Frost walked through the trees,
“Ah,” sighed the flowers,”we freeze, we freeze!”
“Ah,” sighed the grasses,”we die, we die”
Said little Jack Frost, “Good-bye, good-bye!”
IV
Little Jack Frost tripped round and round.
Spreading white snow on the frozen ground ;
Nipping the breezes, icing the streams,
And chilling the warmth
of the sun’s bright beams.
V
Nobody saw him, still he was there.
Nose-biting, prank-playing, everywhere;
All through the houses, out in the street,
Capering wildly through storm and sleet.
VI
But when Dame Nature brought back the spring,
Brought back the birds to chirp and sing.
Melted the snow and warmed the sky.
Little Jack Frost went pouting by.
VII
The flowers opened their eyes of blue.
Green buds peeped out and grasses grew.
And it got so warm and scorched him so.
Little Jack Frost was glad to go.

Jack Frost by Hannah F. Gould (1830 c.)
The Frost looked forth one still, clear night,
And whispered, “Now I shall be out of sight;
So, through the valley, and over the height,
In silence I’ll take my way.
I will not go on like that blustering train,
The wind and the snow, the hail and the rain,
That make such a bustle and noise in vain,
But I’ll be as busy as they!”
So he flew to the mountain,
and powdered its crest;
He lit on the trees, and their boughs he drest
With diamonds and pearls; and over the breast
Of the quivering lake he spread
A coat of mail, that it need not fear
The downward point of many a spear
That he hung on its margin, far and near,
Where a rock could rear its head.
He went to the windows of those who slept,
And over each pane, like a fairy, crept;
Wherever he breathed, wherever he stepped,
By the light of the morn were seen
Most beautiful things;
there were flowers and trees;
There were bevies of birds and swarms of bees;
There were cities with temples and towers;
and these All pictured in silvery sheen!
But he did one thing that was hardly fair-
He peeped in the cupboard, and finding there
That all had forgotten for him to prepare-
“Now, just to set them a-thinking,
I’ll bite this basket of fruit,” said he,
“This costly pitcher I’ll burst in three;
And the glass of water they’ve left for me
Shall ‘tchick’ to tell them I’m drinking!”

Jack Frost And The Hooded Crow

I
Through long December nights
we talk in words of rain or snow
While you, through chattering teeth,
reply and curse us as you go.
Why not spare a thought this day
for those who have no flame
To warm their bones at Christmas time?
Say Jack Frost and the Hooded Crow.
II
Now as the last broad oak leaf falls,
we beg: consider this,
There’s some who have no coin to save
for turkey, wine or gifts.
No children’s laughter round the fire,
no family left to know.
So lend a warm and a helping hand
Say Jack Frost and the Hooded Crow.
III
As holly pricks and ivy clings,
Your fate is none too clear.
The Lord may find you wanting,
let your good fortune disappear.
All homely comforts blown away
and all that’s left to show
Is to share your joy at Christmas time
With Jack Frost and the Hooded Crow.

I
Here is a tale of the trees in a wood
They were never that pleased on the land that they stood.
So they upped and they walked off as far as they could
‘Til they felt the sun shine on their branches.
CHORUS
I was little boy lost,
and I was little boy blue
I am little Jack Frost
but I am warm through and through
It’s not easy to hide
when your heart’s on full view
Oh, tonight, cruel world be forgiving
Oh, for once in my life I am living.
II
There they did stand and there they did stay
When there came a young boy
who was running away
From a mad world, a bad world,
a world of decay
And it’s comfort he sought in their branches
III
There we found love
and there we found joy
And the warmth in his heart oh,
it filled the young boy
And his friends taught him
magic and secrets of old
While the trees kept him safe
with their branches.