A Scottish humorous song, “Maids When You’re Young Never Wed An Old Man” discourages young women in marrying men who are too old, and its song, between irony and bitterness, is a warning to all.
The great difference in age between the two spouses was still a custom until the mid-1900s: older men married to twenties girls, who played the role of ante litteram carers! 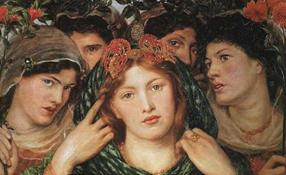 as “faloorum” and “ding doorum”: at first the young woman is courted by the older man and agrees to marry him, but when it’s time for going to bed she discovers that unfortunately her old man is impotent. So as soon as the old man falls asleep the girl, she throws herself into the arms of a young and manly lover.

Nowaday this song makes us smile but in the nineteenth century it was considered rather spicy: the simple allusion to sex was vulgar but the reference to impotence and adultery had to be outrageous! Despite everything, it became a popular song in Scotland, England, Ireland and America. The first publication dates back to 1869 in “Ancient Scottish Songs, Heroic Ballads” by David Herd under the title “Scant of Love, Want of Love”.

Mairi  Morrison & Alasdair Roberts in Urstan, 2012 (verses 1-2-4-3) for a more sober version. The CD was commissioned by Scotland’s Center for Contemporary Arts as a tribute to Gaelic music and culture. An artistic collaboration increasing freshness and creativity.