The songs of the sea run from shore to shore, in particular “Windy old weather”, which according to Stan Hugill is a song by Scottish fishermen entitled “The Fish of the Sea”, also popular on the North-East coasts of the USA and Canada.
TITLES: Fishes Lamentation, Fish in the Sea, Haisboro Light Song (Up Jumped the Herring), The Boston Come-All-Ye, Blow Ye Winds Westerly, Windy old weather

A forebitter sung occasionally as a sea shanty, redating back to 1700 and probably coming from some broadsides with the title “The Fishes’ Lamentation“. “This song appears on some broadsides as The Fishes’ Lamentation and seems to have survived as a sailor’s chantey or fisherman’s song. Whall (1910), Colcord (1938) and Hugill (1964) include it in their chantey books. We also recorded it from Bob Roberts on board his Thames barge, The Cambria. It also appears in the Newfoundland and Nova Scotia collections of Ken Peacock and Helen Creighton“. (from here)

A fishing ship is practicing trawling on a full moon night, and as if by magic, the fishes start talking and warning sailors about the arrival of a storm. The fishes described are all belonging to the Atlantic Ocean and are quite commonly found in the English Channel and the North Sea (as well as in the Mediterranean Sea).
The variants can be grouped into two versions 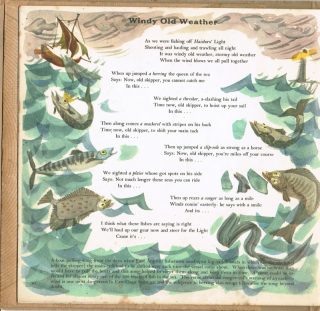 In this version the fish warn (or threaten) the fishermen on the arrival of the storm, urging them to head to the ground. The text is reported in “Oxford Book of Sea Songs”, Roy Palmer

NOTES
1) Happisburgh lighthouse (“Hazeboro”) is located in the English county of ​​Norfolk, it was built in 1790 and painted in white and red stripes; It is managed by a foundation that deals with the maintenance of more than one hundred lighthouses throughout Great Britain. 112 are the steps to reach the tower that still works without the help of man. The headlights at the beginning were two but the lower one was dismantled in 1883 due to coastal erosion. The two lighthouses marked a safe passage through the Haagborough Sands
2) In the Nordic countries herrings (fresh or better in brine or smoked) are served in all sauces from breakfast to dinner. “It is a fish that loves cold seas and lives in numerous herds.The herring fishing in the North Seas has been widespread since the Middle Ages.It is clearly facilitated by the quantity of fish and the limited range of their movements. trawlers and start the fishing season on May 1, to close it after two months.In all the countries of North America and Northern Europe this fishing has an almost sacred character, because it has been for years the providence of fishermen and is a real natural wealth In the Netherlands and Sweden, for example, the first day of herring fishing is organized in honor of the queen and is proclaimed a national holiday ” (from here)
3) Thresher shark thresher, thrasher, fox shark, alopius vulpinus.with a characteristic tail with a very elongated upper part (almost as much as the length of the body) that the animal uses as a whip to stun and overwhelm its prey. The name comes from Aristotle who considered this fish very clever, because he was skilled in escaping from the fishermen
4) the mackerel stanza is missing:
then along comes a mackerel with strips on his back
“Time now, old skipper, to shift yout main tack”
5) perhaps refers to halibut or halibut, of considerable size, has an oval and flattened body, similar to that of a large sole, with the eyes on the right side
6) the “conger” is a fish with an elongated body similar to eel but more robust, can reach a length of two or three meters and exceeds ten kilos of weight. It is a fundamental ingredient in the Livorno cacciucco dish!
7) another translation of the sentence could be: we recover our networks

In this version the fish take possession of the ship, it seems the description of the ghost ship of “Davy Jone”, the evil spirit of the waters made so vividly in the movie “Pirates of the Caribbean”. An old Scottish melody accompanies a series of variations of the same song. 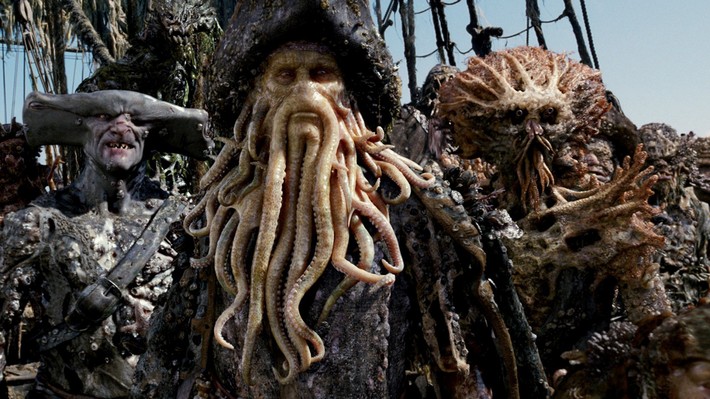 Michiel Schrey, Sean Dagher, Nils Brown from, Assasin’s Creed – Black Flag  titled “Fish in the sea” (stanzas from I to III and VIII)

NOTES
1) literally “stupid head” is a common saying among the fishermen that the cod is stupid, because it does not recognize the bait and lets himself hoist docilely on board.
2) the fishermen were / are very superstitious men, in all latitudes, it takes little or nothing to attract misfortune in the sea, it is still a widespread belief that the devil or the evil spirit has power over the sea and storms.

Of the second version, the best-known in America bears the title “The Boston as-all-ye” as collected by Joanna Colcord in her “Songs of American Sailormen” which she writes”There can be little doubt that [this] song, although it was sung throughout the merchant service, began life with the fishing fleet. We have the testimony of Kipling in Captains Courageous that it was a favourite within recent years of the Banks fishermen. It is known as The Fishes and also by its more American title of The Boston Come-All-Ye. The chorus finds its origin in a Scottish fishing song Blaw the Wind Southerly. A curious fact is that Captain Whall, a Scotchman himself, prints this song with an entirely different tune, and one that has no connection with the air of the Tyneside keelmen to which our own Gloucester fishermen sing it. The version given here was sung by Captain Frank Seeley.”

Peggy Seeger from  Whaler Out of New Bedford, 1962

NOTES
1) In sailing, tack is a corner of a sail on the lower leading edge. Separately, tack describes which side of a sailing vessel the wind is coming from while under way—port or starboard. Tacking is the maneuver of turning between starboard and port tack by bringing the bow (the forward part of the boat) through the wind. (from Wiki)
2) porpoise is often considered as a small dolphin, has a distinctive rounded snout and has no beak like dolphins
3) it  is the helmsman shouting
4 ) smelt it (osmero) is a small fish that lives in the Channel and in the North Sea; its name derives from the fact that its flesh gives off an unpleasant odor
5) literally “stupid head” is a common saying among the fishermen that the cod is stupid, because it does not recognize the bait and lets himself hoist docilely on board.