A folk ballad that inaugurates a narrative genre collected in multiple variations called “The will of the poisoned man“: the story of a dying son, because he has been poisoned, who returns to his mother to die in his bed and make a will; in all likelihood the ballad starts from Italy, passes through Germany to get to Sweden and then spread to the British Isles (Lord Randal) until it lands in America.
This is how Riccardo Venturi teaches us “This ballad may have originated very far from the moors and lochs, and very close to our home [Italy].The poison, in fact, is a very strange weapon in the fierce ballads of Britain, where they kill themselves with sword, it is a subtle, ‘feminine’ means of killing, and it is not by chance that it has always been considered, on a popular level, a really Italian thing. “ 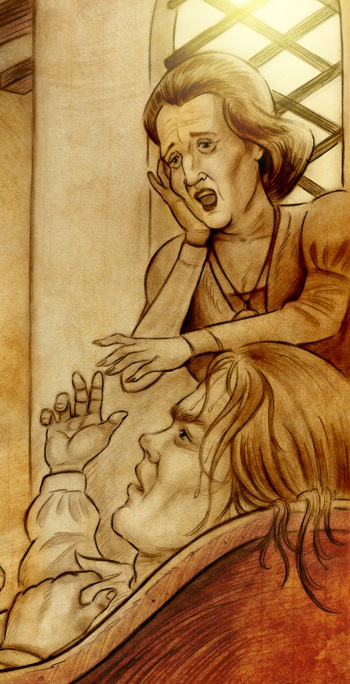 “The poisoned man”, or “The will of the poisoned man“, is an Italian ballad attested for the first time in a repertoire of popular songs published in 1629 in Verona by a Florentine, Camillo the Bianchino. It was then also reproduced by Alessandro d’Ancona in his essay “La poesia popolare italiana’: the author expresses the opinion that the original text was Tuscan and contains some versions from the Como area and Lucca. Translated in Folk-ballads of Southern Europe edited by Sophie Jewett, Katharine Lee Bates, 1913. (see)
To date there are almost 200 regional versions of this ballad, based on the dialogue between mother (or sometimes the wife) and son who in some regions is called Henry, in other Peppino in others, as in Canton Ticino, Guerino: other characters are the doctor, the confessor and the notary, only in the final we learn that his wife is the guilty (in some versions the sister or more rarely the mother)

The poisoning occurs by means of an eel. The eel was a very popular food in the Middle Ages, and consumed even in areas far from the sea, as it could be kept alive for a long time. But the eel has a serpentine aspect and in fact the capitone (ie the eel with the big head) is often compared, at least in Italy, to the male penis.
At first glance the poisoning could be a revenge by the wife or lover due to a betrayal and it comes a spontaneously parallel with another red thread traced for Europe( ” the Concealed Death“) indeed these ballads could originate from the same ancient mythological source: the hero goes hunting in the woods and is poisoned by a mysterious lady, then returns home and makes his will.
According to the psychoanalytic interpretation of Giordano Dall’Armellina in archetypal key, here we see the teaching-rite of passage that was given in ancient times through the telling. (see the italian text)

The melodies are very varied and range from lament to dance tunes.

Il canzoniere del Piemonte (in english: The songbook of Piedmont) voice Donata Pinti
In this version the dialogue is between wife and husband; they call the notary to make a will.

NOTE
1) in italian cascina is a typical agricultural structure of the Po Valley: the lands and houses of the landlord belong to the male brothers
2)the dowry

Musicanta Maggio (Emilia area) in which also a dog dies poisoned for eating a piece of eel. 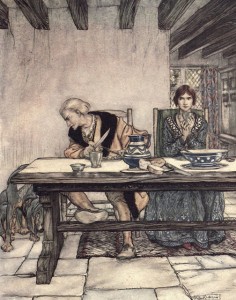