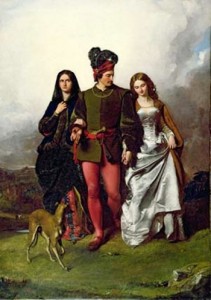 One of the most popular ballads in the Anglo-American Balladry (second only to Barbara Allen) is collected by professor Child at number 73, with the title “Lord Thomas and Annet“.
Some scholars believe that the story (a kind of gothic fable) narrates the same love triangle of “William and Margaret” (Child #74) with the protagonist who instead of committing suicide prefers to go to church to kill her rival. As a Shakespeare’s tragedy, the murdered victims immediately become three. Depending on the version it is the blonde to kill the brown, or vice versa, but it is still the brown bride to be killed by her husband!

A Lord recommended by his family marries a rich landowner, although his heart beats for another woman. On the wedding day the rival also comes to church and insults the bride who, in a fit of mad jealousy, kills her and is herself killed by the Lord (who commits suicide soon after).
While today the story would have developed in twelve episodes of a TV series with revenges and counter-revenges (just to name one, Revenge) in the Middle Ages with forty stanzas they entertained the public on an evening at the castle.
The oldest versions are found in Scotland (or perhaps in England), but the origin of the ballad is certainly even more Nordic and the signal in this sense comes from the physical connotation of the bride: a woman with black hair. In a light-haired population such as the Norse, the foreign element that carries negativity is the dark, the principle of all evil. The ballad then spread to the British Isles and America following the Scottish and Irish migrations.

A variant of the story sees two twin sisters separated from birth struggling with a man who subdues the blonde one, taking her as a concubine, and marries the other for her rich dowry. Anna kidnapped by a knight becomes her lover and generates various children. At the time of celebrating the wedding, however, the Lord prefers to turn to a woman of noble birth (and with a rich dowry) and relegates Anna to the rank of servant. The two women, however, on the same night of the wedding discover that they are sisters, the marriage is canceled and she returns home leaving the dowry to the lost sister. Some scholars even believe that this is the most ancient medieval matrix of the whole narrative vein thus highlighted, a matter of Brittany brought back in vogue by Mary of France as the Lai de Fresne. ( Child #62)

Finally, again on the subject of sisters, the very popular Cruel Sister, in which, out of jealousy, the brown sister drowns the blonde one and she is accused by a magical harp of her misdeed. (see)

A classic of fairy tales it is the connotation of the color of the hair to distinguish the good sister from the bad sister, an atavistic code derived from the fact that the dark hair was that of the foreigner, or the enemy. The distinction did not concern the color of the skin, even if the milk-white complexion was considered sexier (a matter of taste, once the cadaveric pallor smelled of wealth like in our times the Caribbean tan).
Probably the color could be considered in ancient times as a racial connotation, but in the Middle Ages it was more certainly a social connotation.
In this ballad, however, the blonde is the poor Annie or Eleonor (Ellender), while the brown one is the rich rival. So a further typically medieval reading is the one that contrasts the nobility of blood (but impoverished) against bankers and merchants, that is the new emerging class that wants to marry into the nobility to wear the coat of arms. All the positive features therefore fall on the blonde, while the brown girl does not even have a name that identifies her!

Anna or Ellender, the fair sister 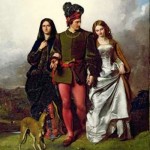