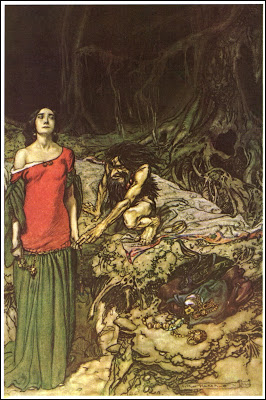 Love Chase is a typical theme of popular songs, according to the proper ways of the courting song it is the contrast between two lovers, in whice he tries to conquer her and she rejects him or banters in a comic or coarse situation
So the ballad “The Twa Magicians” is a Love Hunt in which the natural prudery of the maid teases the man, because her denial is an invitation to conquer.

The ballad originates from the north of Scotland and the first written source is in Peter Buchan’s “Ancient Ballads and Song of the North of Scotland” – 1828, later also in Child # 44 (The English and Scottish Popular Ballads by Francis James Child ). It is believed to come from the Norse tradition. The versions are numerous, as generally happens for popular ballads spread in the oral tradition, and even with different endings. In its “basic” form it is the story of a blacksmith who intends to conquer a virgin; but the girl flees, turning into various animals and even objects or elements of Nature; the man pursues her by changing form himself.
There is a written trace of the theme already in 1630 in a ballad entitled “The two kind and Lovers” – in which however the woman is to chase the man.
The ballad begins with the woman who says

if thou wilt goe, Love,
let me goe with thee
Because I cannot live,
without thy company
Be thou the Sunne,
Ile be the beames so bright,
Be thou the Moone.
Ile be the lightest night:
Be thou Aurora,
the usher of the day,
I will be the pearly dew,
upon the flowers gay.
Be thou the Rose,
thy smell I will assume,
And yeeld a sweet
odoriferous perfume

It is therefore a matter of complementary and non-opposing couples, a sort of total surrender to love on the part of the woman who declares her fidelity to man. Let us not forget that ancient ballads were also a form of moral teaching.
And yet we find buried in the text traces of initiation rituals, pearls of wisdom or druidic teachings, so the two wizards are transformed into animals associated with the three kingdoms, Nem (sky), Talam (Earth) Muir (sea) or world above, middle and below and the mystery is that of spiritual rebirth.
Other similarities are found with the ballad “Hares on the Mountain”

In general, the Love Chase ends with the consensual coupling.
Today’s version of “The Two Magicians” is based on the rewriting of the text and the musical arrangement of Albert Lancaster Lloyd (1908-1982) for the album “The Bird in the Bush” (1966);

(all the verses except XV and XVI)

Damh the Bard from Tales from the Crow Man, 2009. Another minstrel of the magical world in a more rock version (verses from I to VII, XI, IX, XII, X, XIV, XV, XVI,XVII, XVIII)

Jean-Luc Lenoir from “Old Celtic & Nordic Ballads” 2013 (voice Joanne McIver) ♪
– a lively and captivating arrangement taken from a traditional (it’s a mixer between the two melodies)
Owl Service from Wake The Vaulted Echo (2006)
Empty Hats from The Hat Came Back, 2000 the choice of speech is very effective

NOTES
1) in popular songs the blacksmith is considered a synonym of virility, a very gifted lover with a portentose force. Here he is also a magician armed with a hammer while the girl is a antagonist (or complementary) holds a willow wand.
One thinks of a sort of duel or challenge between two practicing wizards
2) in ancient ballads some words are codes that make the alarm bells ring out in the listener: red is the color of fairies or creatures with Magic powers. Red was also the color of the bride in antiquity and is a favorable color for fertility
3) also written as “pot of gold” and immediately it come to mind the leprechaun
4) the hare-hound couple is the first of the transformations in the Welsh myth of Taliesin’s birth. Gwion is the pursued that turns into a lunar animal, takes in itself the female principle symbol of abundance-fertility, but also creativity-intuition, becomes pure instinct, frenzy.
The dog is not only predator, but also guardian and psychopomp ‘The dog plays with many populations the function of guardian of the sacred places, guide of the man on the night of death, defender of the kingdom of the dead, overseer in all cases of the kingdom spiritual.
In particular among the Celts it was associated with the world of the Warriors. In fact, the dog was present in the Warrior initiations. Hunting, like war, was a sacred act that could be accomplished only after an initiation and a ritual preparation of divine protection. (Riccardo Taraglio from Il Vischio e la Quercia) see more
5) scottish pancake: a special tool to cook the Beltane bannock.The two iron griddle could be smooth or variously decorated honeycomb or floral carvings, written or geometric designs, were hinged on one side and equipped with a long handle: placed on the fire it was turned over for cooking on the other side. In the Middle Ages they had become masterpieces of forging made by master wares or refined silversmiths, and they were a traditional engagement gift. see more

The song is reported by Cecil Sharp in One Hundred English Folksongs (1916) in the notes he says he heard it from Mr. Sparks (a blacksmith), Minehead, Somerset, in 1904.

Steeleye Span from “Now we are six”, 1974 – a funny video animation

NOTES
1) water dog is a large swimmer retriever dog or a dog trained for swamp hunting,
2) the bumblebee is related to the bees, but does not produce honey and is much larger and stocky than the bee
3) “Which part of the word NO do not you understand?” that is, the categorical and virginal refusal of the woman to the sexual act repeatedly attempted by an ugly, dark and even stinking blacksmith. In escaping the man’ s longing she turns into duck, star, rose, nun and trout (and he in marsh dog, cloud, bumblebee, priest, fishing hook); apparently the girl prefers her death rather than undergoing a rape: this is a distorted way of interpreting the story, it is the “macho” mentality convinced that woman is not a victim but always in complicit with the violence and therefore to be condemned.
In my opinion, instead, it is the return to the earth with the fusion of the feminine principle with the male one; the two, now lost in the vortex of transformations, merge into a single embrace of dust and their death is a death-rebirth.

The hunter man here is a “supernatural” figure, the blacksmith was considered in ancient times a creature endowed with magical powers, the first blacksmiths were in fact the dwarves (the black or dark elves) able to create weapons and enchanted jewels. The art of forge was an ancient knowledge that was handed down among initiates.
So in the Middle Ages the figure of the blacksmith took on negative connotations, just think of the many “forges of the devil” or “the pagan” that gave the name to a place once a forge.

By virtue of his craft, the smith is a mighty man with well-developed muscles, yet precisely because of his knowledge and power the smith is often lame or deformed: if he is a mortal his impairment is a sign that he has seen some divine secret, that is, it has seen a hidden aspect of the divinity thus it is punished forever; it is the knowledge of the secret of fire and of metals, which turn from solid to liquid and blend into alloys. In many mythologies the same gods are blacksmiths (Varuna, Odin), they are wizards and they have paid a price for their magic.
The lameness also hides another metaphor: that of the overcame test that underlies the research, be it a spiritual conquest or a healing or revenge act (a fundamental theme in the Grail cycle).

But the magicians of the ballad are two so the girl is also a shapeshifter or perhaps a shaman. 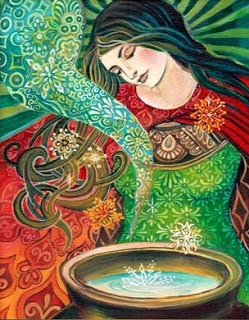 The theme of transformation is in Ovid’s Metamorphoses: a succession of Olympian gods who, through their lust, transform themselves into animals (but also in golden rain) and seduce beautiful mortals or nymphs.
The pursuit through the mutation of the forms recalls the chase between Cerridwen and his apprentice in the Welsh history of the the bard Taliesin birth (534-599) . A boy is escaping, having drunk the magic potion from the cauldron he was watching over; he escapes the wrath of the goddess by becoming various animals (hare, fish, bird). At the end he is a wheat grain to hide like a classic needle in a haystack, but the goddess changed into a hen eating it. From this unusual coupling is born Taliesin alias Merlin

THE SONG OF AMERGIN *
I am a stag: of seven tines,
I am a flood: across a plain,
I am a wind: on a deep lake,
I am a tear: the Sun lets fall,
I am a hawk: above the cliff,
I am a thorn: beneath the nail,
I am a wonder: among flowers,
I am a wizard: who but I
Sets the cool head aflame with smoke?

That is, in order to become Wisdom, to Understand, one must experience the elements …
This poem by Taliesin could condense the mystery of the initiatory journey, in which Wisdom is conquered with the knowledge of the elements, which is profound experience, identification, through the penetration of their own essence, becoming the same traveler the essence of the elements.
Changing shape means experiencing everything, experiencing oneself in everything in continuous change and experiencing the encounter between the self and the other, prey and predator, not separated but inseparably linked, as in a dance. ( from here)

The main characteristic of the shaman is to “travel” in conditions of ecstasy in the spirit world. The techniques for doing this are essentially the ecstatic sleep (mystical trance) and the transformation of one’s spirit into an animal. As a magical practice it involves a transformation of a part of the soul into the spirit of an animal to leave the body and travel in both the sensitive and the supersensible world. Another technique is to leave your body and take possession of the body of a living animal. In this way the shaman “rides”, that is, takes as a means to move, the bodies of animals that are also his driving spirits. In some rituals, psychoactive plants are used, or the drum beat, or the skins or the mask of the animal that you want to “ride” are worn. This practice is not free from risks: it may happen that the shaman can no longer return to his body because he forgets himself, his human being, or travels too far from the body and falls into a coma or the physical body dies because too weakened by separation.
The spirit can be captured in the afterlife or the animal can be wounded or killed on the ground level and therefore, as the soul of the shaman is captured or wounded or killed, so does his body report its consequences. 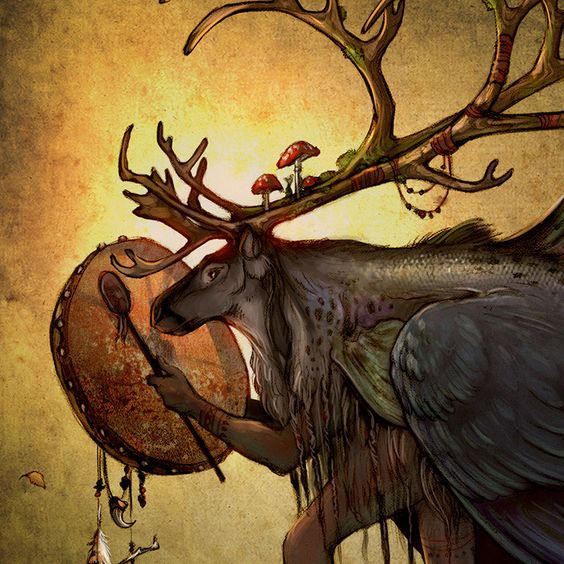