In the Middle Ages to exorcise the fear of death, they danced with her, the living and the keletons are depicted all in a row in an endless farandola to leave life at dance step.
The most widespread theme in the early Middle Ages, however, was the Universal Judgment, a Memento Mori (As I am, you will be) that passed to the theme of the “Triumph of Death” as Danse Macabre. In the Danse Macabre all the social categories of the time are represented, starting with the powerful and the rich bourgeois and then gradually the artisans, the peasants and the poor.
With death crowned to direct the great ball and its attendants to throw the darts (or to shoot with the rifle as in the fresco of Clusone) or to play some musical instruments. Perhaps a sort of social satire, but it was rather a reflection on vanitas (of power and wealth) 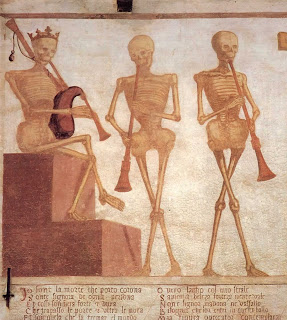 Angelo Branduardi  “Ballo in fa diesis minore” from “La pulce d’acqua” 1997: if the text follows the motif of the medieval macabre dance, the music is instead a medieval tune reported by Giorgio Mainerio in his “Il primo libro dei balli accomodati per cantar et sonar d’ogni sorte de instromenti ” (1578) and it was more properly a “rain dance” here
Guest of the album, the Sardinian musician Luigi Lai, virtuoso of the “launeddas“, very ancient wind instrument (here).

THE SHAKING OF THE SHEETS

“Shaking of the Sheets” was published in 1568 in “Popular Music of the Old Time” (Chappell) (cf). In the English Dancing Master, Playford transcribed the melody, let’s hear it performed by the Baltimore Consort

The song, however, re-proposed in a folk-rock key by the Steeleye Span follows some sixteenth-century stanzas but the music was composed by Robert “Bob” Johnson and mixed with a country dance titled Black Joke (Joack) from the village of Adderbury in Oxfordshire. Black Joak was transcribed by Cecil Sharp from the bearer John Mason of Stow-on-the-Wold, a traditional melody of the Morris Dance with the sticks of the same name.

The spread of so many depictions of macabre dances on the walls of all Europe is traced back to the passage of the great plague of 1348 which decimated the populations without knowing boundaries. Never before had Europe known such a pestilence, though devastated by war and famine: entire villages disappeared and the fields filled with weeds because there was no one left to cultivate them. The chroniclers of the time wrote “A third of the world died”.
On the other hand, a “street” liturgical drama functional to preaching and perhaps related to the “Dance of the Maccabees” (chorea machabaeorum) in which the participants danced holding hands was already widespread at the level of the Sacred Drama (Morality Play). and they were taken away one by one by disturbing characters wrapped in a sheet.

La farandola is a medieval dance with a single basic step (mostly skipped), in which the row leader chooses the changes of direction, he makes and undoes just like the Norns with the thread of destiny. And therefore the farandola is the ritual dance in the celebrations of Samahin because it is the dance of death: everyone must travel the same path abandoning themselves to the will of those who lead the dance, to symbolize chained humanity that can only follow the path traced, and however a sort of collective journey through the experiences of life, towards its mysterious center. The farandola is probably the oldest dance so tied to the primitive agrarian rites: it is the dance of the labyrinth with its snail and snake figures, the dance around the fire, the sacred center of village life. Thus the labyrinth always has an exit and the dance is a dance of death and rebirth to symbolize the concept of eternal return.

The farandola is probably the oldest dance in the world dedicated to the Lady of the Labyrinth which we find in the Minoan culture of 1400 BC, a dance connected to the mysteries of fertility and described by Homer in the shield of Achilles. 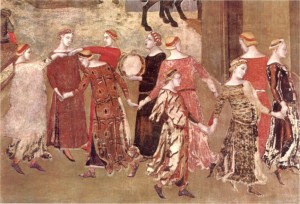 In the figure (from the fresco by Ambrogio Lorenzetti- Palazzo del Buonconsiglio, Siena – Italy) the two women leaders raised their arms in an arc to let pass below the rest of the chain (which was already drawing a sinuous serpentine movement), just a tambourine and the voice to cadence the rhythm and from the lightness with which the dancers move it would seem that they dance on tiptoe without lean their heel.

The dance has kept its legacy in Provence as the traditional dance par excellence (for every occasion).