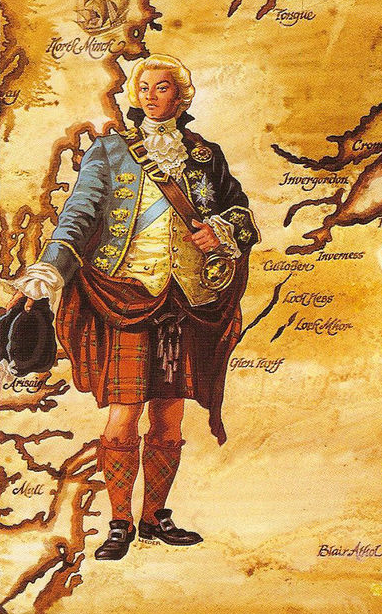 “Twa Bonnie Maidens” is a jacobite song published by James Hogg in “Jacobite Relics”, Volume II (1819). It refers to the occasion when Bonnie Prince Charlie sailed with Flora MacDonald from the Outer Hebrides to Skye, dressed as Flora’s maid. The event described here took place during Bonnie Prince Charlie’s months in hiding after his defeat at the Battle of Culloden (April 16, 1746). By late July, the Hannoverians thought they had Charlie pinned down in the outer Hebrides.

The prince had managed to get to the Island of Banbecula of the Outer Hebrides, but the surveillance was very tight and had no way to escape. And here comes Flora MacDonald.
In the anecdotal version of the story, Flora devised a trick to take away Charlie from the island : on the pretext of visiting her mother (who lived in Armadale after remarried), she obtained the safe-conduct for herself and her two servants; under the name and clothes of the Irish maid Betty Burke, however, it was hidden the Bonny Prince!: Il Principe e la Ballerina

Hogg took the Gaelic words down from a Mrs. Betty Cameron from Lochaber.
“Was copied verbatim from the mouth of Mrs Betty Cameron from Lochaber ; a well-known character over a great part of the Lowlands, especially for her great store of Jacobite songs, and her attachment to Prince Charles, and the chiefs that suffered for him, of whom she never spoke without bursting out a-crying. She said it was from the Gaelic ; but if it is, I think it is likely to have been translated by herself. There is scarcely any song or air that I love better.”
Quadriga Consort from “Ships Ahoy ! – Songs of Wind, Water & Tide” 2011 ♪
Marais & Miranda from A European Folk Song Festival 2012 (I, III)
Archie Fisher from “The Man with a Rhyme” 1976

NOTES
1) Minch=channel between the Outer and Inner Hebrides
2) corry=a hollow space or excavation in a hillside
3) Flora MacDonald
4) Bonnie Prince Charlie
5) the stanza is a synthesis between the III and the IV of the version reported by Hogg
6) The Nest Point is another striking view on the western tip of the Isle of Skye (on the opposite side of Portree), an excellent spot to watch the Minch the stretch of sea that separates the Highlands of the north west and the north of Skye from the Harris Islands and Lewis, told by the ancient Norse “Fjord of Scotland”
At the time of the Jacobite uprising there was still no Lighthouse designed and built by Alan Stevenson in the early 1900s.

TUNE: Planxty George Brabazon or Prince Charlie’s Welcome To The Isle Of Skye?

The Irish harpist Turlough O’Carolan (the last of the great itinerant irish harper-composers) wrote some arias in homage to his guests and patrons, whom he called “planxty”, whose text in Irish Gaelic (not received) praised the nobleman on duty or commemorated an event; the melodies are free and lively with different measures (not necessarily in triplets). With the title of George Brabazon two distinct melodies attributed to Carolan are known.
“George Brabazon” was retitled in Scotland “Prince Charlie’s Welcome to the Island of Skye” in honor of the Pretender as the vehicle for the song “Twa Bonnie Maidens.” It also appears in the Gow’s Complete Repository, Part Second (1802) under the title “Isle of Sky” (sic), set as a Scots Measure and with some melodic differences in the second part. This is significant, for it predates the earliest Irish source (O’Neill) by a century.
Source “The Fiddler’s Companion” (cf. Liens).
J.J. Sheridan
Siobhan Mcdonnell

The Chieftains  in Water From the Well 2000

“Over the Sea to Skye”