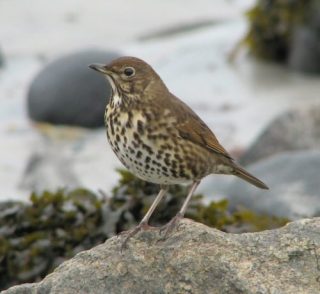 Smeòrach Chlann Dòmhnaill (‘The Mavis of Clan Donald’) is a scottish gaelic song in which the poet praises Sleat MacDonalds and North Uist.
It was composed by John MacCodrum (Iain Mac Fhearchair 1693–1779) one of the earliest of the “village poets”‘, who penned it as an ‘antiquarian’ re-creation of the Celtic bard Ossian in the 1760s

He says that he is a on the tops of the hills, looking at the sun and clear skies. He describes his own land, as the land of heroes and of poets. Clan Donald are praised for their skill and bravery in battle, there are also Jacobite references in the song.

References
* partially from Tom Thomson
1) “Mavis is indeed a colloquial name for the song thrush but can refer to both male and female birds. It appears to have been used in East Anglia, Ireland and Scotland. The name Mavis appears in Chaucer and was used by other Middle English poets. It comes from the French word mauvis and may be of Celtic origin. It was used by Shakespeare, as was the word throstle for song thrush, which, in East Anglia, refers to the mistle thrush. Just to confuse things, in southwest Scotland Mavis is generally the word used for the mistle thrush with throstle referring to the song thrush. Other names for the song thrush include dirsh, thrusher, thirstle and throggle and for the mistle thrush, skirlock, gawthrush, felfit and stormcock.” (in http://ww2.rspb.org.uk/birds-and-wildlife/bird-and-wildlife-guides/ask-an-expert/previous/mavis.aspx)
But in this poem we can see the original gaelic word that is smeòrach (song thrush, mavis -turdus philomelos) and not smeòrach-mhòr or smeòrach-ghlas (mistle thrush -turdus viscivorus)

2) Tom Thomson notes “glas can mean a whole range of colours. Usually green (green field – that colour is glas), also blue, wan, grey-green, grey-blue, pale, etcetera. Or it can be a noun – lock, handcuff, … And while “lann” can mean blade or sword, it can also mean repository, enclosure, area… so a glas-lann could be a building with lots of locks (and rusgadh could perhaps mean opening it up so prisoners could escape) – but I think the “sword” meaning is much more likely in mid-18th century Gaelic poetry. A decade later after the German King and the anti-catholic parliament had continued their attempts at genocide and/or ethnic cleansing for a further decade and passed more laws clearly deigned to ensure that no Gael remained free, the lockup meaning would perhaps have been feasible, but not as early as I think this was written.”

LINKS
https://dasg.ac.uk/corpus/textmeta.php?text=165&uT=y
‘The Uist Collection – The poems and songs of John MacCodrum, Archibald MacDonald, and some of the minor Uist bards’ (Rev. A. MacDonald ed., 1894
https://archive.org/details/uistcollectionpo00macd