The text was written by Paul Huson in his “Mastering Witchcraft” – 1970 inspired by the Scottish ballad “The Twa  Magicians“: Fith Fath is a enchantment of concealment or transmutation, in this lyrics it is the seasonal cycle of transmutations. Caitlin Matthews added a melody in 1978. Today the song is considered a traditional one.

The ritual of the Love chase was to be typical in Beltane when the Queen of May or the Goddess Maiden and the King of May, the Green Man was united to renew the life and fertility of the Earth: still in the Middle Age the boys dressed in green like forest elves ventured into the greenwood (the sacred wood), playing a horn so the girls could find them. Or they turned into hunters and followed magical transmutations with their prey.

NOTES
1) The Gaelic name “Druidh dhubh” translates as “bird druid” also called “Bran’s sparrow” (the god of prophecy). Sacred animal whose killing was considered taboo and a bearer of misfortune, but not during the time of Yule. In his book “The White Goddess”, Robert Graves explains that in the Celtic tradition, the struggle between the two parts of the year is represented by the struggle between the king holly (or mistletoe), -the nascent year- and the king oak -the dying year. At the winter solstice the king holly wins over the king oak, and vice-versa for the summer solstice. In oral tradition, a variant of this fight is represented by the robin and the wren, hidden between the leaves of the two respective trees. The wren represents the waning year, the robin the new year and the death of the wren is a passage of death-rebirth. see more
2) the mystery can not be revealed in words: the initiatory path is accomplished and once understood it is not possible to express.
3) the Horned God is a syncretic sum of ancient deities represented with horns and symbols of fertility and abundance (Celtic Cernunnos and Greek-Roman divinities Pan and Dionysus). According to some scholars, this deity was the pagan alternative of the Christian God, to whom those who remained anchored to the old traditions continued to pay veneration, in short, the ideal candidate for the figure of the Devil! But in my opinion it was been the Christian fanaticism to flatten and standardize all the other cults in a single devilish cult.
The idea of ​​the Horned God developed in the occult circles of France and England in the nineteenth century and his first modern depiction is that of Eliphas Levi of 1855, but it was Margaret Murray in “The Witch-cult in Western Europe”, 1921 to build the thesis of a unique pagan cult that survived the advent of Christianity. This theory, however, is not supported by rigorous documentation and certainly we can find the persistence up to the modern age of cults or beliefs present in various parts of Europe attributable to religion towards the Ancient Gods. Many of these beliefs were absorbed into Christianity and finally fought as diabolical when it was not possible to incorporate them into the new cult.
According to the Wicca tradition, the God is born at the Winter solstice, marries the Goddess to Beltane and dies at the Summer Solstice being the masculine principle equivalent to the triple lunar Goddess that governs life and death. 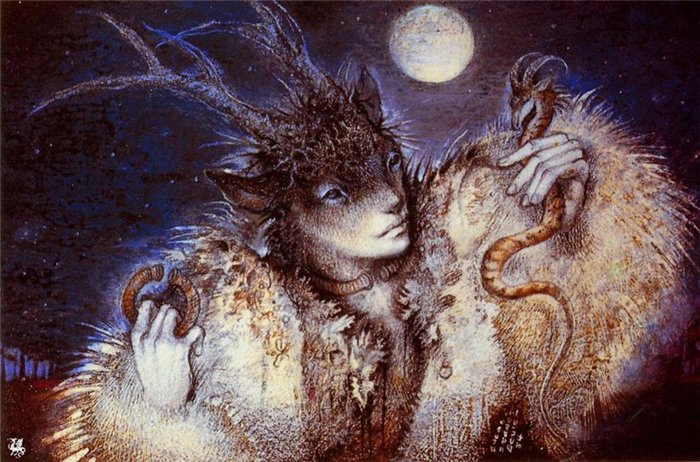 4) Similarly Isobel Gowdie, tried for witchcraft in 1662 in Scotland reveals to his torturers the formula of a Fith Fath
I sall gae intil a haire,
Wi’ sorrow and sych and meikle care;
And I sall gae in the Devillis name,
Ay quhill I com hom againe.
Much has been written about witches, especially on the great witch-hunt that took place on the two sides of the Christian religion one step away from the “Century of Enlightenment” and not in the dark Middle Ages. Symptom of a cultural change that will shake the “certainties” of the Western religion. Witches or sorcerers have always existed, they are those who use magic, who can see beyond the material accidents and undertake a journey of research and ancient knowledge. Obscene it was been what Catholics and Protestants did in their “struggle” for power, to annihilate those who were seen as a threat to the True Faith: a bloody struggle of religion that has exacerbated the boundaries of tolerance. Fith Fath is a spell of concealment or transmutation. It is reported and described in the book “Carmina Gadelica” by Alexander Carmicheal (vol II, 1900)
“They are applied to the occult power which rendered a person invisible to mortal eyes and which transformed one object into another. Men and women were made invisible, or men were transformed into horses, bulls, or stags, while women were transformed into cats, hares, or hinds. These transmutations were sometimes voluntary, sometimes involuntary. The ‘fīth-fāth’ was especially serviceable to hunters, warriors, and travellers, rendering them invisible or unrecognisable to enemies and to animals.” (from here)

NOTES
* translated by Alexander Carmicheal
1) “deer aspect”; in reality with the spell it is possible to change into any animal form.
The red deer is the animal par excellence of the woods, the coveted prey of hunting, but also mythological animal lord of the Wood and of the Rebirth. For the Celts of the Gauls Cernunnos was the god of fertility with antlers on his head, the animal equivalent of the spirit of wheat. Magic guide, messenger of the fairies, the deer (especially if white) is associated with the Great Mother (and the lunar goddesses) but also with Lug (the Celtic equivalent of a solar deity). As Lugh’s animal it represents the rising sun (with the horns equivalent to the rays) and so in Christianity it is the representation of Christ (or of the soul that yearns to God): it is the king Deer cyclically sacrificed to the Mother Goddess to ensure fertility of the earth. “I am the seven-stage stag” sings the bard Amergin and so the druid-shaman should be dressed during the rituals with horns and deer skins see more
2) Danu (or Anu) mother goddess of the waters. It was the time of primordial chaos: dry deserts and boiling volcanoes, it was the time of the great emptiness. Then from the dark sky a trickle of water fell on the earth and life began to blossom: from the ground grew the sacred tree and Danu (the goddess Mother), the water that descended from the sky, nourished it. From their union the Gods were born ..
Hypogeic waters, labyrinthine caves, spring waters but also river running waters were the sites of prehistoric and protohistoric worship throughout Europe. In particular for the Keltoi Danu was the Danube near whose springs their civilization was born. see more
3) The name derives from the root “breo” (fire): the fire of the blacksmith’s forge combined with that of artistic inspiration and the healing energy. Also known as Brighid, Brigit or Brigantia, she is the goddess of the triple fire, patron saint of blacksmiths, poets and healers. He bore the nickname Belisama, the “Shining” and was a Solar Goddess (near the Celts and the Germans the Sun was female). It was dedicated to her the End of Winter Festival which was celebrated in Celtic Europe at the Calends of February. It was the party of IMBOLC, the festival of the purification of the fields and of the house to mark the slow awakening of Nature.
4) nobody knows that animal is a vigilant explorer, surely a mistake of transcription of Carmicheal
5) follows an invocation of the three kingdoms, Nem (sky), Talam (Earth) Muir (sea) and or if we want world above, middle and below

THE MIST OF AVALON

With the invocation a magical fog it is materialized, that is the mist of Avalon (or Manannan), which acts as a means of transport to the Otherworld. The fog has a dual nature, of concealment and of passage. Another word for “fog”, in Irish origins, is féth fiadha which means “the art of resembling”. Both gods and druids can evoke magical fog as a means of communication between the two worlds. The divination was therefore the féth fiadha.
The prayer “Fath Fith” seems to be the invocation of the hunter to hide from his prey, but it was also used as a form of divination in a “threshold place” for the magical experience of space such as the river bank or the coast of the sea, the compartment of an access door to the building or a bridge. But also time like dawn and sunset which are neither day nor night nor the holy days that are on the border between the seasons.
In doing so you find yourself in a place that is a non-place that some call the opaque world. The Tale of Ossian and the Fawn

Still Alexander Carmicheal always in the chapter of Fith Fath tells the meeting of the boy Oisin (Ossian) with his mother: Ossian is a legendary bard of ancient Scotland or Ireland, compared to Homer and Shakespeare, thanks to the alleged discovery of his poems in Scotland . His legends chase in Ireland, Isle of Man and Scotland, but his popularity only grew in the mid-1700s when James MacPherson wrote “The Songs of Ossian” claiming to have found his manuscripts and fragments in the Scottish Highlands, among them a epic poem about Fingal, the father, who said he had “simply” translated, actually inventing: the ossianic fashion flared up throughout Europe giving life to Romanticism. continua

According to this Scottish version, Oisin borned by Finn Mac Coll (Fionn Mac Cumhaill) and a mortal woman, but previously Finn had been the lover of a fairy that he had abandoned to marry the daughter of men; so the fairy for revenge made the spell of the “Fath Fith” on the human bride turning her into a hind that went away and shortly thereafter gave birth to Oisin (the little fawn) on the island of Sandray (Outer Hebrides) in the Loch-nan-ceall in Arasaig.
Now we must make a leap of time and resume the story at the time of Ossian’s childhood when he returned to live with his father and the rest of the Fianna. One fine day, as usual, the are a-chasing a majestic deer on the mountain, when a magical mist descended over them, causing them to separate and disperse.
So Ossian wandered without knowing where he was and found himself in a deep green valley surrounded by high blue mountains, when he saw a fawn so beautiful and graceful that he remained admired to look at her. But when the spirit of the hunt took over in him and he was about to hurl the spear, she turned to look him straight in his eye and said “Do not hurt me, Ossian,I am thy mother under the “fīth-fāth,” in the form of a hind abroad and in the form of a woman at home. Thou art hungry and thirsty and weary. Come thou home with me, thou fawn of my heart “And Ossian followed her and passed a door in the rock and as soon as they crossed the threshold, the door disappeared and while the hind changed into a beautiful woman dressed in green and with golden hair.
After feasting on his fill, refreshed by drinks and music and having rested for three days, Ossian wanted to return to his Fianna, so he discovered that the three days in the mound under the hill, was equivalent to three years on earth. Ossian then wrote his first song to warn the mother-hind to stay away from the hunting grounds of the Fianna: ‘Sanas Oisein D’a Mhathair (Ossian’s To-To-His-Mother) of which Carmicheal reports a dozen stanzas

WHAT CAN A YOUNG LASSIE DO WI' AN AULD MAN