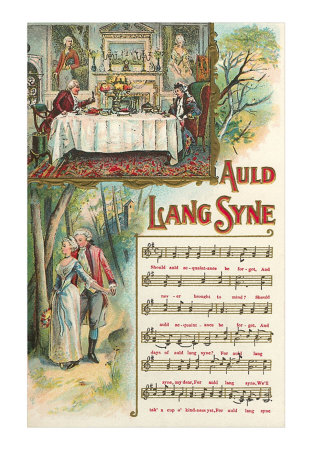 At New Year’s Eve the most widespread song in Scottish homes is Auld Lang Syne, a song sung all over the world on many occasions.
The song is accompanied by a collective ritual: in a circle we hold each other’s hands during the first verse. Then the arms must be crossed by grasping the hands of the neighbor during the last verse.

The title is composed of three terms in Scottish that mean old, long, since three words to indicate the past time, “the good old days”. This is an old song that Robert Burns says he heard from an elderly singer, Burns also states that the song had been passed down only orally. Here is the correspondence between Burns and the publisher George Thomson (1793): “The following song, an old song, of the olden times, and which has never been in print, nor even in manuscript until I took it down from an old man’s singing, is enough to recommend any air”

Similar rhymes and melodies date back to 1500: in particular two, the ballad Auld Kyndnes Foryett -in Bannatyne Manuscript 1568- and the ballad attributed to the court poet Sir Robert Ayton (1570-1638) published in 1711 by James Watson in “Choice Collection of Scots Poems” collection; for the latter some verses are the same that are found in the Burns’ ones.
Should auld Acquaintance be forgot,
and never thought upon,
The Flames of Love extinguished,
And freely past and gone?
Is thy kind Heart now grown so cold
In that Loving Breast of thine,
That thou canst never once reflect
On Old-long-syne?

In 1724 Allan Ramsay wrote in his “A Collection of Songs” the song entitled “Should auld acquaintance be forgot” (perhaps taken from the sixteenth-century ballad Auld Kyndnes Foryett) and the song was then published in Vol 1 of the “Scots Musical Museum” 1787, with the title “Auld Lang Syne” but the verses are light years away from those of Burns!

Johnson publishes “Auld Lang Syne” from the first version of Burns in the Scots Musical Museum, vol 5, 1796; but Robert Burns sent his writings about this song even to the publisher George Thomson, and in particular his third version. Later, Thomson learns from Stephen Clarke that Johnson already had a copy of Burns’ song and that the melody was always transcribed by Johnson in the version of Ramsay. Burns, so he replies:‘The two songs you saw in Clarke’s are neither of them worth your attention. The words of ‘Auld lang syne are good, but the music is an old air, the rudiments of the modern tune of that name. The other tune you may hear as a common Scots country dance.’ Burns 1794.

So the first melody that Robbie calls “an old air” is that published by Johnson “O Can Ye Labor Lea“, while the second melody “For old long Gine my jo” is the one in Playford.

THE MARK OF A GENIUS

Burns’ merit was to write a couple of verses and to modify and arrange the others. A fragment written by Robert Burns in 1793 is kept at the Robert Burns Birthplace Museum (see)

THE MERIT OF THE EDITOR

WhenGeorge Thomson published “Auld Lang Syne” in the “Select Collection of Original Scottish Airs”, 1799 replaced the first melody with the much more popular one in the eighteenth century called “The Miller’s Wedding” (formerly in “Scots Reels”, Bremner 1759) and commonly called ‘Sir Alexander Don’s Strathspey’ because also played by the famous violinist Niel Gow: a typically Scottish dance melody the strathspey!

THE EDITOR MELODY WITH BURNS’ VERSES


Burns had already reused the same melody in two songs: “O can ye labor lea” ( “I fee’d a man at Martinmas”) and “Coming thro ‘the rye.

THE LEGEND ON DAVID RICCIO 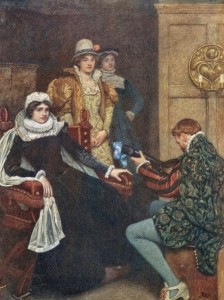 Lately on the web (of course only on Italian sites) in the wake of Jesse Blackadder’s novel “The Raven’s Heart”, 2011 they have spread the attribution of the melody to Davide Rizzo (or David Riccio as they called in Scotland ). The journalist and writer Renzo Rossotti (in “Assassinio in Scozia” da “Piemonte magico e misterioso”, Newton Compton Editori, 1994 see) in his “Assassinio in Scozia” reports an italian legend according to which David Riccio is the author of “Auld Lang Syne”, but this is indeed a legend.

Jim Malcolm  in Acquaintance
Velvety voice, pronounced seductively scottish, a splash of notes on the piano, guitar and violin background. The melody is slightly different as the sequence of strophes I, IV, II, III, V and the theme of the Waltz is recorded in the final played by the guitar alone

POPULARITY IN THE WORLD

The song has been translated all over the world (in at least forty languages). The popularity of “Auld Lang Syne” derives most probably from its inclusion with the title “Farewell Waltz” in the film “Waterloo bridge” (1940) directed by Mervyn LeRoy, with Vivien Leigh and Robert Taylor. This film was the prototype of the typical Hollywood melodrama.

The famous scene of the waltz.

The Farewell Waltz version was arranged by Cedric Dumont (1916-2007) Swiss composer, author and conductor and it was translated / arranged in Italian by the authors Larici & Mauri in 1943 like danceable. At the time, the Anglo-Saxon melodies were forbidden in Italy by the war censorship, but it was enough to change the title and arrangement and here is “Il valzer delle candele”!

The melody has finally become a new song titled “Il Canto dell’Addio” well know by all those who have been scouts, or have spent their summer in the italian colonies, or at the shelters run by priests and the like.