This medieval ballad ( from the North to the South of Europe) tells the story of a knight (Oluf, Olof or Olaf) and his meeting with a fairy creature asking him to dance (or to drink) with her: the knight refuses as he will be married in the morning, and the girl (elf or mermaid) places a curse on him (a quickly death for tomorrow).
The fairy is the fatal woman archetype, with her irresistible appeal, who kills her lover.
The real situation behind this tale is clear: a jealous woman because her lover has chosen to marry another one, kills him; in the norse version, he does not yield to the sexual charme, in the Scottish one he lets himself be tempted for the last time; but the result is always death: the man who let himself be guided by lust is entrapped and addicted by sex.

The fairy creatures love to dance and they do it in a circle holding hands and intertwining in a farandole from the unbridled rhythm. Fairies dance all moon night from dusk to dawn, but the time spent in their ring can be during seven years (or even centuries). Once you enter the circle you are forced to stay until the end of the dancing party, losing track of time and freedom. Sometimes the megalithic stones circles are considerated a Fairies Ring

Olaf returns home, meets his mother and sends her to call his relatives and his bride. At the arrival of his bride everyone tries to hide her the evidence of the groom death by vaguely answering the perplexed questions of the future wife, until at the time of consuming the marriage on their wedding bed, the woman he finds him dead.
In a very dramatic ending both the bride and the mother of Olaf kill themselves or die for pain!
A derivation-conclusion of the story goes on in another red thread drawn for all Europe, “the poisoned testament“, in which the son on his deathbed after being poisoned by a mysterious lady, returns home to his mother and declares his last wishes.

The story is partial: Olof is the son of the King and meets the mermaid on the beach, but he accepts her magic wine and remains enchanted. The siren will certainly lead him to death.

NOTES
1) this is clearly the last love meet, in view of the upcoming marriage
2) the siren always poses the same question, just as in the inquisitorial technique typical of the secret services and the state police, the same questions are obsessively repeated until the physical and mental exhaustion of the suspect; but only after drinking the love filter Olof is completely subjected to the siren and he has forgotten his human life.

In the Swedish folk tradition we also find other melodies and text versions, see for example “Herr Olof och Älvorna”.

The Danish version follows the pattern: the knight who runs in the night is invited to dance with elves and he is hit by a curse (ie he is poisoned with a magical drink) after his refusal, he preferred death rather than being subjected to the fairy kingdom .

NOTES
* from here
1) the interlayer recalls the telluric forces and the world below
2) fairy ring because of the typical dance in the circle preferred by fairies, the fairy circles are visually highlighted by a ring of mushrooms, flowers or trampled grass.
3 )seven years is the time that the rider will have to spend in the fairy world because he will no longer be able to leave the fairy ring until the dance stops (time flows differently in the fairy world)

Another title and melody from Sweden it is Elveskud (or Elverskud)

NOTES
*English translation from here
1) ancient unit of measurement
2) the ballad breaks in half, the modern versions in practice halve the ancient narration, leaving at the same time space for an open ending

ENGLISH VERSION: DANCE WITH ME

Steeleye Span from All Around My Hat, 1975

NOTES
1) while in the Scandinavian versions we imagine that the knight runs from his lover for a last night of passion, here and in the poetic version of Johann Gottfried von Herder a motive (or excuse) is more explicit: bring invitations to the guests for the imminent marriage

Even Goethe was inspired by history to write a romantic ballad – taken from italian Carducci with the title “La figlia del Re degli Elfi”. 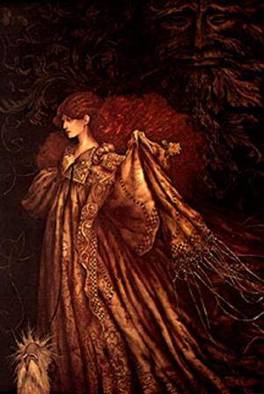