MAY DAY SONG  (May Day Carol) IN ENGLAND
(preface)

Manchester May Day.
“One tradition was for girls to don mainly white dresses, made from curtains or whatever, and carry around a broomstick representing a maypole. Another tradition was for boys to dress up in women’s clothing and to colour their faces – they were called molly dancers, ‘molly’ being an old expression for an effeminate man. Dr Cass[Dr Eddie Cass, the Folklore Society] says they went round quoting a verse. One such, from the Salford area, was: I’m a collier from Pendlebury brew. Itch Koo Pushing little wagons up a brew I earn thirty bob a week I’ve a wife and kids to keep I’m a collier from Pendlebury brew Dr Cass himself remembers both traditions. The girls would dance round the maypole and sing other songs, such as: Buttercups and daisies Oh what pretty flowers Coming in spring time To tell of sunny hours We come to greet you on the first of May We hope you will not send us away For we dance and sing our merry song On a maypole day (from here)

The version reproduced by Watersons in 1975 is taken from W & R Chamber “Book of Days” – 1869 – with words and music collected by Mr. Job Knight (1861) –  A.L. Lloyd comments
“The critical seasons of the year—midwinter, coming of spring, onset of autumn—were times for groups of carollers to go through the villages singing charms for good luck, in hope of a reward of food, drink, money. This one was sung on May Eve or thereabouts in Yorkshire and Lancashire, but it’s much like similar songs from any other county.”

This song is  titled “Drawing Near the Merry Month of May” and the text is also reported in Edwin Waugh’s book “Lancashire Sketches” (1869)
The area of reference is Yorkshire and Lancashire and “Swinton” was a small borough, then Salford city now become a part of Manchester (England)

The Watersons from For Pence and Spicy Ale -1975

The two melodies are different, the version of the Brass Monkey recalls the Padstow May Song, another song of springtime still popular ritual in the town of Padstow, Cornwall.
As reported in Chambers’ Book of Day (1869), Swinton’s two songs were the Old May song and the New May song. The Old May Song was a so-called Night song that was sung during the night by groups of mayers accompanied with various musical instruments.

We heve a direct testimony in the book”Memoirs of Seventy Years of an Eventful Life“  from Charles Hulbert (Providence Grove, Near Shrewsbury:1852), pg 107
“With feelings of indescribable pleasure, I still call to my remembrance various customs and scenes familiar to my early years. Still present is the delight with which I hailed the approach of May-day morning, when a select company of the musical Rustics of Worsley, Swinton and Eccles, would assemble at midnight to commence the grateful task of saluting their neighbours with the sound of the Clarionet, Hautboy, German Flute, Violin, and the melody of twenty voices. On this occasion the leader of the band would commence his song under the window or before the outer door of the family “he delighted to honour” with
O rise up Master of this House, all in your chain of gold,
For the summer springs so fresh, green and gay;
I hope you’ll not be angry at us for being so bold,
Drawing near to the merry month of May.
In this strain, including some encomiums or happy allusion to the various qualifications of all the other branches of the family the whole were saluted: after which a purse of silver or a few mugs of good ale were distributed among the company; thus they proceeded from house to house, tilling the air with their music and happy voices, till six o’clock in the morning.”
Among the drinks with which the singers were refreshing their throat in addition to the inevitable beer there was also the Syllabub prepared with milk cream. see more

THE SWALCLIFFE MAY DAY CAROL 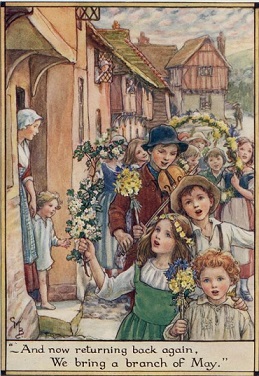 Here is the transcription of a 19th-century May song sung by Swalcliffe’s children, clearly a Day Song
“Swalcliffe (pronounced sway-cliff) is a village near Banbury in North Oxfordshire. The words of this carol were noted by Miss Annie Norris around 1840 from the singing of a group of children in the village. The words were passed onto the collector – and Adderbury resident – Janet Blunt in 1908, and she finally collected a tune for the song from Mrs Woolgrove of Swalcliffe, and Mrs Lynes of Sibford, at Sibford fete, July 1921.” (from here)

Magpie Lane from The Oxford Ramble 1993

I
Awake! awake! lift up your eyes
And pray to God for grace
Repent! repent! of your former sins
While ye have time and space
II
I have been wandering all this night
And part of the last day
So now I’ve come for to sing you a song
And to show you a branch of May
III
A branch of may I have brought you
And at your door it stands
It does spread out, and it spreads all about
By the work of our Lord’s hands
IV
Man is but a man, his life’s but a span
He is much like a flower
He’s here today and he’s gone tomorrow
So he’s all gone down in an hour
V
So now I have sung you my little short song
I can no longer stay
God bless you all both great and small
And I wish you a happy May

Bound down for Newfoundland