Same text for two sea shanties that differ in the choir
one is:
Hey-ro, me yellow gals,
a-do-a let me go
other one goes:
Heave away my bully boys,
We’re all bound to go. (see in  second part)

Yellow Gals (Girls) are not girls dressed in yellow or with blond hair and not even oriental ones, they are rather mulatto girls (creole) of the West Indies, according to the nineteenth-century seafaring jargon.

The term “Creole” can be understood in two exceptions: from the Spanish “crillo”, which originally referred to the first generation born in the “New World”, sons of settlers from Europe (Spain or France) and slaves. They could identify the urban population of New Orleans with light skin descended from black slaves, or all the French-speaking blacks of southwestern Louisiana, whose skin color changes from brown to black-blue, which are usually more people humble social condition.
The Spaniards in particular gave imaginative and specific names to the different gradations of the “pure” blood of hidalgo, mixed with the Amerindians (they even distinguished the Spanish born in America from those in the Land of Spain !!!) .

An overwhelming irish version for the  Doodle Let Me Go!
“A.L. Lloyd sang the shanty Doodle Let Me Go (Yaller Girls) live at the Top Lock Folk Club, Runcorn, on November 5, 1972. This concert was published in 2010 on the Fellside CD An Evening with A.L. Lloyd. Paul Adams commented in the sleeve notes: “Bert’s version seems to be based on that communicated to R.R. Terry by Harding ‘The Barbarian’—a black seaman from Barbados noted as “a fine shanty-man and first-rate seaman”. (from here)
The first part is similar to the so-called “pirate song” version in which the virtues of the girls of Madama Gashee, the famous brothel of Callao, are praised; while the second part is an emigration song that shares with the Yellow Meal the story of a young and unfortunate Irish girl landed in New York. 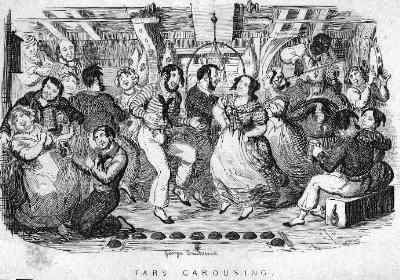 The Irish Rovers from Emigrate, Emigrate! 1975
A version similar to that recorded by A.L. Lloyd, the first song is an instrumental entitled The Passing of the Gale

NOTES
1) it might mean “girl” (from the French dou-dou or a word spread in the Caribbean as “in love”) as a term of endearment or for Do-a-me-go, or Don ‘let me go or Do let my go.. As noted the sailors had the custom to add a “d” before the letter “l” so the word “do let” becomes phonetically “do -d- let” and then doodle. Or again it could be a nonsense word (see discussion herei)
2) yella, yallow was used by British-American sailors to indicate the skin color of a mulatta (Creole). More rarely to indicate an Asian girl. “Yellow Gal” is a typical expression of the vaudeville songs mostly en-travestì (black-face minstrel songs)
3) Callao port of Peru renowned for the brothel of Madam Gashee
4) this name of a ship is recurring in the many variations of the sea shanty themed emigration song
5) the infamous Cape Horn
6) I do not think it refers only to the theft of clothes, the crossing at sea was dangerous for the young ladies not accompanied by servants or an adult male. Too often they were considered to be some prostitutes instead of victims of rape!

Over the hills and far away: Tom the piper

A beautiful melody collected by Thomas D'Urfey in his "Pills to Purge Melancholy" still very current ...