Same text for two sea shanties that differ in the choir
one is:
Hey-ro, me yellow gals,
a-do-a let me go (see jn first part)
other one goes:
Heave away my bully boys,
We’re all bound to go. 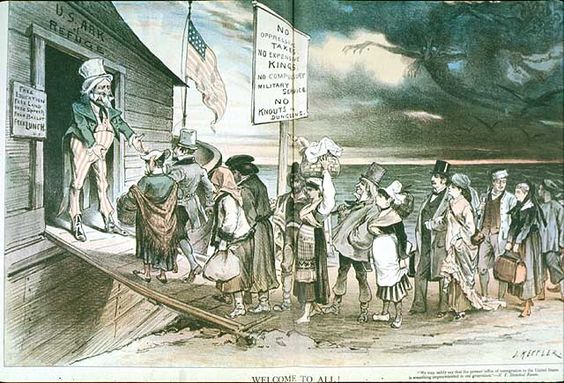 SECOND VERSION: THE IRISH EMIGRANT (We’re All Bound To Go)

Let’s not forget that it was precisely the transoceanic service between Liverpool and New York (inaugurated by Isaac Wright & Co’s Black Ball Line in 1816) to kick off the career of shantyman and “call and response” songs, that is, the coordinated work songs. Among the musical influences those Irish has taken a good slice of recognition!
The reasons are numerous, not least the significant traffic of goods and people between Ireland and Liverpool, which increased with the massive emigration in the years of the Great Famine; many Irishmen continued their journey to the Overseas destinations, but many others stopped in Liverpool, characterizing that town by a certain irishness both in the spoken word (the scouse) and in the music.

Obviously the crews of these ships, nicknamed Packet Rats were mostly Irish or came from areas with strong Irish immigration, so accents, musical styles and lyrics of the sea shanty came mostly from Ireland.

Thus “The Irish Emigrant” (also as “We’re All Bound to Go”) is an outward-bound windlass shanty on the melody of a jig.
The story describes the misadventures at sea of an Irish girl or an Irish boy who complains about the mistreatment suffered on the Packet Rat, in which mention is made of Mr. Tapscott, a Liverpool shipping agent, the melody follows the chorus Heave away my Johnny. Stan Hugill presents three series of lyrics and two melodies and the finale is different taking again cue from the Yellow Gals seen in the first part. (for a collection of versions see here)

John Roberts & Tony Barrand from Across The Western Ocean, 2000 write in the notes: Also known as The Irish Emigrant, this is another shanty from the collection of Hugill, who remarks that it is an example of a brake-windlass shanty, which in actual use on a ship was sung to a varying rhythm. The first line was fairly slow, as the brakes or levers were pulled down to waist level, end the next line faster as a second movement brought them down to knee level. Similar versions of the shanty appear in Colcard and Doerflinger. The ‘Tapscott’ referred to in the song was William Tapscott, Liverpool agent for the Black Ball Line (and also, for a time, of the Red Cross Line). (from here)
(first version: Stan Hugill)

3) or irish boy (see first version)
4) The brothers William and James Tapscott (the first based in Liverpool and the second in New York) organized the trip for immigrants from Britain to America, often taking advantage of the ingenuity of their clients. Initially they worked for the Black Ball Line and then set up their own transportation line for the Americas that provided a very cheap trip, but the conditions of the trip were terrible and the food poor. In 1849 William Tapscott went bankrupt and was tried and convicted of fraud against the company’s shareholders.
5) Joseph Walker, Kangaroo and Henry Clay are the names of the notorious British and American Packet Rats,
6) also written as “male”: the vessels were also a postal service and meal is the Irish pronunciation by mail; but here Tapscott deliberately creates the misunderstanding because they are instead bags of “meal”  that would have given to the passengers.
7) from “emigrant Irish boy” version by Stan Hugill (see)
8) the location is not clear to me
9) The Pennsylvania Canal (1830-1860) it was a network of navigable infrastructure built in the state of Pennsylvania for the transportation of goods that connected Pittsburgh to Philadelphia in the days when the railways were still in its infancy.(see)
10) It is not clear to me whether it refers to a trip as a passenger or a sailor
11) “corned” comes from the cover of meat with “grains” of salt to preserve it.
12) used in a derogatory sense: corn gruel served on board
13) Castle Clinton or Fort Clinton or Castle Garden was a circular fort located in New York City in Battery Park, in the southern part of the island of Manhattan: from the mid-nineteenth century, it was used as the first sorting center for the european immigration. The station was in operation until 1890, when the federal administration, under pressure of a second and more massive immigration wave coming from all the states of Europe, decided to open a more functional one in Ellis Island.