TITLES: A Fair Young Maid all in her Garden, There Was A Maid In Her Father’s Garden, Pretty, Fair Maid in the Garden, John Riley, Johnny Riley, The Broken Token, The Young and Single Sailor

Joan Baez popularised this ballad with John Reily title in the 60s:  it is a classic love story of probable seventeenth-century origins, in which the woman remains faithful to her lover or promised spouse who has gone to war or embarked on a vessel. The song is classified as reily ballad because it is structured as a dialogue between the protagonist  (in disguise) usually called John or George, Willie or Thomas Riley (Rally, Reilly) and the woman, example of loyalty ( first part) 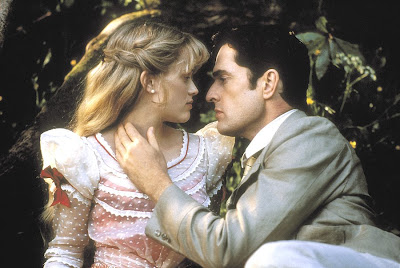 The text of this version reminds me of the Oscar Wild comedy, “The Importance of Being Earnest” Wilde’s contradictory to Shakespeare in the famous Juliet declaration on the name of Romeo:
“What’s in a name? That which we call a rose
By any other name would smell as sweet.”

This is the melody in the American tradition as collected in the field (Providence, Kentucky) in the 30s by Alan Lomax. Joe Hickerson penned “There are two ballads titled “John (George)  Riley” in G. Malcolm Laws’s American Balladry  from British Broadsides (1957). In number N36, the returned man claims that  Riley was killed so as to test his lover’s steadfastness. In number N37,  which is our ballad, there is no such claim. Rather, he suggests they sail  away to Pennsylvania; when she refuses, he reveals his identity. In the many  versions found, the man’s last name is spelled in various ways, and in some  cases he is “Young Riley.” Several scholars cite a possible origin  in “The Constant Damsel,” published in a 1791 Dublin songbook.
Peggy’s learned the song in childhood from a field  recording in the Library of Congress Folk Archive: AFS 1504B1 as sung by Mrs.  Lucy Garrison and recorded by Alan and Elizabeth Lomax in Providence,  Kentucky, in 1937. This was transcribed by Ruth Crawford Seeger and included  in John and Alan Lomax’s Our Singing Country (1941), p. 168. Previously, the  first verse and melody as collected from Mrs. Garrison at Little Goose Creek,  Manchester, Clay Co., Kentucky, in 1917 appeared in Cecil Sharp’s English  Folk Songs from the Southern Appalachians (1932), vol. 2, p. 22. Peggy’s  singing is listed as the source for the ballad on pp. 161-162 of Alan Lomax’s  The Folk Songs of North America in the English Language (1960), with  “melodies and guitar chords transcribed by Peggy Seeger.” In 1964  it appeared on p. 39 of Peggy’s Folk Songs of Peggy Seeger (Oak Publications.  edited by Ethel Raim). Peggy recorded it on  Folk-Lyric FL114, American Folk Songs for Banjo and her brother Pete included  this version on his first Folkways LP, FP 3 (FA 2003), Darling Corey (1950).” (from here)

The dialogue between them seems more like a skirmish between lovers in which she proves to be chilly and offended, while he, returned after leaving her alone for three years, jokingly pretends not to know her and asks her to marry him because he is fascinated by his graces! So in the end she yields and paraphrasing Shakespeare says “If you be he,  and your name is Riley..”

In this version the identification is based on the ring that probably the two sweethearts had exchanged as a token of love before departure. A beautiful Celtic Bluegrass style version!