In the sea shanties Sally Brown is the stereotype of the cheerful woman of the Caribbean seas, mulatta or creole, with which our sailor  tries to have a good time. Probably of Jamaican origin according to Stan Hugill, it was a popular song in the ports of the West Indies in the 1830s.
The textual and melodic variations are many.

In this version the chorus doubles in two short sentences repeated by the crew in sequence after each line of the shantyman, here the work done is the loading of the ship
Roll, boys! Roll boys roll!
Way high, Miss Sally Brown!

NOTE
1) “Bone in her teeth” is the expression used for a bow wave, usually implying that the vessel in question was moving pretty fast. (see more here)
2) the southernmost of the Caribbean islands
3) the front and the back of a ship have a specific terminology
4) In sailing, a block is a single or multiple pulley 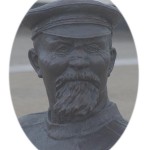 Not to be confused with “Spent My Money On Sally Brown”. Cecil Sharp ranks as capstan shanty.
In Short Sharp Shanties the project’s curators write”Although, by Hugill’s time, ‘this shanty had only one theme – Sally and her daughter’, Short’s text is not on this ‘one theme’ – it is based around a less overtly sexual relationship.  Short gave Sharp more text than he actually published. It is always possible that Short may be self censoring – but there is no indication that this is the case, and from other textual evidence in Sharp’s field notebooks (e.g. see the notes to Hanging Johnny), rather the reverse. We have added just two floating verses at the end“