For centuries people living along the coasts have learned to collect, for habitual consumption, different qualities of algae.
In particular in Scotland and Ireland, dulse algae and Irish moss have always been part of the diet of coastal inhabitants. 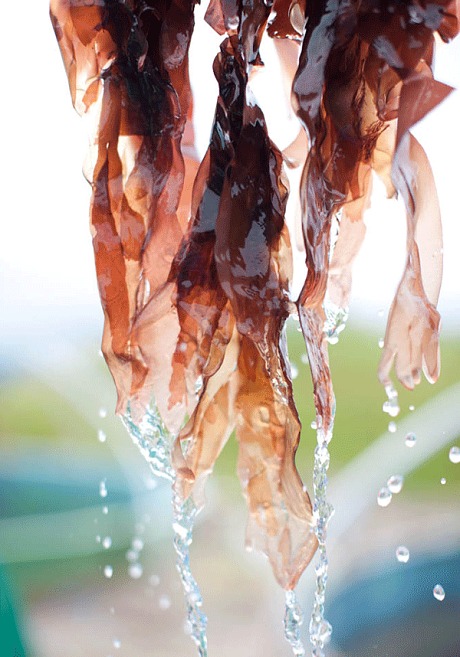 Similar to a little hand with the open fingers of a purple red, the dulse algae grows along the coasts of the North Atlantic and the North-Western Pacific and it is a superfood, rich iron, calcium, potassium vitamins, amino acids (high quality protein ) and mineral salts. Eaten raw it has an elastic consistency like chewingum and as such was consumed by the English sailors of the seventeenth century who chewed it instead of tobacco. It has a very salty taste, also called spicy and is a very versatile food.

The dulse algae are harvested mainly in Scotland, Northern Ireland, Scandinavia, Iceland and Brittany in the months between June and October during the low tide and they are sold in leaves or minced: the harvesters (in danger of extinction) leave the first hours of morning at high tide, when the sea withdraw they hand-picked dulse from rocks. For self-consumption, the collection of small quantities is done directly on the shore, among the rocks. The algae are then laid out on the beach to dry, at the end they are rolled up in large bales and are brought to the production plants for treatment and packaging.
It is essential that the waters of the sea where the harvest takes place are unpolluted (algae absorb large amounts of pollutants -fertilizers and heavy metals, so they are also good sweepers from the sea ..) and that the production chain guarantees high quality standards .

The Salt Flats from The Salt Flats 2011  ♪
Same melody but new arrangement, from Northern Ireland (Belfast) in the notes they wrote: “Pulling the Sea Dulse is a working tune detailing the harvest seaweed at the shore. It is surprisingly upbeat and the Dulse in question resonated with childhood memories of Dulse and Yellow Man at the Auld Lammas Fair in Northern Ireland.” (see more)

NOTES
1) she keeps loyalty to his lover
2) probably emigrated to America or embarked on some ship as a sailor (for example on a whaling boat).

THE SEAWEED-GATHERER IN IRISH BALLADRY