The Dowie Dens of Yarrow – a ballad from the Scottish Border. Murtagh teaches this song to Claire when they travel together looking for Jamie after he is taken by the Watch.
(continue “The Search” Outlander Tv season I)

“The Dowie Dens of Yarrow”, “The Dewy Dens of Yarrow” or  “The Breas of Yarrow”, “The Banks of Yarrow” exists in many variants in Child’s book ( The O Braes’ Yarrow Child ballad  IV, # 214). The story was also told in the poem by William Hamilton, published in Tea-Table Miscellany (Allan Ramsay, 1723) and also in  Reliques (Thomas Percy, vol II 1765): Hamilton was inspired by an old Scottish ballad of the oral tradition (see)
Kenneth S. Goldstein commented “Child printed nineteen texts of this beautiful Scottish tragic ballad, the oldest dating from the 18th century. Sir Walter Scott, who first published it in his Minstrelsy of the Scottish Border (1803), believed that the ballad referred to a duel fought at the beginning of the 17th century between John Scott of Tushielaw and Walter Scott of Thirlestane in which the latter was slain. Child pointed out inaccuracies in this theory but tended to give credence to the possibility that the ballad did refer to an actual occurrence in Scott family history that was not too far removed from that of the ballad tale.
In a recent article, Norman Cazden discussed various social and historical implications of this ballad (and its relationship to Child 215, Rare Willie Drowned in Yarrow), as well as deriding Scott’s theories as to its origin.” (see Mainly Norfolk)

ETTRICK FOREST
The area is a sort of “Bermuda triangle” of the Celtic world, a strip of land rich in traditional tales of fairy raptures and magical apparitions!
(see also the Tam lin ballad)

The hero of the ballad was a knight of great bravery, popularly believed to be John Scott, sixth son of the Laird of Harden. According to history, he met a treacherous and untimely death in Ettrick Forest at the hands of his kin, the Scotts of Gilmanscleugh in the seventeenth century.

THE AGREEMENT OVER  YARROW’S VALLEY

The song describes a young man (perhaps a border reiver) killed in an ambush near the Yarrow river by the brothers of the woman he loved. In some versions, the lady rejects nine suitors in preference for a servant or ploughman; the nine make a pact to kill the her real lover, in other they are men sent by the lady’s father.The reiver manages to kill or wound his assailants but eventually falls, pierced by the youngest of them.

The lady may see the events in a dream, some versions of the song end with the lady grieving, in others she dies of grief.
The structure is the classical one of the ancient ballads with the revealing of the story between the questions and answers of the protagonists and the commonplace of the death announced to the parents.

So many textual versions and different melodies, which I have grouped into three strands.

The melody was collected by Lucy Broadwood  from John Potts of Whitehope Farm, Peeblesshire, published in The Journal of the Folk Song Society, vol.V (1905).

Matthew White (Canadian countertenor): Skye Consort in the Cd “O Sweet Woods 2013”, the arrangement is very interesting, with a Baroque atmosphere that echoes the era in which the first version is traced. Only verses I, II, IV, V, VI, VIII and XIV are performed

NOTE
1) the north is not only a geographical location but a code word  in balladry for a sad story
2) marrow= a companion, a bosom friend, a kindred spirit (a husband)
3) dowue, dewy= sad, melancholy, dreary, dismal
Dens, dells= a narrow valley or ravine, usually wooded, a dingle 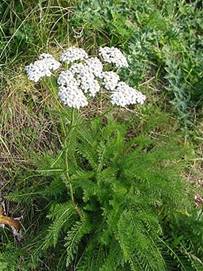 4) Yarrow is a river but also an officinal herb, Achillea millefolium. So the definition of the place “the valleys of the Yarrow” becomes more vague but also symbolic: the yarrow is a plant associated with death, and in popular beliefs the sign of a mourning.
From the healing powers already known in the times of Homer and used by the Druids, the plant is the main ingredient of a magic potion worthy of the secret recipe of the Panoramix druid. It is said that in the Upper Valle del Lys (Valle d’Aosta, Italy) the Salassi were great consumers of a drink that infused courage and strength. It became known as Ebòlabò and it is a drink still prepared by the inhabitants of the valley based on “achillea moscata”.
5) In some versions the boy is a country man but not necessarily a peasant, rather a cadet son of a small country nobility. Near Yarrow (Yarrow Krik) there is still a stone with an ancient inscription near a place called the “Warrior’s rest“.
6) Matthew White
“She killed here with a single sword
On the dewy dells of Yarrow”
7) the typical behavior of a devoted wife who looks after, combs and dresses her husband, the same care and devotion that she will give to the corpse
8)  In the Middle Ages the girls wore very long hair knotted in a thick braid
9) some interpret the verse as an expression of mourning in which the girl cuts her long hair (that reaches her knees) up to her waist. The phrase literally means, however, that she uses her hair to carry away the corpse interweaving them like a rope. The image is a little grotesque for our standards, but it must have been a common practice at the time
10) the verse says that the handsome peasant was the bravest of all, certainly not the brother! Second version: the lady makes a dream in which she is picking up the red heather on the slopes of the Yarrow, an omen of misfortune.
A Scottish legend explains how the common  heather has become white: Malvina, daughter of a Celtic bard, was engaged to a warrior named Oscar. Oscar was killed in battle, and the messenger that delivered the news gave her heather as a token of Oscar’s love. As her tears fell on the heather, it turned white.  Since then the white heather is the emblem of faithful love; the resemblance to the Norse legend of Baldur and the mistletoe is surprising.

3) heather bell is the name of the  Erica cinerea ; a Scottish legend explains how the common  heather has become white: Malvina, daughter of a Celtic bard, was engaged to a warrior named Oscar. Oscar was killed in battle, and the messenger that delivered the news gave her heather as a token of Oscar’s love. As her tears fell on the heather, it turned white.  Since then the white heather is the emblem of faithful love; the resemblance to the Norse legend of Baldur and the mistletoe is surprising.

THE HEATHERY HILLS OF YARROW

It’s Bothy band version that begins the story from the ambush and develops the dialogue between the lady and her relatives until her tragic death.
Bothy band (Tríona Ní Dhomhnaill voice) in After hours, 1979