The longest (as an extension) fair in Northern Ireland that runs along the central street of the town of Ballycastle, Co. Antrim is held on the last Monday and Tuesday in August: it is the Lammas Fair whose origins date back to the seventeenth century .

The Lammas Fairs as they say in the British Isles or the Country fairs as they are more commonly called in America are the big fairs that take place after the wheat harvest: already Medieval Fairs connected to the patron saint who attracted crowds of visitors and street vendors.
As the fairs grew, all kinds of entertainment were added: country games and tournaments, but also shows.
At one time it was mainly a livestock market (especially horses) where farmers gathered to sell and buy summer products, but also an important socialization event for isolated farms.
In the season of abundance, the earth was thanked for its fruits, and joy was shared with music, dance and games. In the Celtic tradition it was Lughnasad, the time of the plenary assemblies, of great markets and fairs, of horse races together with other games for the warriors, but also of poetic and musical certams in homage to peace. 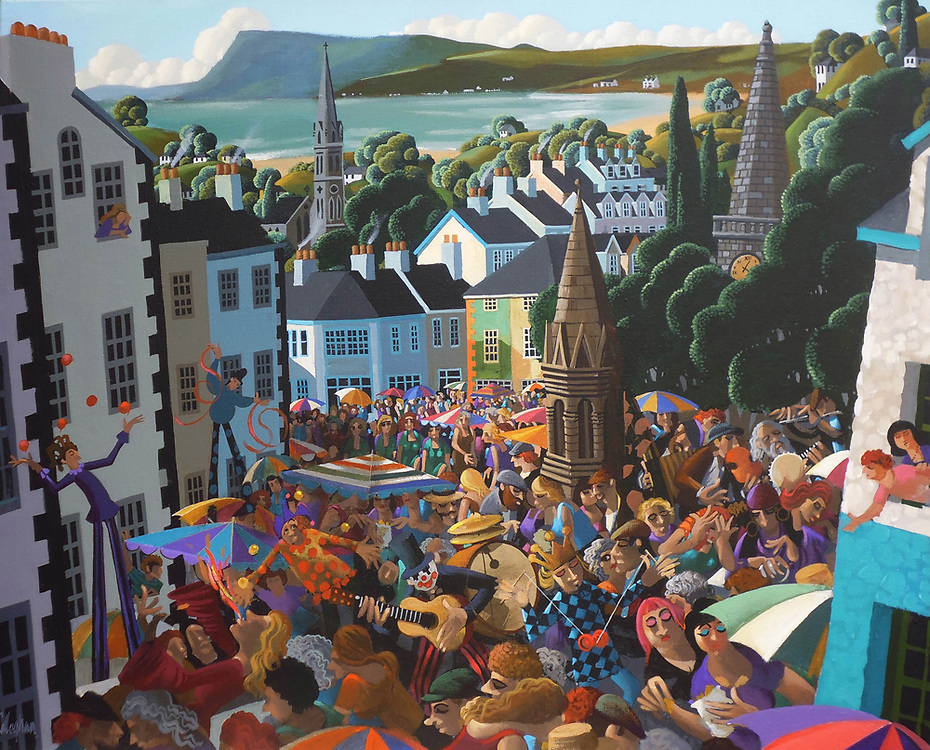 A fair number of Celtic ballads are about a market day, particularly a fair day, “Ould Lammas Fair” was written by John Henry MacAuley of Ballycastle, owner in the 20-30 years of the Bog Oak Shop on Ann Street: he was a violinist and a skilled wood carver, renowned for his music and his sculptures. Bog oak (or more generally bog wood) is a wood that has been imprisoned in the marshy mud and has been “mummified” (dried) by the natural acidic processes in such a way as to present itself compact and without cracks, particularly suitable for fine workmanship. In English it is said “morta”.
Ottilie Patterson 1966 (which omits the verses written in brackets)

NOTE
1) dulse and yellowman (red alga and toffee) is a typical combination of the fair, a street food with sweet and savory taste by biting a gummy red seaweed dried with a sticky yellow toffee.
Yellowman is a specialty of the fair in the county of Antrim: it is a toffee with a strong yellow color: the preparation is based on sugar, butter, corn syrup, water with the addition of bicarbonate and vinegar to obtain the honeycomb effect (aerated) and the yellow color. The preparation is simple but you need to be careful about the temperature because the caramel sugar does not burn (or crystallize because it is too mixed); the caramel must reach a temperature of 150 ° C to be at the “hard crack” stage (when it has cooled it will break into relatively hard pieces)
Pulling the sea-dulse
2) the first world war which MacAuley did not participate in because he was disabled following an accident on his father’s farm when he was a boy
3) French for toasting
4)  Margy river
5) Knocklayde is a hilltop overlooking Ballycastle excellent vantage point to admire the sea and the surrounding countryside
6) the image recalls Yeats and his Innisfree isle

The fair in a vintage movie of the 1950s

From “Drums of Autumn” of the Outlander saga written by Diana Gabaldon chapter 4.In the futu ...