A fertile vein of the European balladry tradition that has its roots in the Middle Ages, is the so-called “girl on the beach”; Riccardo Venturi summarizes the commonplace “solitary girl who walks on the shores of the sea – coming ship – commander or sailor who calls her on board – girl who embarks on her own will – rethinking and remorse – thoughts at the maternal / conjugal house – drama that takes place (in various ways) “
In the “warning ballads” the good girls are warned not to fantasise, to stay in their place (next to the fireplace to crank out delicious treats and children) and not to venture into “male roles”, otherwise they will end dishonored or raped or killed. Better then the more or less golden cage that is already known, rather than free flight.
Every now and then, however, the girl manages to triumph with cunning, over the male cravings, so in the “(Fair) Maid on the Shore” she turns herself into a predator!

MAIDEN IN THE SHORE

It is a mermaid, which the captain sees on a moonlit night, who is walking along the beach (it is well known that selkies and sirens can walk with human feet on full moon nights). Immediately he falls in love and sends a boat to carry her on his ship (by hook or by crook), but as soon as she sings, she casts a spell on the whole crew.
And here the fantastic and magical theme ends: the girl takes all gold and silver and returns to her beach, far from being a fragile and helpless creature, so also her looting the treasures recalls the topos of the siren that collects the glistening things from ships (after having caused shipwreck and death) to “furnish” his cave! 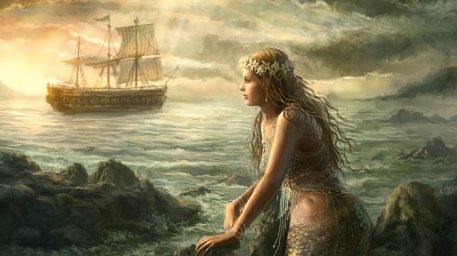 Bertrand Bronson in his “Tunes of the Child Ballads” classifies “Fair Maid on the Shore” as a variant of Broomfield Hill (Child # 43), the ballad was found more rarely in Ireland (where it is assumed to be original) and more widely in America (and in particular in Canada). Thus reports Ewan MacCall (The Long Harvest, Volume 3) “More commonly found in the North-eastern United States, Nova Scotia and Newfoundland is a curious marine adaptation of the story in which the knight of the Broomfield Hill is transformed into an amorous sea-captain. The young woman on whom he has designs succeeds in preserving her chastity by singing her would-be lover to sleep.”

A.L. Lloyd sang The Maid on the Shore in his album The Foggy Dew and Other Traditional English Love Songs (1956) and commented in the notes “As the song comes to us, it is the bouncing ballad of a girl too smart for a lecherous sea captain. But a scrap of the ballad as sung in Ireland hints at something sinister behind the gay recital. For there, the girl is a mermaid or siren. “

NOTES
having transcribed the text directly from listening, there are some words that escape me (and that for a mother-tongue are very clear!) Any additions are welcome !
1)  the verse is used as a refrain on the call and response scheme typical of the sea shanty
2) the captain promises a substantial reward to his sailors
3) in other more explicit versions the cabin boy is sent to show rings and other precious jewels, asking her to get on board to admiring ones more beautiful
4) in a more cruel version the captain threatens to give the girl to his crew, if she will not be nice to him
“First you will lie in my arms all this night
And then I’ll give you to me jolly young crew,
5) It is missing
“Oh thank you, oh thank you,” this young girl she cried,
“It’s just what I’ve been waiting for-o:
For I’ve grown so weary of my maidenhead
As I walked all alone on the shore.”

There is a young maiden, she lives all a-lone

It is the Irish version that dwells on the magic song of the siren and its supernatural power that gives us oblivion.
The ballad has many interpreters mostly in the folk or folk-rock field.

NOTES
The textual version of the John Renbourn group differs slightly from Stan’s version
1) There was a young maiden, who lives by the shore
Let the wind blow high, blow low
no one could she find to comfort her mind
and she set all a-lone on the shore,
she set all a-lone on the shore
2) or Sea
3) The captain had silver, the captain had gold
And captain had costly ware-o
All these he’ll give to his jolly ship crew
to bring him that maid on the shore
4) And slowly slowly she came upon board
the captain gave her a chair-o
he sited her down in the cabin below
adieu to all sorrow and care
5) in the version of Renbourn the sentence is clearer, it is the pains of love that the captain tries to alleviate by rape the girl!
6) She sited herself in the bow of the ship
she sang so loud and sweet-o
She sang so sweet, gentle and complete
She sang all the seamen to sleep
7) She part took of his silver, part took of his gold
part took of his costly ware-o
she took his broadsword to make an oar
to paddle her back to the shore,
8) Your men must be crazy, your men must be mad
your men must be deep in despair-o
I deluded at them all as has yourself
again I’m a maiden on the shore,

NOTES
1) the sentence would make more sense if it were instead “to calm his restless mind”
2) the reference to the good weather is not accidental, in fact the sighting of a siren was synonymous with the approach of a storm
3) here is the spell of oblivion hidden in the siren song
4) the woman is not just a thief but a fairy creature that steals the health of the sailors