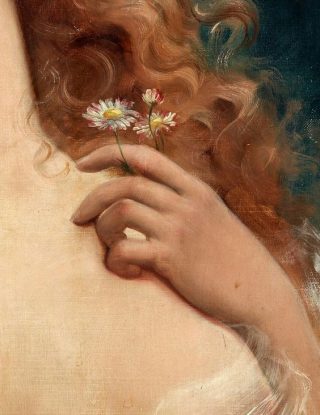 Lady Maisry is a Scottish ballad about seventeenth-century, that deals with a hot topic (in a more than literal sense) for those times: an unmarried woman who became pregnant has been burnt on the pyre.
Or rather, an unmarried woman who became pregnant and did not want to bow to an arranged marriage to save the honor of the family, has been burnt (and her own relatives lit the pyre). This at least in this ballad, in which the protagonist is a Lady of blue blood!
Dark times those of the Middle Ages (which lasted until the seventeenth century) in the Lowlands and Highlands of Scotland!
The literary sources are mainly two, Professor Child (Child ballad # 65) and Motherwell (“Bonnie Susie Cleland”) – as Riccardo Venturi points out, there is also the early eighteenth-century lesson of Robert Jamieson in “Popular Ballads And Songs From Tradition, Manuscripts And Scarce Editions With Translations Of Similar Pieces From The Ancient Danish Language “(1806).
According to some scholars, the ballad is a “collection of fragments” from other ballads and reassembled by some writers and this would also explain the poor diffusion of the same in the oral tradition.
The recorded versions are a few, among these I would point out this Lady Maisry of Lucy Pringle e Chris Wright (in The Speaking Heart 2010)

As often happens for old ballads the melodies are not unique, here is the “classic” arrangement by John Duarte
English Suite no.5, op.112

This other version by a great interpreter of early music, John Langstaff, begins around half-ballad, the lover arrives when Maisry is already dead. We do not know anything about the background that led to the death of the lady.
The version comes from “One Hundred English Folksongs” reported by Cecil J. Sharp (1916) who omits the refusal of the lady to marry with a Scottish suitors and the family’s decision to send her to the stake . (cf)

The most complete recording of the “main” version reported by Professor Child (and reworked by Peter Bellamy by stripping some stanzas and adapting it to a melody composed by him) was recorded more recently by Chris Foster who found it in Hammond Ms at Vaughan Williams Memorial Library in London.
“Henry Hammond collected the song in 1906 from Sam Gregory at Beaminster, a small Dorset town … I filled out the Sam Gregory text with verses from versions in the Child collection in order to complete the story.”

This is the adaptation of the ballad set in Dundee, in which the protagonist is named Susy, reported by William Motherwell (Minstrelsy, Ancient and Modern 1827): the version of Jean Redpath has become a standard, the melody of the refrain vaguely reminds me of Loch Lomond .
In this version there is no mention of “fait accompli” (sex) or “fruit of sin” (illegitimate child), it seems more the determinated stubbornness of a daughter in love with a stranger, who does not want to submit to her parents. In traditional ballads, it is known, fin amor is considered a serious disease that brings death and destruction (cf)