The lea-rig (The Meadow-ridge) is a traditional Scottish song rewritten by Robert Burns in 1792 under the title “I’ll Meet Thee On The Lea Rig“.
The term Rigs describes an old cultivation technique that involves working the land in long and narrow strips of raised land (the traditional drainage system of the past): the fields were divided into earthen banks raised, so that the excess water drained further down the deep side furrows. These bumps could reach up to the knee and hand sowing was greatly facilitated: the grass grew in the lea rigs.

A “romantic” meeting in the summer camps declined in many text versions with a single melody (albeit with many different arrangements) that has known, like so many other Scottish eighteenth-century songs, a notable fame among the musicians of German romanticism and in good living rooms over England, France and Germany.

With the title “My Ain Kind Dearie O” it is published later in the Scots Musical Museum vol I (1787) (see here) on Robert Burns’ dispatch to James Johnson with the note that it was the version originally written by the edinburgh poet Robert Fergusson ( 1750-74).
‘Will ye gang o’er the leerigg, my ain kind deary-o! And cuddle there sae kindly wi’ me, my kind deary-o! 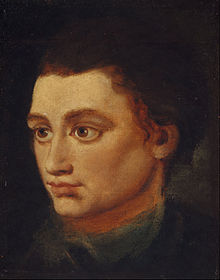 Robert Fergusson died only 24 years old in the grip of madness while he was hospitalized in the Edinburgh Asylum because subject to a strong existential depression (and yet there are those who insinuate it was syphilis); he had just enough time to write about eighty poems (published between 1771 and 1773) and was the first poet to use the Scottish dialect as a poetic language; he lived for the most part a bohemian life, sharing the intellectual ferment of Edinburgh in the period known as the Scottish Enlightenment, always in contact with musicians, actors and editors; in 1772 it joined the “Edinburgh Cape Club”, not a Masonic lodge but a club for men only for convivial purposes (in which tables were laid out with tasty dishes and above all large drinks); for Robert Burns he was ‘my elder brother in Misfortune, By far my elder brother in the muse’.

Burn rewrote the poem in October 1792 for the publisher George Thomson, to be published in the “Selected Collection of Original Scottish Air” (in what will be the most commonly known version of The Lea Rig) published with the musical arrangement of Joseph Haydn (who also arranged the traditional My Ain Kind Deary version); and he also wrote a more bawdy version published in “The Merry Muses of Caledonia” (1799) under the title My Ain Kind Deary (page 98) (text here)
I’ll lay thee o’er the lea rig, Lovely Mary, deary O

and in the classic version on arrangement by Joseph Haydn
ASCOLTA Jamie MacDougall & Haydn Eisenstadt Trio JHW. XXXII/5 no. 372, Hob. XXXIa no. 31ter

NOTES
1) the morning star
2) milking time is early in the morning
3) or “birken buds”
4) or irie
5) in the copy sent to Thomson Robert Burns wrote “wet” then corrected with wild: a summer night with severe air with lightning in the distance
6) or “I’d”

Compare with the version attributed to the poet Robert Fergusson