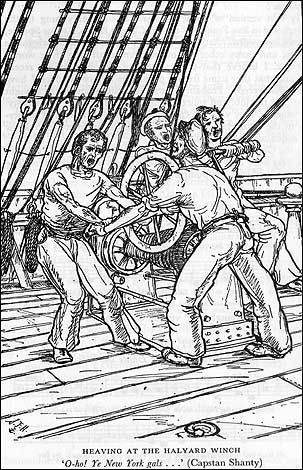 The second sea shanty sung by A.L. Lloyd in the film Moby Dick, shot by John Huston in 1956, is a windlass shanty or a capstan shanty. As we can clearly see in the sequence, crew action the old anchor winch.
Kenneth S. Goldstein commented on the cover notes of the album “Thar She Blows” by Ewan MacColl and A.L. Lloyd (1957)”A favourite shanty for windlass work, when the ship was being warped out of harbour at the start of a trip. A log rope would be made fast to a ring at the quayside and run round a bollard at the pierhead and back to the ship’s windlass. The shantyman would sit on the windlass head and sing while the spokesters strained to turn the windlass. As they turned, the rope would round the drum and the ship nosed seaward amid the tears of the women and the cheers of the men. This version was sung by the Indian Ocean whalers of the 1840s“.

The song starts at 1:50, when the catwalk is pulled off and the old spike windlass is activated, model replaced by the brake windlass around 1840

There’s some that’s bound for New York Town
and other’s is bound for France,
Heave away, my Johnnies, heave away,
And some is bound for the Bengal Bay
to teach them whales a dance,
and away my Johnny boys, we’re all bound to go.
Come all you hard workin’ sailors,
Who round the cape of storm (1);
Be sure you’ve boots and oilskins,
Or you’ll wish you never been born.
1) the curse of every sailor at the time of sailing ships: Cape Horn

This sea shanty presents a great variety of texts even with different stories, so sometimes it is a song of the whaleship other times a song of emigration. (a collection of various text versions here).

WHALING SHANTY: HEAVE AWAY MY JOHNNY (JOHNNIES) – WE’RE ALL BOUND TO GO

Dubbing Cape Horn was a feared affair by sailors, being a stretch of sea almost perpetually upset by storms, a cemetery of numerous unlucky ships.
The wind dominated the bow, so the ship was pushed back for days with the crew exhausted by effort and icy water that was breaking on all sides.

Louis Killen from Farewell Nancy 1964  “capstan stands upright and is pushed round by trudging men. A windlass, serving much the same function, lies horizontally and is revolved by means of bars pulled from up to down. So windlass songs are generally more rhythmical than capstan shanties. Heave Away is usually considered a windlass song. Originally, it had words concerning a voyage of Irish migrants to America. Later, this text fell away. The version sung here was “devised” by A. L. Lloyd for the film of Mody Dick”

NOTES
1) Kingston upon Hull (or, more simply, Hull) is a renowned fishing port from which flotillas for fishing in the North Sea started from the Middle Ages. In the song, the departing ships also head for the Indian Ocean (see routes )

Barbara Brown & Tom Brown  from Just Another Day 2014, from the repertoire of the seafaring songs of Minehead (Somerset) collected by Cecil Sharp from only two sources – the retired captains Lewis and Vickery.

Genevieve Lehr (Come And I Will Sing You: A Newfoundland Songbook # 49) was released by Pius Power, Southeast Bight,  in 1979 Genevieve Lehr writes “this is a song which was often used to establish a rhythm for hauling up the anchors aboard the fishing schooners. Many of these ‘heave-up shanties’ were old ballads or contemporary ones, and very often topical verses were made up on the spur of the moment and added to the song to make the song last as long as the task itself.”

The Fables from Tear The House Down, 1998 a cheerful version with a decidedly country arrangement

NOTES
1) duds in this context means “clothes” but more generally the large canvas bag containing the sailor’s baggage
2) Saint John’s, known in Italian as San Giovanni di Terranova for the Marconi experiment, is a city in Canada, capital of the province of Newfoundland and Labrador, located in the peninsula of Avalon, which is part of the Newfoundland island
3) clearly a “flying” verse taken from the many farewells here is Nancy answering

I TELL ME MA