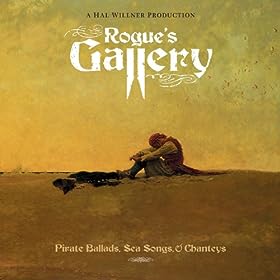 Questa sea song è stata registrata precedentemente nel 1956 da Paul Clayton nel suo album ” Whaling And Sailing Songs From the Days of Moby Dick 1956 – Tradition TLP 1005 LP. Così nelle note di copertina Paul Clayton scrive di aver trovato la canzone in un giornale di bordo della baleniera “Lucy Ann”: “Nothing in shipboard life stirred the whaler’s emotions like a burial at sea. A whaling log will contain numerous entries concerning the stale of a sick man, and then, one day, a brief note is written giving an account of his burial, perhaps with a cross or coffin drawn in the section normally reserved for whales sighted and taken. I recovered this song from a journal kept on the ship Lucy Ann, of Wilmington, Delaware, on a whaling voyage out of New Bedford 1837- 1839.”

“..the Lucy Ann, made three successful right whaling voyages for Wilmington. The ship was a typical whaler, a former merchant ship measuring about 111 feet in length and 26 feet in the beam. Her tonnage was 309, about average for a whaler of the day, and she was a slow but sturdy work horse, well-suited for Wilmington service. In 1837, after nineteen months at sea, she returned from the Indian Ocean with a fair cargo.’ Her second voyage from 1837 to 1839 was more successful, but because of company obligations, its profits, like those of the first, were insignificant. Out again in July, 1839, the vessel returned full almost two years later. She had taken a substantial quantity of sperm oil, a more valuable commodity than common whale oil, and her profit of $12,809 was one of the best in company history.” (tratto da “A pennsylvanian in the Wilmington whaling trade 1841-1844” di Kenneth R. Martin & Bruce Sinclair pag 33 qui)
Ho trovato però solo due diari scritti durante i viaggio della Lucy Ann, ma in periodi successivi a quello indicato da Paul Clayton: uno quello di John F. Martin “John Martin’s journal : a voyage on the whale ship Lucy Ann of Wilmington, Delaware, 1841-1844”, l’altro di Martha Brown “She Went A-Whaling 1847 Journal Martha Brown Whaling Ship Lucy Ann” diario riferito al periodo 1847-1849

It was not unusual for an inquisitive, intelligent mariner to keep a diary of his experiences at sea. It was unusual, though, for a man to keep two simultaneous, contrasting accounts; yet this is what young Martin did. One of Martin’s journals is a terse and selective compendium of weather data and navigational reckonings, fleshed out with brief entries describing the chasing and killing of whales. This spare volume, which is in the manner of a record book, is now at the Historical Society of Delaware. Its text resembles the impersonal accounting of an official logbook, but it has much pictorial interest, for Martin took pains to illustrate dozens of the Lucy Ann’s whaling encounters with meticulous water colors. The document is enhanced by an illuminated frontispiece, drawings of the sperm and right whale, and an exciting whaling scene. Upon his return to Wilmington in 1844, Martin gave this journal to a former shipmate, William McGahey of Philadelphia, who had sailed with him on the Jefferson. Martin remained a mariner, making occasional stops at McGahey’s home. McGahey apparently cherished his friend’s gift. He gave the Martin journal to his own son, James, of Darby, Pennsylvania, and that gentleman presented it to the Historical Society of Delaware in 1902, more then twenty years after Martin’s death.38 James McGahey remembered John Martin as a man of many talents, “something more than an ordinary man, although in appearance he was a typical Yankee sailor of the period.”
Martin’s second, longer “Journal of a Voyage in the Whale Ship Lucy Ann,” kept in diary form, is now in the manuscript division of the Chicago Historical Society library, where it was acquired as part of a collection during the 1920s. The Chicago journal is more than an interesting whaleman’s account; it is an important piece of Americana. Aboard the Lucy Ann, Martin lavished great care on his diary, producing a spectacular private record. Like many seamen before the mast, Martin’s knowledge of punctuation and grammar was slight, but his powers of observation and his mastery of storytelling more than overcame such formal deficiencies. The writer was clearly a hale, fine-spirited man with a knack for showing the lighter side of even the grimmest situations. Moreover, he sensed an excitement about whaling that is surprisingly lacking in many whaling journals. There is no doubt that Martin carefully selected and narrated incidents that would entertain the landlubbers at home; his journal is not by any means casually or spontaneously written. Unlike many journalists, he avoided dwelling only on the commonplace miseries of a whaling voyage: boredom, overwork, and woefully poor food. Even when he did grouse, it was usually with a sense of good humor. His narrative is further enhanced by his innate curiosity, which inspired him to render perceptive descriptions of remote places, flora, and fauna. And, like his shorter journal, his diary is visually beautiful. It contains over two dozen amateurish but virile and handsome water-color illustrations: whaling scenes, island views, sketches of whales and fish, ship paintings, and detailed renderings of the tools of the whaleman’s trade.  (tratto da A pennsylvanian in the Wilmington whaling trade 1841-1844 di Kenneth R. Martin & Bruce Sinclair, pg 33-34)

In 1847, Martha’s life changed … for the worse. She sailed with her husband on the Lucy Ann of Greenport, Long Island, leaving home on August 21, 1847 — because Edwin had told her to do it. Going on voyage wasn’t her idea at all. continua

ASCOLTA Paul Clayton  in ” Whaling And Sailing Songs From the Days of Moby Dick”, 1956