The Other World is widely described in Celtic stories as a wonderful land, Elsewhere is an island beyond the sea (or under the sea) located symbolically in the West. Although Elsewhere can only be achieved by death, some Celtic legends and poems tell of poets, semi-divine heroes or simple visitors who got there in life. (first part)

From Ireland the love story between the beautiful Etain (or Édaín) and the god Midir (or Midhir or Mired), son of Dagda. When the ancient gods (Túatha Dé Danann) retreated into the burial mounds, Midir lived in the Sidhe of Bri Leith (now Slieve Golry, near Ardagh, County of Longford.) Today a minor site from the archaeological point of view, but once a center of great  mythological importance like the Sidhe of Brú na Bóinne (Newgrange), the story of Etain’s abduction takes place in these two sites. 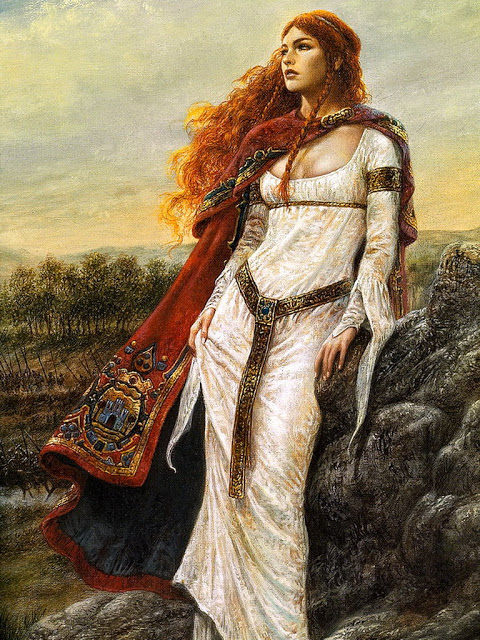 Midir (or Mired) visiting his adopted son Oengus (Aengus Og), met the most beautiful woman in Ireland, Etain, and they lived together at the Brú na Bóinne for a year and a day; when he returned to his kingdom he did not want to be parted from Etain, and so he brought her with him.

Midir was already married to Fuamnach, but the practice of concubinage was normal with the Celts, even though the first wives were jealous of newcomers. So Fuamnach showed herself compliant with her husband and was cordial with Etain, but meditating on revenge.
Thanks to the magical arts she transformed Etain into a pool of water starting a surprising cycle of transformations: the heat in the throne room dried up the pool which turned into a worm and the worm became a big butterfly (or a scarlet fly).
But Midir did not console himself and held the butterfly on his shoulder as the only companion, making his first wife more furious.

So Fuamnach summoned a magical storm that  dragged the fragile butterfly away from Midir and Etain wandered, perhaps for seven years, without ever being able to rest, until one day Etain was pushed into Ulaid, her homeland, and fell into the wine cup of Etar’s wife  who drank back the butterfly, and turned to her husband, saying “I am with child.” Nine months later, she gave birth to a beautiful baby girl, Etain reborn. 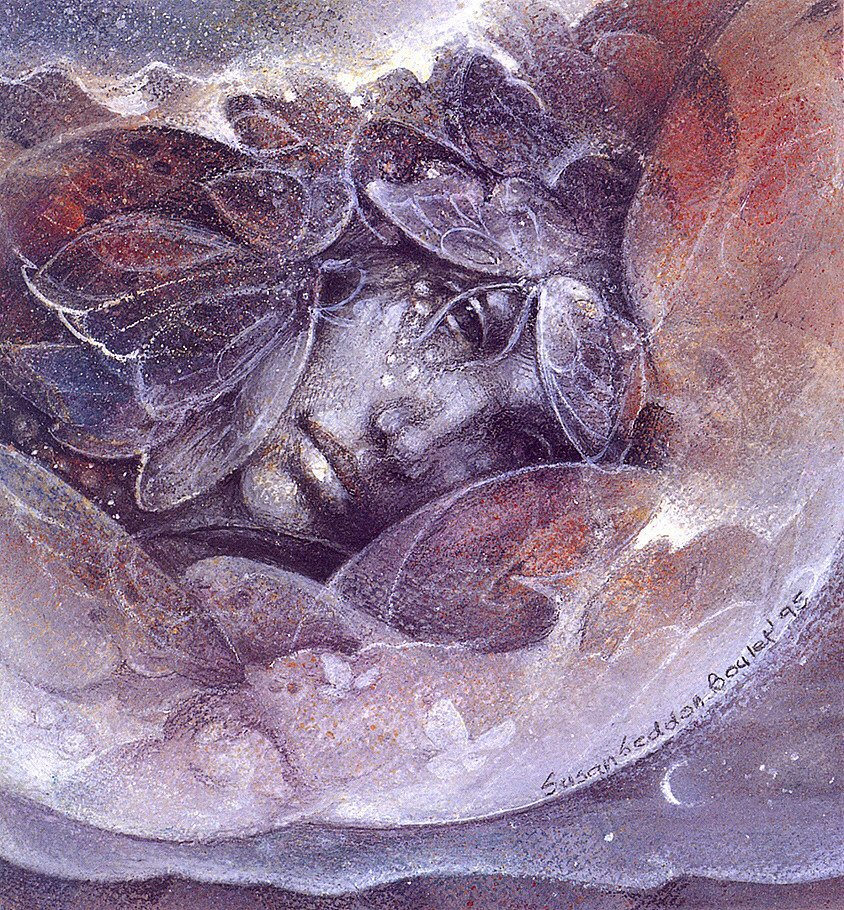 As she grew, Etain became the most beautiful girl in Ireland, and when the king of Tara Eochaid Airem (legendary supreme king of Ireland in the second century son of Finn) , wanted to marry, his messengers brought Etain to him .
But the beauty of Etain was still fatal for Ailill, the King’s brother, who fell in love with her, suffering from the pain of not being able to have her, until he fell seriously ill. So Etain took care of the invalid and Ailill ended up confessing his love for her by telling her that in order to heal his illness he had to succeed in possessing her.
Etain consented, not wanting to betray her husband inside the house she gave a night appointment in Ailill on the nearby hill. Ailill did not wake up that night, but Etain met a man in the shape of Ailill who pretended to be too tired for a relationship. After a couple of nocturnal encounters with the mysterious man Etain thus spoke “I am here to meet a seriously ill man, who must heal, not for you“, thus the man revealed his true identity by revealing their previous love.

The myth is taken from the “Tochmarc Étaíne” (“The Wooing of Étaín/Éadaoin”), written in Ireland in the ninth century – transcribed at the end of the fourteenth century, in the “Yellow Book of Lecan”, which has come down to us.

The lyric was musicated by Angelo Branduardi with the title “Donna di Luce” on a text translated by Luisa Zappa: Midir promises to Etain to lead her into his fairy world.

The game of fidchell

Etain agreed to follow the god, but being already married to Eochaid she did not want to leave her husband without having obtained his permission. So Midir went to the castle of Eochaid to challenge him in the game of fidchell (a kind of chess game). 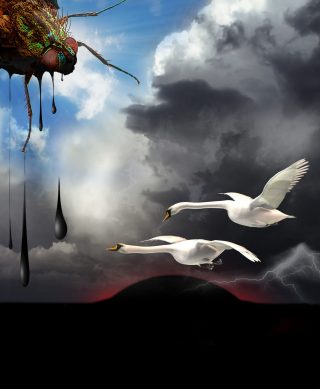 At the beginning the prize of the winner were horses and boats and swords and always Midir lost against the Irish nobleman. In the third game, however, the god cunningly exclaimed “What the winner will ask for will be his”, and this time Midir won and demanded that he be allowed to embrace and kiss the king’s wife, Etain.
The husband, in order not to lose his honor, consented to the kiss, but Midir took Etain in his arms and rose up off the ground. All those present saw two swans go away in flight.
Only with the kiss Etain became mindful of his past, he reminded Midir and their great love, her immortal life in the Sidh and her transformation.