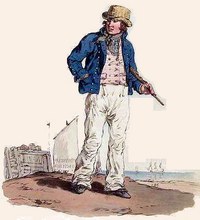 A love story between a young girl who denies her noble and wealthy family and her wealthy life for the love of a young and handsome sailor. For fear he forgets her, she embarks on the ship disguised as a sailor. When their ship returns to the port of London, the girl goes to her parents to request consent to their marriage.

The theme was very popular among the nineteenth-century broadside and the ballad was popularized by the popular tradition of England, Ireland, Scotland and North America. The melody combined with the text is not unique, here are reported only two: fromJoe Heaney (Rosin The Beau) and from Sara Makem (recorded by Bill Leader at the home of Sara, Keady, County of Armagh in 1967).

The cross-dressing ballads decline the theme of the disguise often combined with the sailor’s (sometimes soldier) farewell with the woman who begs him to take her with him, willing to dress up as a man to stand beside him; the image of a woman-warrior and strong, supported by the power of love and therefore willing to go against her family and social conventions is more a story from a novel than an actual chronicle, the women in those times were subdued to the father first and to the husband later, and very few could win the economic independence (there were then the poor ones who did not care about anyone and who ended up badly in the middle of a street, making all kind of work to barely manage to feed the children). These were the times of marriages combined by families and were based on appropriate alliances and young women were not allowed to fall in love with a handsome black-eyed sailor!

"Dante's Prayer" is the closing track of the album "The Book of Secrets" of the Canadian artist Lore ...