The springtime of the year is come, once more we must away: an offshore bank fishery

“The Banks of Newfoundland” collected by Kenneth Peacock in 1952 from James (Jim) Rice [1879-1958] of Cape Broyle, NL, and published in Songs Of The Newfoundland Outports, Volume 1, pp.108-109, by The National Museum Of Canada (1965): a lyrical song  who tells about the difficult and dangerous life of the fishermen, before the 1992 arrived and the end of the cod fishing in Canada for the exhaustion of the stocks.

Tickle Harbour from Battery Included 1988 (track arranged by O’Byrne / Walsh)
This is one of the many songs collected in Newfoundland by Kenneth Peacock and can be found in his major volume of work, Songs of the Newfoundland Outports. The song describes the seasonal nature of fishing on the Grand Banks. During the early days of its settlement, fishermen would leave their homes in Ireland and England for Newfoundland and spend their summer months fishing “The Banks”, returning to their loved ones in the fall year. Fergus wrote a new melody for every third and fourth line, thereby taking the liberty to evoke a sentiment that he feels adds to the pathos of the song.

NOTES
1) The Grand Banks of Newfoundland are a group of underwater plateaus south-east of Newfoundland roughly triangular in shape often overwhelmed by storms, treacherous and dangerous due to the presence of icebergs and the frequent fog
2) fishing schooners went out to sea in May and did not fall until September
3) The mixing of  the cold Labrador Current with the warm waters of the Gulf Stream helped to create one of the richest fishing grounds in the world, but it’s also causes fog in the area, and before the advent of instrumental navigation, it made the Banks very insidious
4) thoughts are approached to the flight of the sea birds of the previous verse using the same verb “go by” for the birds, “go back” for the thoughts
5) “greyhound of the deep” is not a leviathan or a sea monster, but a cutter, the Newfoundland banks are in fact along the orthodox path, that is the shortest line, which unites Europe and America; postal mails darted at great speeds worried only about their ETA (estimate time arrival). Many dories ended up overwhelmed by their passage.

Cod fishing in the nineteenth century

The technique of fishing vessels set up in the nineteenth century foresaw the use of a particular boat called “Banks Dory” built in a serial way and in large quantities from 1850, flat bottom boats for one or two men depending on the size, transported (stacked on top of each other) on the schooners of the fishermen, ie the mother ships.
The fishing technique foresaw that the ship was anchored in a favourable location and launched the dories into the water, which moved away and fished on their own with the palamites. In the evening the cod caught in the day was cleaned on the bridge of the schooner and salted immediately. In exceptional cases it was also possible to fish directly from the schooner, but hoisting large fish to the side was much more difficult, while the fishing yield was lower. The ship returned to port only when the holds were full of salted cod. If much of the catch was made of this fish, other types of prey were also possible. Raising a halibut on board, which could exceed three meters in length and 100 pounds of weight, put a strain on the stability of the boat…
This type of fishing was used in a massive way up to the First World War and was gradually supplanted, starting from 1930, by the use of motorized fishing boats equipped with refrigerators. (translated from here)

At the beginning it was fished with the line, and the fish caught were cleaned and put in salt on the schooner. In the nineteenth century the line is passed to the longline (trawl lines )
Fishing lines also long kilometers, each of which equipped with thousands of baited hooks. A very effective technique that allows scary booty. In New England alone, 60,000 tons of cod were caught in 1895. Which seemed to never end. Even a great biologist and researcher like Huxley said: I believe that the fishing of cod, as well as other resources of the great sea, are inexhaustible.. ..(translated from qui)

But the “cod stocks crashed” were just around the corner.

The factory ships and the end of white cod

The first steam trawler used in the Banks dates back to 1905, the trawl runs on the seabed and collects everything it finds, and so from the second post-war period ever larger ships equipped with large cold stores (factory ships) were fishing in an hour as much as a 1500-1600 boat did in one season. It was in this way that in the mid-70s local fishermen obtained from their government the extension of territorial waters up to 200 miles from the coast, excluding foreign ships from the domination of the Great Banks, but instead of safeguarding their fish resources with a fishing sustainable Canadian fishermen ended up using the same instruments such as sonar, to locate the big fish stalls, while the government made predictions more and more distant from reality by setting dangerously high catch quotas and so in 1992 there were no more cod fishing: thousands of fishermen left without work, boats stopped, factories closed. and so in 1992 there were no more cod fishing: thousands of fishermen thrown out of work, boats beached, canneries shuttered.
To date, the cod fishing in Newfoundland has not recovered, today the economy of that country is based on fishing for lobsters and above all on the exploitation of woodland and mining resources. The cod no longer returned. Fish like the capelin, once codfish prey, have now become very common, and eat the newborn cod. Today, this ecosystem is dominated by crabs and shrimps.. (translated from here)

In 1979, Jacques Cousteau wrote: “We must plant the sea and herd its animals using the ocean as farmers instead of hunters. That is what civilization is all about — farming replacing hunting.”
The future for fishermen: underwater cultivation of algae and seafood, to create a sustainable ecosystem with open source projects to share, read the testimony of Bren Smith

Farming the Sea: why eating kelp is good for you and good for the environment from Patrick Mustain on Vimeo. 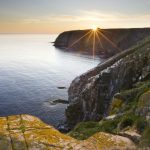