Yet another drinking song, “All for me Grog”, in which “Grog” is a drink based on rum, but also a colloquial term used in Ireland as a synonym for “drinking”. 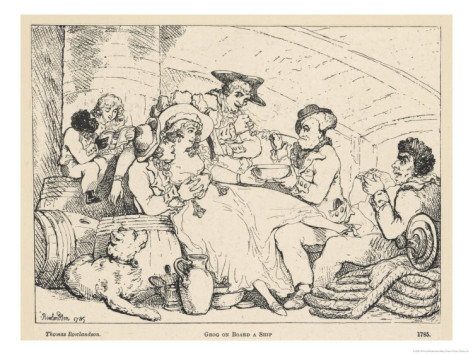 The song opens with the refrain, in which our wandering sailor specifies that it is precisely because of his love for alcohol, tobacco and girls, that he always finds himself penniless and full of trouble. To satisfy his own vices, johnny sells from his boots to his bed. More than a sea shanty it was a forebitter song or a tavern song; and our johnny could very well be enlisted in the Royal Navy, but also been boarded a pirate ship around the West Indies.

Nowadays it is a song that is depopulated in historical reenactments with corollaries of pirate chorus!
Al Lloyd (II, I, III)

NOTES
1) grog: it is a very old term and means “liqueur” or “alcoholic beverage”. The grog is a drink introduced in the Royal Navy in 1740: rum after the British conquest of Jamaica had become the favorite drink of sailors, but to avoid any problems during navigation, the daily ration of rum was diluted with water.
2) lassies: widely used in Scotland, it is the plural of lassie or lassy, diminutive of lass, the archaic form for “lady”
4) nogging: in the standard English noun, the word means “head”, “pumpkin”, in an ironic sense. Being a colloquial expression, it becomes “stubborn” (qualifying adjective)
5) let in = open
6) the use of the mattress is implied not only for sleeping
7) western ocean: it is the term by which the sailors of the time referred to the Atlantic Ocean

( Italo Ottonello)
The grog was a mixture of rum and water, later flavored with lemon juice, as an anti-scorb, and a little sugar. The adoption of the grog is due to Admiral Edward Vernon, to remedy the disciplinary problems created by an excessive ration of alcohol (*) on British warships. On 21 August 1740 he issued for his team an order that established the distribution of rum lengthened with water. The ration was obtained by mixing a quarter of gallon of water (liters 1.13) and a half pint of rum (0.28 liters) – in proportion 4 to 1 – and distributed half at noon and half in the evening. The term grog comes from ‘Old Grog’, the nickname of the Admiral, who used to wear trousers and a cloak of thick grogram fabric at sea. The use of grog, later, became common in Anglo-Saxon marines, and the deprivation of the ration (grog stop), was one of the most feared punishment by sailors. Temperance ships were called those merchant ships whose enlistment contract contained the “no spirits allowed” clause which excluded the distribution of grog or other alcohol to the crew.
(*) The water, not always good already at the beginning of the journey, became rotten only after a few days of stay in the barrels.
In fact, nobody drank it because beer was available. It was light beer, of poor quality, which ended within a month and, only then, the captains allowed the distribution of wine or liqueurs. A pint of wine (just over half a liter) or half a pint of rum was considered the equivalent of a gallon (4.5 liters) of beer, the daily ration. It seems that the sailors preferred the white wines to the red ones that they called despicably black-strap (molasses). Being destined in the Mediterranean, where wine was embarked, was said to be blackstrapped. In the West Indies, however, rum was abundant.