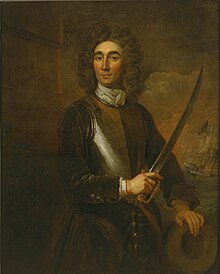 The heroic exploits of Admiral John Benbow (1653-1702) are sung in some contemporary ballads dating back to the days of the Spanish Civil War. He was called “the Brother Tar” because he started his military carrier from below, as a simple sailor; thanks to his ingenuity, the courage and help of his mentor Admiral Arthur Herbert, Count of Torrington.
His activity, except for a parenthesis in which he gave himself to the merchant navy (1686-1689), was dedicated to the Royal Navy. He left the army the degree of master, after being brought before the court martial because of a dispute against an officer, it should be noted that the code of conduct between the officers was very rigid (and even today with military degrees there is little to joke) and after having brought his public apology to Captain Booth of the Adventure and repaid the fine with three months of work without pay, Benbow decided to resign. The following year he became the owner of the frigate Benbow roamed the Mediterranean and the English Channel hunting for pirates, earning the reputation of a skilled and ruthless captain. Returning to the navy in 1689 with the rank of third lieutenant on the Elizabeth, after four months he obtained the rank of commander of the York and he distinguished himself in the naval actions along the French coasts; he was then sent to the West Indies to eradicate piracy and in 1701 he was appointed vice-admiral. It is said that King William had offered the command to several gentlemen who refused (because of the climate) and so he exclaimed “I understand, we will spare the gentlemen and we will send to the Antilles the honest Benbow”

In the early English Navy there was a system of voluntary training: a captain used to take care of young boy and instruct them as long as they were unable to pass the aptitude test. However, there remained a dividing line between the tarpaulin officer, without a high social status and the gentleman officer, the privileged aspirant. In fact, the gentlemen obtained their license of ensign more for relationships of kinships that for merits, so that in 1677 it was introduced an entrance examination that had to precede a compulsory three-year training. But in 1730 they preferred to return to the old system of voluntary training.

His last action, off the coast of Cape Santa Marta , was against Admiral Jean Du Casse and his fleet: from 19 to 25 August 1702; Benbow had seven ships at his command but his captains proved unwilling to obey orders: only on the afternoon of the first day a fight was waged and only the flagship and the Ruby under captain George Walton chased French ships with the intent to give battle, while the other english ships were kept out. The Ruby was put out of action on the 22nd and at this point the Falmouth in command of Samuel Vincent decided to line up with Benbow, but it was seriously damaged and forced to retreat, the same Benbow besieged by the French ships and subjected to a cannon shot had a mangled leg and he was brought below deck, where a war council was held with his officers who had all gathered together on board the flagship.
To see the war action in detail see

Benbow was determined to pursuit of battle, but his captains, believing they had no chance of victory, recommended him merely of pursuing the French ships: Benbow, convinced that a mutiny was being carried out against him, gave the order to return in Jamaica and sent his commanders beheind the court martial on charges of insubordination; Captain Richard Kirby and Captain Cooper Wade were found guilty and shot. Despite the amputation of his leg Benbow died two months after the battle and was buried in Kingston.

The melody is equally popular and it is shared with the Captain Kidd ballad giving life to a melodic family used for various songs.
Among the songs of the sea in the series Sea Shanty Edition for the fourth episode of the video game Assassin’s Creed that include some ballads about the brave captains, to celebrate the victories or heroic deeds that led them to death.
The version in Assassin’s Creed from the text transcribed by Cecil Sharp on the song of Captain Lewis of Minehead (1906) the strophes, however, are halved (I, II, VI)

NOTES
1) Benbow made his career in the ranks of the Royal Navy in the late 1600s until he became Vice-Admiral
2) the West Indian Sea
3) in a fright: panicked
4) the captains who left the battle were tried and sentenced to death by desertion
5) the Ruby supported the attack of the flagship Breda against the French vessels
6) Benbow despite the injured leg (which will be amputated) wants to continue to give orders on the bridge and so requires a cradle to be able to remain seated and stretch the leg crushed, provisionally bandaged by the doctor

Paul Clayton, from “Whaling and sailing songs from the days of Moby Dick” 1954

Entitled “Benbow, the Brother Tar’s song” the ballad was written by William Chappel in his “Old English Popular Music”.
“The tune is a variant of Love Will Find Out the Way, first published in 1651. Originally, it circulated in the world of fashion, but after 1680 it seems to have passed almost exclusively into the keeping of agricultural workers. Chappell collected it from hop-pickers in the mid nineteenth century, and Lucy Broadwood found it in Sussex in 1898.” (from here)
The action is very inaccurate (see above)
June Tabor & Martin Simpson from A cut above, 1982

NOTES
1) the French fleet under the command of Admiral Du Casse was escorting a convoy of troops, the flagship Breda captured the Anne, originally an English ship captured by the French
2) they were actually only 5
3) Benbow was buried in the Parish Church of Kingston (Jamaica)
4) in his honor Robert Louis Stevenson in his book “Treasure Island” inserts an “Admiral Benbow Inn” at the beginning of the story